J.Y. Park Loves the Booty in "Who's Your Mama?" 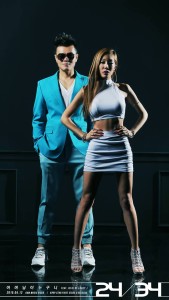 With an MV that will make creepy uncle fans happy, J.Y. Park has come back with “Who’s Your Mama?” In a song that will join Sir Mix-a-Lot in the annals of butt-lovers, J.Y. Park talks about his love for the booty.

Some people will be quick to call foul on the lyrics. This knee-jerk reaction is unneeded. J.Y Park is not reducing a woman to simply a judgment of her measurements. He’s only expounded on things he likes in a woman: not just pretty face, not just a good heart, but also a noticeable butt. You can’t really fault him for that – we all have certain character and physical traits we find attractive.

People may be fawning over Jessi, but her featuring left a lot to be desired. It was no better than any other random, 16-bar rap featuring on a pop song. It lacked substance and it’s still not clear how her so-called “chocolate skin” is related to her curves. Also, in context of the MV, Jessi’s section seems to drag the song a little bit and deescalate the movement of the MV. Her featuring does fit with the other lyrics, though, since the song is about a sexy body and if it’s been inherited from the mother. Overall, the lyrics are just cheesy and ridiculous. But, if that doesn’t matter and you want something simply funny, then “Who’s Your Mama?” fits the bill.

On the good side of things, the music itself is great and groovy. It hearkens quite nicely back to his early tracks “Honey” and “She Was Pretty.” The song starts off with a strong, dirty bass line and then adds a cymbal and actual bass drum.  Synthesizers are added as time goes on and even some scratching is included in the break down. The best part is after the breakdown: the snazzy jazz music kicks in until Jessi’s part. Although this conglomeration of new and old sounds is nice, the song would have been better if that jazz part had stayed longer.

“Who’s Your Mama?” opens with J.Y Park walking into a gym, scoping out – or rather creeping on – the girls using the treadmills, and asking one of them about her measurements. When he hears her waist-to-hip ratio, he naturally begins to sing. For most of the MV we get rotating shots of a gym and colorful studio-beach scenes, where dancing J.Y. Park leers at scantily-clad women.

Never fear, there are some high points of the MV. First, there is how in sync the walking shots are with the beat. That must have taken some coordination as every step taken is on the down beat, especially for the treadmill scenes.

Second, the dance is pretty great. It’s not sleazy, but rather a simple sort of sexy. Well, the dancers at least make it look simple. The way the lyrics and moves match up helps keep attention and tells the story.  For example, when the lyrics discuss not being able to see the size of a girl’s behind while sitting, the girls squat and then slowly stand. The interaction of the dancers also prevents the girls from being props.

Additionally, since this is a J.Y. Park MV, there’s got to be one shot of him being slick. Around the 2:40 minute mark, we are shifted to a jazz bar-style scene during the jazzy break.  All that’s needed is an upright bass and a piano to create the appropriate feel for the break. Add in his snazzy suits, and J.Y. Park does at least look smooth.

The MV tiptoes the line between being so-corny-it’s-funny to being slimy. To sum it up: beautiful women, plenty of butt shots, and bright colors. But, the song is about the booty, so of course there’s plenty of those rear-end shots. The shots are highly clichéd: women dressed in gym clothes or swimwear, riding stationary bikes, or simply walking around.

It’s this aspect of the MV that makes it corny and/or slimy—depending on your perspective. Either you like it, or you’re like one girl in the MV who’s making disgusted faces and rolling her eyes at J.Y Park.

Yes, the song is lame and the MV pretty ridiculous. But, it’s nice to see J.Y Park return to his slick jazzy roots. It’s hard not to “shake that booty” when the hook and groove are so strong.  Is this an example of the overall product outweighing the greatness of a specific part? Yes. However, despite how cringe-worthy the MV and lyrics are, this is J.Y. Park, who can pretty much do what he wants and somehow kill it.