Fiestar Tells the Ex "You're Pitiful" 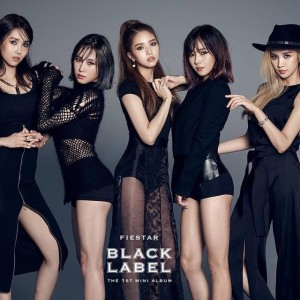 All right fans, it’s time to be honest here. Some of us have had the unpleasant experience of a love gone wrong. Maybe he cheated. Maybe he forgot your birthday — every year. Maybe he did something so unforgivable that you created a voodoo doll of him and tossed it into a fire, hoping he could feel the flames of your wrath.

Whatever the reason, you ended things knowing there was no chance of reconciliation. Unfortunately, your ex can’t seem to respect that message. Thankfully, Fiestar has made things a bit easier with their MV for “You’re Pitiful”.

The timing of this video could not have been better considering recent news stories. If one didn’t know any better, one could almost argue that it was a subliminal dig towards a certain idol who can’t keep his hands to himself. Regardless of who this MV was meant to reach, the message is clear: The ladies want their ex-lover to (insert expletive verb here).

There is a lot to digest in this video; it may even be too much. Symbolism peeks out from every nook and cranny while snippets of the choreography break up the story line. Because theories are endless on what meant what in this particular release, you’re going to have to settle for my personal interpretation of what was happening in this review, but feel free to interject your own ideas in the comments!

First, let’s break down the song itself musically. The melody isn’t anything groundbreaking, but little is in pop music nowadays. The vocals are layered nicely to fit with the gentle strum of the guitar in the background, but there is no real build-up in dynamics — even the rap break is forgettable. Luckily, the lyrics and MV give the song the necessary boost it needs.

The lyrics are pretty straightforward. The ex-lovers treated the ladies of Fiestar badly, yet have the audacity to beg for another shot. This is where Fiestar scoffs at such a proposal, because they remember how awful their exes were in their relationships.

Well, that’s a bowlful of ouch, but it sounds like the creeps had it coming. You don’t just break the hearts of Fiestar and expect them to take you back so easily. They are adamant in their adherence to staying apart. The ladies now view their exes as sad creatures who no longer hold the power to sway their hearts. It’s game over — forever. 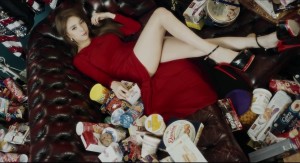 When it comes to the visuals of the MV, there is a lot to digest, both literally and figuratively. Food makes an abundant appearance throughout the video, especially in one shot where Jei rests among a pile of trash. This would suggest a theme of gluttony, so perhaps their exes made excessive demands. The food is half-eaten as well, which would imply the exes didn’t know how to finish what they started.

More scenes show Jei peeping through a hole in the wall at her ex who is drinking and smoking away his woes. Even though she wants to get over him, she can’t help checking in on his activities. Is he miserable? Happy? Does he have a new girlfriend? As he violently throws a glass against the wall, she is reminded of his temper and abuse through flashbacks of their fights, which causes her to walk away from watching him to continue packing his things. As the song suggests, he looks rather pitiful in this state.

Since the story line features Jei as the main lead, the other members only get a few seconds of screen time for their parts. While this imbalance will probably sour some fans, one must remember it’s not the first time we’ve seen a member take a starring role in an MV. That is why the dance scenes are so integral.

The choreography fits well, rhythmically speaking. There is heavy focus on elongating their legs with low camera angles, but it also shows the members looking disproportionate when their butts are the focus. Despite some crazy angles, the ladies do pull off the sexy concept with some elegant chair dancing. 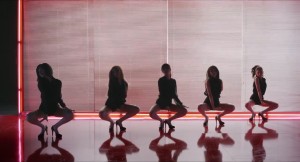 There is one matter I must bring up, however, and that is their footwear. One part of the choreography features a low bouncing move that looks clumsy, and I blame those ridiculously clunky heels. The members appear off-beat and awkward, making for an unintentionally humorous moment.

Bad heels aside, the members of Fiestar all look beautifully distraught, struggling through the aftermath of a break-up. Although their hearts wane occasionally, they need only take one look at their exes for a reminder of why things didn’t work. The song is a decent tune, but it won’t be a surprise if it charts low for being mediocre. On the other hand, the MV presents a story line laced with metaphors that need several thousand views to catch every hidden nugget. If you appreciate egg hunts, then this video will give you a lot to find, but if not, then you’ll become as fatigued as the ladies are with their former lovers.