Eric Nam in a Museum of Memories Singing “I’m OK” 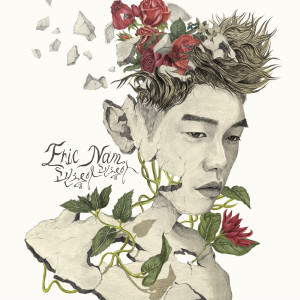 Melodic music-maker Eric Nam is back to mesmerize us once more with the March 5th release of his second digital single “I’m OK.” Following rhythmic singles like “Ooh Ooh” and “Melt My Heart” last year and a featurette on Amber’s album, Beautiful, Eric has shifted his concept to a rather subdued, mindful, and omniscient story personifying past love and the wonderful memories it ultimately offers, even after it has ended. The art embellishing his newfound maturity is a most unique and almost elven composition that carefully summarizes the untraveled depths of his feelings. We see a remarkably beautiful illustration of the singer folded in flowers and vines, gradually crumbling away; heartbreak is ever-painful and hardens one into stone, time chips away at heartbreak until eventually remembrances as sweet as flowers are all that remain.

“I’m OK” unseals in a muted environment with the primary focus on a series of photographs depicting Eric. Eric sitting, Eric lounging, Eric smiling, and Eric playing. Inversely, his soft vocals accompanied by a piano draw our attention to him sitting in a dim room encompassed by empty picture frames. Eric tours a gallery that spotlights different phases in his relationship with his lover. The candidacy in the MV lies in Eric looking back on his memories with pain in his eyes but a courageous smile on his face, and the vow to move on in his heart. 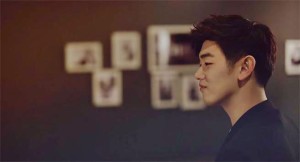 The color scheme has been set out very intelligently and sketches parallels in Eric’s different settings. He wears a suit of shadows in a gallery full of people, in front of picture frames containing memories. This dimension represents his future and his omniscience. On the other side, Eric wears a suit of snow in an empty room on an armchair bordered by empty picture frames. His vocals climb in this dimension, expressing forlornness and uncertainty, poetically representing his past. And a third dimension to his feelings and orientation is observed in him wearing a suit of smoke, a vintage camera reel featuring videos of his lover are projected onto him; his vocals mingle pain and pleasure, height and gravity. This dimension is Eric’s present.

Eric does a great job in his acting, his personality when he was with his lover is dramatically different from it is while he looks back. His heartbreak has lent him maturity and solemnity as well as wisdom and the ability to live in peace.

Musicality-wise, “I’m OK” in the body of a ballad has powerful and soft vocals that are accentuated by minimalist instrumentals that do soar once in a while to spotlight Eric’s vocals. His smooth and supple voice shows his capacity to display deep sentiments, and does justice to the theme that is overcoming and promising oneself. I can definitely imagine this song capturing hearts the second it is played on the radio or performed live by Eric himself. It has a certain temperament that is both serene yet engaging.

The lyrics of “I’m OK” focus on the good but do not ignore the bad. Rather, they give gentle explanations for that bad and then go on to perpetuate the truth of the good.

You became someone who’s gone

You became a love that has passed

As much as all those people were jealous of us

We were so pretty

Eric in his museum of memories is both a despondent and delightful sight to behold. Through “I’m OK,” he takes long-gone lovers on a journey through their worst times and gives them the courage to reach their last destination, which is given by the realization that the reason time heals heartbreak is so that memories, like flowers, have room to grow in its wake. 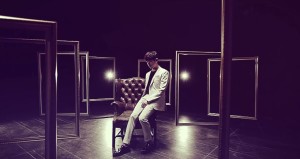 Simple, elegant, and sentimental, Eric Nam delivers a profound musicality in his new single. By focusing on the theme of love, he automatically draws in a high number of young people, but by openly exploring the painful face of love, he draws in many more. His voice is enchanting and agonizing, his appearance is innocent and brooding, and his acting skills give a genuine piquancy to the MV and overall conveyance of the song.