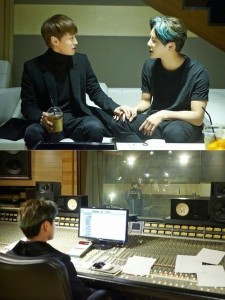 After releasing some killer teaser images, JYJ’s Xia Junsu has saw fit to share another piece of nail biting information for his upcoming album, “Flower”. As if the current level of excitement wasn’t enough, it was revealed that he would be collaborating with Epik High’s Tablo.

This release has brought the two back together after their small stint in the Samsung advertising campaign, ‘Anyband’, from 2007 which involved fellow artists Boa and pianist, Jin Bora. Having shown their chemistry through this release, it could be said that this collaboration is completely overdue!

The song is said to have been written and composed by Junsu with the addition of Tablo’s expressive lyrics. With these two musical ‘geniuses’ working together, it sounds like this collaboration is going to be almost too hot to handle.

After releasing the albums track list earlier this week, Junsu also teased collaborations with artists such as Dok2 and Naul. With Tablo’s addition, it is clear that the album is set to go off with a bang.

“Flower” is going to be released on March 3. So, for those of us that haven’t died from excitement already, especially since the video teasers have not been released yet, it’s only a short while to go! Will you last until then?