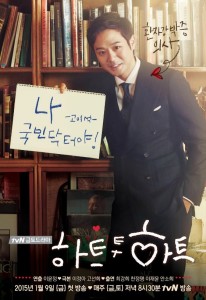 Initially introduced to quirky characters that foreshadow a romance in episodes 1-2, it is now time for things to go deeper in episodes 3-6 of tvN’s Heart to Heart.

We start to see the characters explore their romantic feelings for each other, with romance blooming where there wasn’t any before. Set up with the expected ‘love triangle’ between Hong-do, Ko Yi-seok and Do-soo, this story is full of reversals as the characters deal with the problems that they create or are thrust upon them.

The helmet is still on for Hong-do, as she hides her blushing face from the world. She makes progress though, venturing to ask Yi-seok for help once again, which she is harshly refused. Her and the cop, Do-soo, start to get closer, even touching hands — pause for fan girl squeal! — though it still ends up in her running away.

Finding himself out of a business, Yi-seok coerces Hong-do into becoming his assistant under the condition that he helps her with her anthrophobia. As they start to work together, helping a diabetic streaker and an old woman that still thinks her dead son is alive, it becomes apparent that they are a pretty good team. They make up for each other’s weaknesses with Hong-do serving as the emotional authority as someone plagued by her feelings her whole life while Yi-seok is the intellectual authority with the qualifications of a psychiatrist. Though the two seem to have found some common ground, it seems like they can never stop getting on each other’s nerves.

This story seems like one where the characters take one step forward and two steps back; it is a story of reversals and when not just romance but a love triangle is involved, things start to get complicated. When Hong-do loses the thing that she has been holding onto for 7 years — she has to let go of her feelings for Do-soo as he is getting married — and Yi-seok starts to become more reliant on Hong-do’s company when he is dealing with emotional problems, it is clear that these two are getting closer to each other. All the while, Do-soo is becoming unsure about getting married when he has feelings for Hong-do. Then? 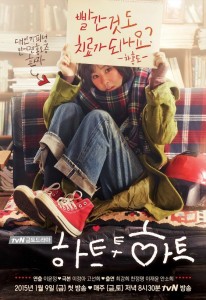 I was not expecting that one so early on in the show, especially in the relationship between Hong-do and Yi-seok that I had perceived as platonic at that point in the drama. Though the two had started to become more reliant on each other, with both searching for each other’s company in times of need every now and then, it seemed to jump the gun a bit. However, it wasn’t played off as a declaration of love which helped it gel better with the plot. You would expect this to have an extremely negative effect on their relationship, and for short period of time it does, but it actually has the opposite effect as it helps them open up to each other.

Hong-do is starting to take steps forward away from the person she used to be, becoming more confident and decisive, especially around Yi-seok. She seems to throw away her inhibitions with him, even laughing and talking about sex with him. The thing I like about Hong-do’s character is that despite running away a lot, she starts to learn to stand on her own with the unconscious help of Yi-seok. However, ultimately it is her decisions that make her stronger, not his decisions for her.

What has the ability to make or break this drama is character development, something we haven’t really seen from Ko Yi-seok. It seems that he hasn’t learned much from his previous dilemma, where he was only accused murder — so nothing really life changing. I am even starting to wonder how he even became a psychiatrist when he still lacks the empathetic capacity to talk to his patients. While Yi-seok’s attitude is expected of an egotist, as a viewer it is grating to see how he treats the people around him. His portrayal sets him up for character development very well, but the show has to be able to follow through.

There is hope that as their interactions continue, she can help him as much as he helps her. We have had examples, like when dealing with old lady that still believes her son is alive, but an overall change does not really shine through like it does with Hong-do. Especially when he makes possibly one of the most stupid decisions of this entire drama so far where he decides to play out a ‘boy who cried wolf’ scenario where he convinces Hong-do that he is in a burning building. Can we please take away his psychiatrist credentials because this man is clearly insane! Maybe, just maybe, that’s what will happen in the next episode or maybe he will actually improve.

Heart to Heart has proven itself to have great potential, all that is left is for the drama to play out.

What do you think about Heart to Heart?