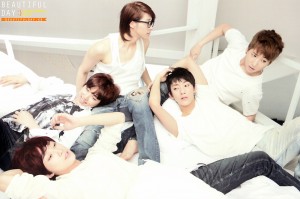 Keen to capitalize on B1A4’s success, WM Entertainment announced that it will be launching B1A4’s “little sister” group in April.

The 8-member girl group is going to be promoted as having good entertainment skills as well as outstanding looks. The debut album will be a mini-album with 3-4 tracks and the company has been working on getting songs for their debut album from different composers for the past year.

Unfortunately, there isn’t much media available yet, but teasers and full-scale promotions are set to begin in March. Although the company has not yet revealed what kind of concept the girls will be going for, many netizens are already speaking out against them “copying” B1A4’s concepts. It seems like WM Entertainment has been doing a lot to prepare their next group for success. With so many rookies and veterans already vying for the spotlight, however, it will be hard for the group to stand out without a killer title track.

So what do you think readers? Are you curious about this new group? Or are there too many rookies already?