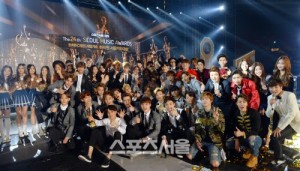 First begun in 1990, the Seoul Music Awards show is held annually by Sports Seoul to recognize outstanding achievements in the Korean music industry. This year, it took place on January 22 at the Seoul Olympic Park’s Olympic Gymnastic Arena, finishing up the month-long affair of star-studded music award shows. Winners for the night were selected using the following criteria: 40% digital + 30% judges’ scores + 20% mobile votes + 10% Sports Seoul’s popularity poll. Despite a seemingly impartial rubric, it comes as a surprise that YG artists were conspicuously missing from the night, especially after a rather strong digital year. KBS-YG feuds again?

In any case, the performances that night were definitely much less flamboyant and more lacklustre than the other award show counterparts, having almost zero collaboration stages and special performances. The sound system was malfunctioning at moments, and the camera action was mediocre at best. As such, the biggest “performance” of the night would have to be Taeyeon’s fall, when a stage lift was prematurely lowered after her performance. Fortunately, the fall wasn’t too serious; the organizers issued an apology, and the SNSD leader is currently recovering from her pulled back muscle.

Without further ado, let’s check out some of the more exciting stages for the night.

As usual, BTS pleased us with a special intro stage featuring solo dances by Jung-kook and Jimin. You never really know what surprise BTS is going to spring on the audience during their short five minutes on stage, and indeed the dance duo performed a specially customized choreography to blow our minds away. They followed up with their title track “Boy In Luv,” and once again, they never fail to disappoint with their on-point choreography and high energy. One of the strongest performances for the night, even Jackson couldn’t keep his fanboy feels under control.

Their fellow acrobatic boy group Got7 also impressed with some pretty nifty tricks during their intro. Flips and somersaults in the air never get old, and I’m glad they got the chance to flaunt their neat b-boy skills. Having seven young boys in a group seems to be a magic formula since there’s only one level the energy can head — way up high.

Red was the colour of the night

K.Will is always a joy to watch on stage, his passion and emotion so prominent that the mic issues hardly detracted from it. While most ballad performances consist of a mic stand and minimal stage movement, “Day 1” boasts of an absolutely adorable choreography with the cutest backup dancers.

While Shinee was sorely missing from 2014 and year-end festivities, at least we were still treated to the boys’ impeccable live performance skills in the form of Taemin. Whether or not you’re fan of “Danger,” there’s no doubting the amount of professionalism and slickness in this stage. He’s essentially this amazing fluid being, able to pull off any dance moves while making it look cool. Can’t believe the maknae’s all grown up now.

Although this stage was concluded with a rather unfortunate accident, the Taetiseo girls never fail to put up an enjoyable performance with their dynamic title track “Holler.” The girls looked dazzling in their sparkly red outfits, and their interactions with the camera were enough to put a stop to our heartbeats.

Eunhae, where are the others?

Although Super Junior was missing from the roster, Donghae and Eunhyuk represented their group members by delivering a tremendously fun and upbeat stage of a slew of the duo’s singles — “Motorcycle,” “1+1=Love” and “Oppa Oppa.” It’s no surprise why their performance was such a delight for everyone to watch, with so much camaraderie, spontaneity, and flashiness happening on stage.

Such a lucky bunch to bring home the Daesang

Not sure if I’m the only one who didn’t know Exo had a song named “Lucky,” but I was rather surprised by their choice to choose this rather saccharine ballad to follow “Overdose.” Still, there’s no denying that the fans loved it, especially with ten pretty boys dedicating the song to them.

At the end of the day, you can always count on Beastfinite for a great performance

So far, Infinite has been succeeding pretty well in performing different remixes of their two promotional tracks “Last Romeo” and “Back” during the year-end shows, so much so that I was worried if they even had any left for this last show. Fortunately, I realized I shouldn’t have doubted Woollim and Infinite, as they continue to change up these two songs while delivering each with powerful vocals, synchronized dance moves and impeccable professionalism. “Back” is such a good performance song — I simply can’t get enough of it.

Another group know for their spot-on live performances, Beast delivered another strong stage, thankfully with the absence of Hyun-seung‘s ramen hair. We are treated to another powerful remix of their two title songs, which rounded up a great 2014 for the boys, even picking up Album of the Year. It’s not often that idols are able to pull off tough dance moves with their vocals still shining over the MR, and Beast, of course, falls safely into that category.

The winners of the night were:

What were some of your favourite performances of the night?