Pinocchio Episodes 5-8: Everyone Has Two Sides

These episodes are centred around the journalism aspect of the drama. I really like the way the writer uses small stories to advance the larger storyline and develop characters. In I Hear Your Voice, there were a total of four major cases that brought the drama from beginning to end, and we’re starting to observe this in Pinocchio as well, with these episodes focusing on the story of the woman who passed away from exercising and the icy road stories. Of course, there is also some action going on in the background, such as the rivalry between YGN and MSC, development of love lines and Ki Jae-myung’s murder of the three factory workers who’s lies had contributed to the defamation of his father, which has been underlying the plot yet is never brought fully to light.

One major motif that has been emerging in the past few episodes is the two-sidedness of people. By two-sidedness, I don’t mean the disparity between the image they choose to show in public and the way they really are, but the unconscious difference in the way they behave towards certain people or in certain situations. The most obvious example can be observed in Jae-myung — although he is a good person most of the time, judging from his refusal to accept money for the damaged truck bumper and his initial friendliness towards Choi Dal-po, he transforms into a cold-blooded murderer when he comes across the factory workers, and his attitude towards Dal-po also becomes hostile when he learns that Dal-po is a journalist. At the end of episode 8 however, the pendulum seems to be swinging back again in the other direction, as he risks his life to save a little boy in danger of being hit by a truck, because the boy reminded him of his brother.

Dal-po also shows this two-sidedness in the way he handled the story of the woman who died from excessive dieting. In the first few episodes, he seemed to stand on some sort of moral high ground when it came to journalism, calling out Choi In-ha for her opinions during the debate and confronting In-ha’s mother. However, despite his smarts in obtaining details of the story and the CCTV footage, he failed to look deeper beyond “the woman was dieting to pursue beauty” and find out that she was in in fact losing weight to be eligible to donate an organ to her ill daughter, which is the story that In-ha managed to uncover. In that sense, he is no different from the reporters who destroy families with their careless words, and a flashback to the words he spoke to In-ha during the debate remind us of this. I also find the irony of In-ha having been the one to uncover the full story a nice touch. 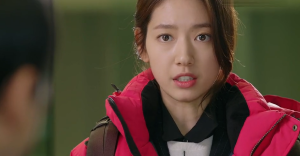 On a lighter note, I am really liking the character In-ha in this drama. Since her recent projects Park Shin-hye has been labelled as a actress who always plays a weak woman in dramas, but in Pinocchio her character is surprisingly strong. It’s difficult to be as honest as In-ha is, and although to a large extent she doesn’t have a choice when it comes to telling the truth, instead of being quiet (like the game show host in the first episode said most Pinocchios are), she dares to say what she thinks. Whether it be standing up to her seniors on why she is not sorry for not simply standing by and watching people slip on icy roads, or confessing her feelings to Dal-po, she shows bravery by speaking words that for most people would be hard to say, even if it means beating herself up for it afterwards.

In-ha’s honesty is also helping move the plot development at a rapid rate. While love lines in K-dramas usually involve a lot of pushing and pulling with the male and female leads taking turns falling for and rejecting each other, Pinocchio is one of quickest dramas to establish this relationship I have ever seen. Although with twelve episodes yet to go I don’t expect it to be smooth sailing all the way, it’s refreshing to see Dal-po and In-ha interacting with ease now after having confirmed that their feelings for each other are mutual. Their relationship would probably not have began so early if it had not been for In-ha’s initial confession, as Dal-po seemed to have been ready to continue denying his love for her until he realised she felt the same for him.

In contrast, other character relationships have not been going as smoothly as that of the two main characters. In-ha’s mother, sticking to her cold anchor persona, refuses to admit In-ha did well on discovering the facts behind her first story (and giving MSC’s viewer ratings a huge boost), bringing much disappointment to In-ha. Furthermore, Dal-po doesn’t admit his identity to his brother, causing many misunderstandings between the two, and frustrating viewers like me who just want to see a warm, brotherly reunion between the two.

While the clichés (this time, the wide-eyed kiss scene and back hug scene that seem to be  mandatory in every K-drama) and coincidences I mentioned in my previous review of this drama are still present, they become less prominent and eye-roll-worthy as the storyline intensifies. The drama continues to be humorous and thought-provoking, and makes me look forward to my Wednesdays and Thursdays every week.