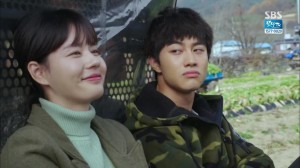 After becoming part of the village and then finding love, episodes 9-12 of Modern Farmer are about when those we love don’t treat us the way we want them to. Each of our rockers’ love lines takes a turn for the worse, and even the quirkiest characters in the village show a more serious side.

Ki-joon (Kwak Dong-yeon) continues to be the most immature when it comes to his feelings. After seeing Bool-ja’s (Han Joo-hyun) makeover into a pretty young woman, he is more confused than ever. A series of flashbacks show when he first started having these kinds of feelings with a girl, but he dismisses them as excitement, surprise, or getting flustered. He finds himself admiring Bool-ja, even calling her by her real name Hwa-ran more often. He desperately tries to stay in control, but the effect that she has on him is confusing and new; even drinking on the rooftops cannot help him understand what is happening. He doesn’t want to be in love, but there is nothing he can do.

Interestingly enough, the show uses Ki-joon  and Bool-ja to make fun of the typical relationships we see in dramas. Right on cue a young immigrant shows up who is not only handsome, but also nice. Ki-joon acts out the well-worn dramatics we see all too often. He denies his feelings for Bool-ja, treats her and the other man like dirt, and then tells her in anger not to smile at anyone else. The series shows how immature his behavior is, and the whole village is quick to condemn it. 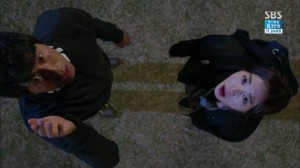 Our naïve Han-chul’s (Lee Shi-un, Reply 1997) fantasy finally implodes after Soo-yeon (Kwon Min-ah) snaps and screams at him. He sees that she is not the perfect angel he thought and falls into deep depression. When the medicine of love evaporates, the pain of his illness inevitably returns. Even a chance meeting on the bus only brings him more heartbreak. It’s hard for him to accept that someone he loved so much could treat him so cruelly. Despite this, Han-chul does help her without asking why exactly she’s being chased by men in black suits. His loyalty begins to win her over, and her words become a bit less acidic. It’s not his dream relationship, but Han-chul still loves her. However, even he finds it hard to accept the possibility that Soo-yeon might be in a lesbian relationship with her co-worker.

Min-ki, Yoon-hee, Hyuk, and Yoo-na are all becoming entangled in an ever shrinking web. Yoon-hee (Lee Ha-nui, Pasta) takes some cautious steps forward to show Min-ki (Lee Hong-ki, FT Island, You’re Beautiful) her affection, but his feelings for Yoo-na bring out her jealous side. It’s difficult for Yoon-hee to be vulnerable, so she tries to hide her hurt feelings with anger and taunts. Without realizing it, Min-ki continues to raise her hopes that he sees her as a woman, but then he stomps on them. Meanwhile, on the sidelines Hyuk (Park Min-woo of Roommate, Flower Boy Ramen Shop) tries to shed his joker image and show his true interest in Yoon-hee. He helps her in any way he can but finds that he has teased her too much; now she doesn’t believe a word he says. The arrival of Yoo-na (Han Bo-reum of Dream High) in the village only complicates things further. Hyuk and Yoo-na continue to share some unknown secret about the past. The fact that 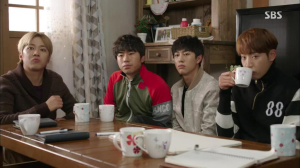 It’s refreshing that for the main love line, the series does not make any of the characters into the stereotypical bad person often seen in dramas. Each one is a decent person who deserves love, which makes it hard to take sides. Even Yoon-hee can see Yoo-na’s good side. A back injury makes the always independent Yoon-hee as helpless as a baby. Yoo-na feeds her and even takes her to the bathroom in a very humorous sequence. The lack of “bad people” also makes it a bit more difficult to guess how each relationship will play out. Unless there is a sudden shift in circumstances at least one person is going to be let down.

With so many sub-plots about relationships, it’s impossible to put them all in one article. Was there any storyline in particular that moved you?

I personally liked the small bit with Man-goo (Park Young-soo) and his Uzbek wife. I was worried she would be just used for comic relief, but the series did go a little deeper. Although she has assimilated as much as she can (she even speaks Korean and cooks Korean food) she still feels inadequate. Her foreignness makes her son a target for bullying which makes him resent her. There is literally nothing she can do to be more Korean, but it still isn’t enough. Luckily, Man-goo is there to show his son and his classmates that having a foreign mother is nothing to be ashamed of.