Liar Game Episodes 9-10: A Bit of Warm and Fuzzy 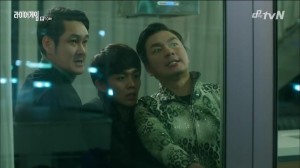 We enter into the fifth round of Liar Game, with Do-young and Dal-goo remaining as contestants because. . . I have no idea. This is honestly the only thing I dislike about Liar Game. HOW DO THE ENTRIES WORK? It appears that once someone takes part in a game, even if they were acting as help to a contestant, they become contestants themselves. This would be why Woo-jin got eliminated in game 2, but was able to play round 4: he aided Da-jung in round 3. Seriously, this makes no sense whatsoever. It is a competition game, why do they keep bringing new people in? Did they eliminate too many people too quickly? I don’t understand.

After the “what the hell” above, we move into this week’s game: smuggling cash from one bank to another past inspectors from the other team. If the inspector passes the smuggler, or guesses they carry less than they do, the smuggler has succeeded. If the amount chosen is equal or higher, the cash goes to the inspectors team. If an inspector accuses the smuggler of having cash when they don’t, half of the guessed amount goes to the smugglers’ team. The first team, selected by Do-young is himself, Actor Gu, Bulldog, and Sung-joon. . . which puts Jamie on Team Da-jin-goo.

Very quickly, the game becomes about getting in people’s heads. Everyone tries to unsettle everyone else, and no one really knows how to react. Dal-goo claims he can smell the amounts of money, Da-jung offers cooperation, Woo-jin acts like a live-action grumpy cat, and Do-young loses his goddamn mind.

These two episodes chronicle Do-young’s slide down the slippery slope from “creepy bastard” to “you can smell the crazy on him”. He takes full command of his team, getting a little too close to fire, and most importantly, claims that money is alive. That it is not controlled by people, but that money controls people and he has a special connection with money. Seriously, I have no problems doubting that he was part of cruel psychological experiments as a child. 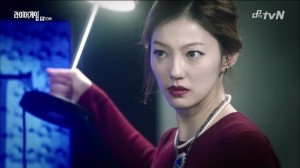 On the plus side, it’s comforting to know that I’m not the only one who has started to doubt if Do-young is human. His shell is beginning to crack, but there’s nothing to be revealed when it does. Every single person thinks that he is an empty shell, a veneer of calculating manipulations stretched over nothing. It gets to the point that his own team performs a mutiny just to keep him from winning.

The true star of these episodes, though, are Jamie and Da-jung. This is where Da-jung’s constant unfailing kindness towards the other players starts to pay off. Last week raised the question of what good is trust when everyone is out for themselves. This week gives the answer: it feels good to be able to trust people. Every other person is getting tired of the lies and deceit and mistrust of the game. Being that cynical and doubtful is exhausting, and just makes you want to trust someone more.

Earlier in the series, Woo-jin said that Da-jung’s ability to sway people to her side was her superpower. That by simply being a sweet person who liked to be nice, she had a magnetism that could draw people to her, and this point has been proven, slowly and steadily from the beginning. First Woo-jin, who hates people like her, but only a few weeks later, declares himself her guard dog. Dal-goo, who wanted to become the opposite of her, but couldn’t resist her charm. PD Lee, who tracks down Da-jung’s father and pleads with him to tell his daughter he’s alright, for no reason other than Da-jung wearing her down. Most important of all is Jamie.

From her beginning game, Jamie has been the sidekick manipulator. Sure, she can’t compete with Woo-jin or Do-young, but anyone else is putty in her hands. Time after time, we’ve seen her stab everyone in the back, constantly playing each person against the others. Yet here, where she seems set to stab her team in the back again, she doesn’t. Da-jung tells her, without judgment, that she can be whoever she wants. It’s Jamie’s choice. Who does she want to be? 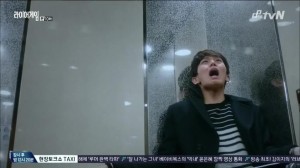 And when faced with a group of friends, people who have each other’s backs, who joke and bond and spend time together because they like to, she decides. She doesn’t betray her team, and for the first time, she is greeted with affection and cheers by the other players. She isn’t loathed by every person in the room. They offer her a ride, just because. And you can see the look on her face as she wonders “Is this what it’s like to have friends?”. Yes, Jamie. Yes, it is.

Sadly, the warm and fuzzy feelings brought out by Jamie’s redemption and the resolve of Actor Gu, Bulldog, and Sung-joon to continue aiding Da-jung is cut short by plot. Sung-joon — a talented hacker — managed to find some dirt on Do-young; namely that he is behind the game and was a part of L Company before it’s destruction. Unfortunately, he was killed for his actions. More unfortunately, anyone who sees episode 10 is going to develop an aversion to elevators for a month. Even more unfortunately, Da-jung learns via Liar Game that Woo-jin is responsible for her father’s debt. Worst of all, Woo-jin learns that Do-young was an orphan from the orphanage his mother ran . . . and Do-young claims that Woo-jin suffered there, too. He just blocked it from his memory.

I hate to say it, but Woo-jin going through the same experiments as Do-young makes sense. What he does — reading microexpressions and body language — can be learned in two ways. One is a lifetime of study, which, considering he’s thirty, is not likely. The other is being naturally gifted, and that almost always coincides with an abusive childhood. Honestly, if it turns out that Woo-jin wasn’t experimented on, I am going to be pissed.

One week of Liar Game left. I really hope my heart can take it.