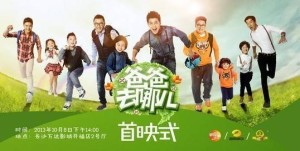 Hunan Television’s Mandarin version of the hit Korean show has been a massive success ever since its debut. More than 600 million people tune in each week, including China’s President and General Secretary of the Communist Party Xi Jinping. It averages 4.3% in viewer ratings at a time when only a handful of shows get more than 1%. 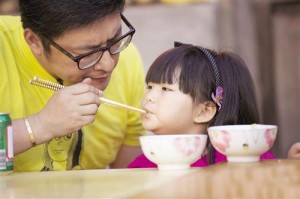 Like the Korean original, the show follows five celebrity fathers taking their children to the countryside or exotic locations like New Zealand. Missions like selling vegetables, riding camels, and fishing bring out all of the cute, curious, and sometimes spoiled antics we expect from children.

But a large part of the show’s appeal is seeing fathers try to bond with their children and the insights that come with it; after all, the fathers joined the show because they felt they didn’t spend enough time with them. A survey by Chongqing Morning News revealed that 81% believed that fathers do not have large enough roles in educating their children and only 17% could say that their own fathers had a principal role in raising them.

(Turn on cc for English Subtitles)

It’s obvious at the beginning that many don’t have basic parenting skills like: how to calm a crying child, how to make breakfast, or how to braid their daughter’s hair. Their failures make viewers laugh, but it’s their whole-hearted attempts and improvements that make them endearing. After a particularly tiring episode, actor Guo Tao (郭涛, 2013 season) confessed, “I’ve only been taking care of my son for three full days, and I feel like breaking down. I can’t imagine how my wife managed to do this for the past six years.” 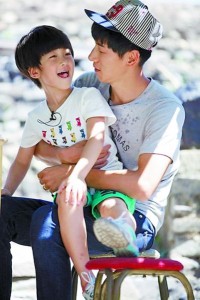 Each father also has his own parenting style, showing that there is more than one way to raise a child. China’s number one fashion model Sean Zhang (张亮, Zhang Liang, 2013 season) gained popularity fast by being more of a friend to his son Tiantian (天天,) than a traditional father. His gentle relationship with his son has won him much support online. In contrast, Guo Tao’s traditional parenting style with his son Guo Zirui (石头, nicknamed little stone) has been criticized as being too harsh. But the praise and criticism doesn’t end on the message boards; people are reflecting on themselves and their own children too.

In traditional Chinese culture, the Confucian ideal of filial piety created an environment where the parent’s wants and desires were to be obeyed at all times, no questions asked. In addition, the fathers were breadwinners and disciplinarians while mothers were caretakers. But times are changing and with it are attitudes about parenting and children. These days Chinese parents are seeing the value in listening to their children a bit more, to better prepare them for the modern world. Part of this shift can be attributed to China’s one-child policy where many Chinese children are only children. This makes for a more child-focused rather than an elder-focused family. 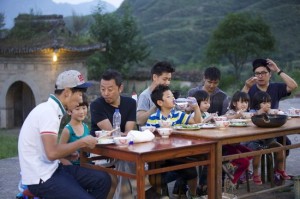 The question of what makes a good father is also showing signs of change. In modern society more and more mothers are working, yet are still usually expected to take care of the household. In a survey by communications firm JWT, more than two-thirds of fathers said that their number one childcare duty was either driving their kid to extracurricular activities or to school. Fewer than 20% thought that changing diapers or making lunch was part of their role. However, this doesn’t mean Chinese fathers don’t want to be more involved. In the same survey, 60% of fathers said they felt they needed more time with their children (compared with women at 37%). In addition, 93% said that the workplace should be more accommodating for dads. 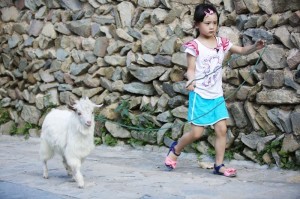 The fathers’ struggles and epiphanies about parenting are honest and relatable. Angela’s father, director Wang Yuelun(王岳伦), was surprised that he couldn’t do a simple ponytail for his daughter and after many attempts had to ask the production staff for help. Many were also at a loss when they were challenged to simply cook a meal for their children.

Each episode features the dads doing something new and learning how to be better fathers along the way. And because the words are coming from the fathers themselves, other Chinese fathers are more open to listening to their advice and insights. Fu Xiaoping, a childhood education expert at Fudan University notes, “By revealing the joy possible in child rearing, the show will help make fathers pay more attention to their kids. The result of the show will be 100 times better than any well-intentioned advice coming from wives.” 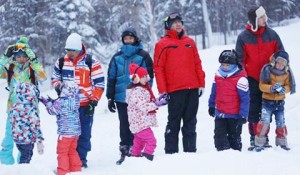 Reality TV can have an impact on people, for better or for worse. Academics found that when 16 and Pregnant aired on television there were spikes in people doing online searches about birth control and having twitter conversations about it; honest portrayals of teen pregnancy from other teens left a far greater impression than another lecture. Apart from the conversations and spinoffs inspired by the show, there are little signs that parenting may be changing. Daxiaoaiwan, a magazine on WeChat, encourages parents to adopt new attitudes about parenting such as letting children play; it gained over 10,000 subscribers in just five months. The Ministry for Education also issued a guide for teachers and parents about raising 3-6 year olds in 2012, the first of its kind. 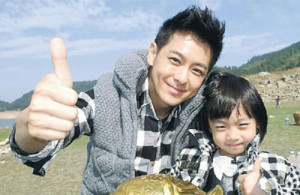 With a second hit season, a movie, and fan memorabilia, China’s Where Are We Going, Dad? has entertained millions with a killer combination of cute kids and celebrity fathers. But more than that, the show is chance for Chinese families to see an alternative to the traditional father role. As more people see and want the benefits of having both parents’ involvement, China is set for a new definition for the word “Dad.”