The King's Face, Episodes 1-2: Gwanghae and His Possible Posse 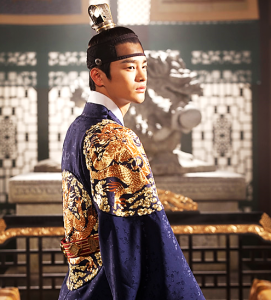 The smell of ink and the vision of stars on arms, KBS’s historical drama The King’s Face is abounding in characters with whom we have already become acquainted, treachery and twists, and flashbacks of a childhood love story. This is all due to the historical K-drama’s fixation on the timeless story and heroism of the Crown Prince and eventual King, Gwanghae of Joseon.

Kim Seung-soo, Ji Sung, Lee Byung-hun, and Lee Sang-yoon have all drawn attention as actors who, over the years, have breathed life into Gwanghae. Whether he is an admirer of fine pottery, an adamant politician, a paranoid ruler in search of a double, or a gentle lover, Gwanghae’s life and reign is the basis for many creative stories and explorations into the Joseon Dynasty.

The cast of The King’s Face, is the main element that differentiates it from other historical dramas about Gwanghae of Joseon. When you  have a recurring main character, the supporting characters or “posse” are those who make him stand out as an individual. No two characters have the same goals, personalities, or values. As shown in first two episodes of The King’s Face, we are stating to get an idea of who may or may not be members of Gwanghae’s posse, and sharers of his destiny.

The fact that its central theme is the arcane and deep realm of physiognomy, is yet another element that makes The King’s Face a drama that committed to distinguishing itself from others alike. By focusing on physiognomy — the study of assessing a person’s character based on their outer appearance, especially the face — , it can begin branching off successfully into related topics like traditional healing, face reading, astronomy, religion, and politics. The first two episodes, impressively enough, have already begun to show off in their knowledge of these areas. 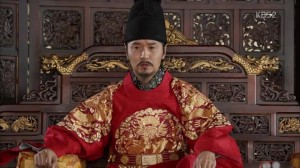 Initially, Gwanghae is more of a quiet and filial son with few parts. The drama opens with a flashback into his father, King Seonjo’s past. We hear phrases and terms like “if the one without the face of the king becomes king, then the people will starve” and “The Secret Book of the King’s Face” thrown around in intervals.

The stress put on these ideas makes you wonder what it means to have the face of a king, whether this drama will deviate from the concept of appearance to meet success, if it is much more intricate than that, and just how deeply the connection between ones face and destiny is rooted.

King Seonjo (Lee Sung-jae) is a hypocrite who is willing to do anything to defend his place as king. His childhood is a vignette of creepy smiles, unsheathed swords, and petrified face readers. He is told that he “does not have the face of a king” and therefore cannot become king. These warnings do not stop him, and his greed and cruelty lead the way as he becomes ruler of Joseon.

As the foil of his father Prince Gwanghae or Hon, is an innocent and filial son who knows no greed or trickery. As the son of a concubine, he is constantly reminded that he is in no place to speak his mind or ask anything of his revered father. Accompanied by his blundering supervisor Young-shin (Yoon Bong-kil), Gwanghae sets out to find the thieves who broke into the royal library while he was reading and what they wanted to steal. 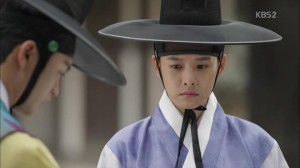 The array of red robes and raspy voices that intervene at any opportunity they get is hilariously votive of the king’s feuding ministers. Although it is still unclear about who is good and who is bad, we know that the two ministers Lee San-hae (Ahn Seok-hwan) and Yoo-seung (Song Min-hyung) are the scheming henchmen of Queen Park (Im Ji-eun) and the Royal Concubine Kim Gwi-in (Kim Gyu-ri), who are also silk-clad rivals and promoters of theirs sons as Crown Prince.

Somewhere along his journey and oblivious to her identity and gender, Gwanghae becomes friends with his childhood love Ga-hee (Jo Yoon-hee). In memory of her late brother and a strange prophecy, she is determined to live as a man for the rest of her life.

Ga-hee is complex, but not a particularly special heroine. At least not character wise. As guaranteed by the mysterious professor of physiognomy Ko San (Lee Ki-young), her destiny is the exact opposite. She is the woman King Seonjo has been looking for, the one who will become the perfect concubine and companion with her moon-like face and beauty.

Gwanghae and Ga-hee’s unanticipated interactions are light and very fun to watch, especially the rain-prayer spectacle at the end of the first episode.

Another more serious accomplishment to note is the semblance of religion included in The King’s Face. I have not seen any other K-drama where a ceremony (with obvious religious undertones) is conducted. Sure the occasional talisman, medicinal herb, curse, or costume is included, but nowhere else do we get a more complicated snapshot of Joseon religion like the “Rain Prayer” ritual in The King’s Face. 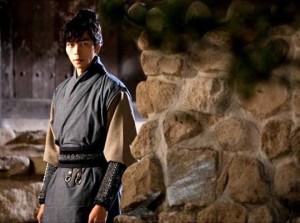 Kim Do-chi (Shin Sung-rok) in a furor of swords, blood, and long dark locks brings with him the hope of a more detailed look into physiognomy. His devotion to his teacher Jung Yeo-rib (Choi Cheol-ho) is heartbreaking and inspiring. We see his resolve stiffen and his demeanor take a rougher turn when his precious teacher is killed.

With the unfolding of the plot of The King’s Face, it is definitely expected that he will have a stronger role and relationship with or against Gwanghae. As for his ties to physiognomy, I have a feeling that he will  deviate from the rebel warrior and show more intellectual and well-rounded characteristics. Let there never be a drama in which Shin Sung-rok is a flat or predictable character.

And even though it is still too early to decide what kind of performance Seo In-guk will deliver as the titular character, the inclusion of his cheerful and comedic nature in Gwanghae’s persona has already given the drama flavours of sincerity and realism. While looking at an imaginary schematic of his earlier roles, Seo In-guk has already impressed us with his versatility.

In Love Rain he was a sweet and innocent musician; in Reply 1997, he was a sardonic and passionate high school student; and in Master’s Sun he was a dreamy and clever ex-soldier. The King’s Face is just more confirmation of the range and genres he is surpassing in with his skill. As Gwanghae, Seo In-guk is reliable and charming. He is beginning to transform the historical hero into a keen reflection of himself.

Although the story of Gwanghae of Joseon has had many variations with different takes on his personality, The King’s Face is distinct and efficient in its attention to elements of court life in the Joseon Dynasty, its characters, and the study of physiognomy.

However, it progresses slowly with some scenes unnecessarily prolonged, and does not give up on certain clichés. The reused childhood love story, twofaced father figure, mysterious vagabond, or noble prince concepts are a few examples.

On the positive side, The King’s Face provides us with engaging depictions of historical figures, their emotions, and the prevalence of justice and democracy.

So if you feel uncertain about whether you should try this drama, I would recommend that you prepare yourself for a rare sight and give it a try!