Get Soaked with Shannon's "Daybreak Rain" 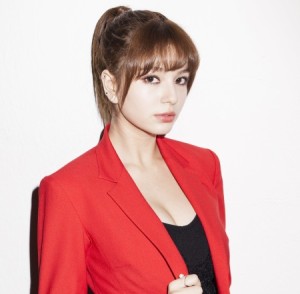 Shannon Williams, the young singer who impressed TV audiences through her appearances on Star King and Hidden Singer, made her solo debut with the song “Daybreak Rain” on December 1. Though MBK Entertainment (formerly known as Core Contents Media) had announced she would debut with them in November, Shannon made a sudden switch to an independent entertainment company called Dap Sound for the release of her first single.

No stranger to bouncing around, she signed with CCM in 2011, joined the now disbanded girl group F-ve Dolls for a short time in 2013, and featured on songs with various labelmates — including Yangpa and SPEED‘s Jongkook — all before finally having the chance to go solo this year. Since this release follows Shannon’s bold move to switch companies only a month before her debut, it would be reasonable to expect the song and MV to be a correspondingly bold productions. What we get, however, is quite the opposite.

Simply put, “Daybreak Rain” is boring. A pop ballad that isn’t particularly catchy or memorable, it’s likely to be forgotten among the year end hustle and bustle that captivates the attention of most K-pop fans. Even though Shannon’s voice sounds wonderful, the song is too average to allow her abilities to shine as something truly special. This year has seen many powerful vocal performances, even from  fellow rookies like MAMAMOO and Michelle Lee, and this track isn’t enough to mark Shannon as an exceptional singer among such impressive competition. 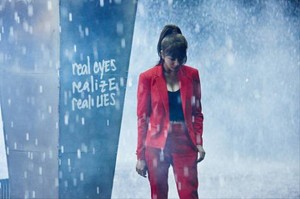 The storyline of the MV is frustratingly vague, leaving many questions unanswered. Why does she spend so much time singing in an empty car? Who kicked her out of the car and forced her to sit in the rain? What kind of graffiti artist chooses cliched phrases like “real eyes realize real lies” to write on public property? How does Shannon manage to stay dry while dancing in a downpour? However, chances are that most people won’t even pay attention long enough to notice that so much is left unexplained.

Although the song is called “Daybreak Rain,” the video doesn’t appear to take place during daybreak. The darkness is likely supposed to add to the somber mood that Shannon unconvincingly displays while she sings. Without any explanation of what made her so upset, though, there is no reason to believe in or care about her sadness. There are a few shots of her smiling, but because their is no context for her sudden happiness, these scenes just add to the confusion. 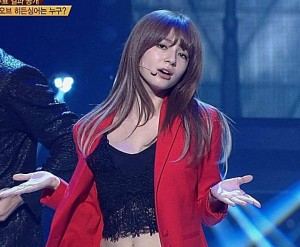 The dance is the most interesting part of the video — and Shannon does well considering that she has always been marketed as a singer. Her sophisticated look is a departure from the sweet, childlike image she’s had in the past. The end of the MV features shots of her dancing while soaked with rain and, while these scenes lack the bright pop of color provided by her fabulous red suit, they contribute a maturity that the rest of the video lacks. Sadly, despite these short glimpses of potential, the MV as a whole seems amateurish and unoriginal.

“Daybreak Rain” is not bad, just bland. Shannon has talent, but this debut isn’t unique enough to make her stand out. If she and Dap Sound can tough it out past these rocky rookie days and come back with a song that commands attention, there’s no reason why she couldn’t make a place for herself beside other talented ladies of K-pop. Hopefully her lackluster debut serves as a short daybreak to a brighter career.