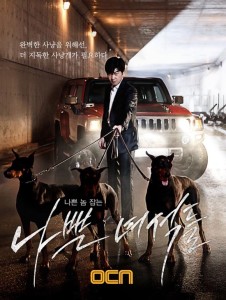 Want something a bit deeper than your average K-drama? Do you want action, crime, mystery and intrigue? At the risk of sounding like an infomercial host, have I got the drama for you!

OCN’s Bad Guys recently finished its run of 11 episodes to become what I think is one of the best dramas of 2014. Filled with a complex plot, superb acting and fantastic cinematography, this drama almost feels like a movie blockbuster. You won’t be able to take your eyes off the screen.

The plot will throw you around, make you sit on the edge of your seat and leave you gasping in shock. There is a clear attention to detail, with every new direction used to manipulate the feelings of the viewer. The first few episodes are designed to suck you in, introducing an unlikely team of criminal investigators. The team is made up of investigator Yoo Mi-young, ex-cop Oh Gu-tak, gangster Park Woong-chul, hit man Jung Tae-su and convicted psychopath Lee Jung-moon. This character combination is too good to pass up, with kick-ass characters becoming the immediate focus.

As the team starts to pursue more cases, the viewer gets an insight into the ‘human’ sides of these criminals. For the first time in their lives, these characters are saving people not killing them. The aim is to give the viewer hope that these characters can become ‘good.’ With the possibility of Jung-moon not actually committing the crimes he was convicted for, Tae-su’s desperate attempts to save the wife of a man he once killed and Woong-chul’s willingness to protect people, the lines between good and bad start to merge. While these beginning episodes are thrilling and invite you to like these characters, within the hype it is easy to forget the hints that there is something bigger afoot. 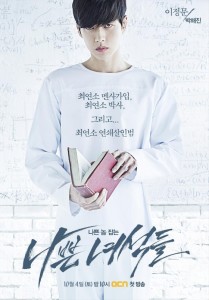 The connections between the characters start to make themselves clear, with them all having something to do with the events surrounding Oh Gu-tak’s daughter’s death. His daughter was the last victim in a series of murders performed by an unknown serial killer. Questions of who, how and why take the lead in this mystery, creating a chain reaction of twists and turns that will constantly leave you guessing. Never assume that you know what is happening because I can assure you, you do not. The minute you think you do, the carpet will get pulled out from underneath you. This build up to the final reveal creates enough tension that it doesn’t matter who the culprit is — you are bound to hate them. By this point you have been pulled around, witnessed the darkest depths of these characters and the lengths they are willing to go for ‘justice,’ that you will channel the hate these characters have towards this unknown perpetrator.

Every character is important to the plot of this drama; nobody is thrown in carelessly to for fill the aesthetic desires of the viewer — unlike most female characters in dramas. I had my doubts about the straight-laced female investigator, Yoo Mi-young (played by Kang Ye-won), who seemed more like a decoration than a part of the team at the start of the drama. She drove the team places, checked where the criminals were and gave them information; it was almost as if she was a robot. Her importance became apparent as the plot progressed with her morphing from the dog of the police commissioner to an independent operative. She is smart, almost too smart for her own good as she pieces together the small hints that the characters drop. Her intelligent character was refreshing in a drama defined by shows of brute strength. 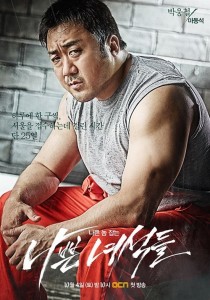 In no way is this drama meant to glorify the positions of a serial killer, hit man, gangster or even a cop. There is nothing amiable about a cop who loses his daughter and becomes more beast than human in the pursuit of her killer, an assassin that doesn’t understand loss, a gangster that talks with his fists more than his mouth and the supposed psychopath that loses the memories of murdering his victims. It is ironic that these characters pursue a form of justice, when they themselves did not care for it before with the exception of Oh Gu-tak and Yoo Mi-young. Each character has been twisted and broken down to have to get back up again. I guess if this drama were to have a moral, it would be that those things we love most have the ability to tear us apart.

The drama is laden with superb acting from the entire cast. No actor seems miscast at all, maybe because there are no idols in this drama. The writers and actors clearly put in a lot of effort into the creation of these characters, each action embodying who they are. Kim Sang-joong’s performance as the unpredictable Oh Gu-tak, who has been left hardened and vengeful by the death of his daughter, is spectacular. The stark difference between the man before his daughter’s death and the current man is harshly transparent. You would never expect the rough and murderous face of this character to be able to smile and make it believable, but Kim Sang-joong has that ability. This just makes it even more apparent how much the death of his daughter is weighted in every action that his character takes. His expressions go from impassive to angry to vengeful within seconds, all with purpose. So, where is his Oscar? I’d be willing to give him one. 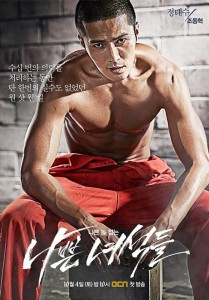 All this attention to detail in the plot and characters is backed by superb cinematography, giving way to some breathtaking shots and sequences. The action scenes are filmed with fluidity and care, creating a tightly woven, almost artistic, performance. The most impressive scene would be the showdown between Tae-su and a fellow assassin. The shift between close and far shots brings renewed interest to the fight away from the tediousness of violent confrontations. Far away shots are framed by surrounding buildings, pinpointing the focus on the two hit men, while close up shots follow the fluidity of the movement of the characters. The experimentation of the director during these scenes, using the environment, camera angles and lighting, is where this drama really flourishes.

This drama really thrives in the dark, with the director conserving the light to create a clear focus and mood for each scene. For instance, the small spotlight that enters the jail cell brings the focus to the practically uninhabitable room, enforcing the depth and despair that is found in these cells. Throughout the drama, the contrast between light and dark has created some breathtaking scenes from the darkened streets, warehouses and even just night scenes. The attention to detail and the dedication to the artistry of film making on the part of the director and crew put the finishing touches on this unforgettable drama.

This is one drama you don’t want to miss; with 11 episodes, each one is as important and as well thought out as the next. When watching it, it is easy to get caught up in the intriguing plot and when finished, it is not easy to forget. With the final episode introducing the possibility of another serial killer on the loose, here’s to hoping for a season two.