VIXX Brings Their Showcase to NYC 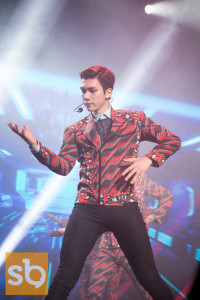 This past Sunday night VIXX came to New York for the first time and held a spectacular showcase that will remain in Starlights’ minds for a long time. Seoulbeats was there, photographing and filming the event as well as live-tweeting it, and if you didn’t catch our tweets (especially this fantastic photo of N), you missed out!

Terminal 5, a standing venue, had the potential for a bad concert experience, but thankfully that did not happen. The crowd was mostly under control with little pushing or shoving on the main floor. There were also two more levels that provided a better view of the stage, though it meant fans were farther away from VIXX.

Fans began lining up at 6am for the 7pm concert — true dedication — though the majority arrived late afternoon. The concert staff was a bit unorganized as there was poor communication between staff members on top of rehearsals running late. Communication has proven to be an issue with Limelight, as previously demonstrated by the ticket sale package fiasco. 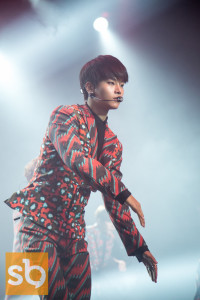 Of course, none of this was VIXX’s fault, and thankfully the show began no more than ten minutes late. And despite only flying in that morning, the boys were energetic and eager to perform for their adoring fans.

VIXX opened up with their latest single “Error,” and the crowd went wild! The energy was high, and Vixx was dynamic. From the photo pit, Seoulbeats was able to get a close-up view of VIXX, and the boys do NOT disappoint. They are even more beautiful in person and surprisingly tall. Even though I know VIXX has been praised for their height, it was another thing to actually see them in person.

In particular, Hyuk stood out not only in the beginning of the concert but throughout as well. The maknae of the group, Hyuk performed admirably and brought with him a manly charm that I didn’t know he possessed. It was only during the encore that his boyish personality came out as he wielded the GoPro camera often used for VixxTV. 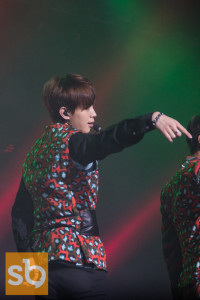 “Voodoo Doll” and “Secret Night” were also crowd favorites with “Secret Night” being a hit with its high energy. Part of the reason was due to Ravi‘s increased presence in the song, and he is extremely charismatic on stage. He clearly knows how to ramp up the party and consistently came to the edge of the stage during his parts, interacting with fans as much as possible.

The Q&A session gave VIXX a chance to rest and answer fan questions that had been collected before the show. Fan favorite, Leo, answered the first question because who can say no to a crowd emphatically chanting your name?

The relaxed atmosphere allowed the fans to watch the boys interact, and their playfulness with each other was endearing to watch. The two best moments of the Q&A session came from N and Hongbin. N disciplined the crowd for being too loud, and his sass made fans laugh; I truly hope a fancam captured that moment. 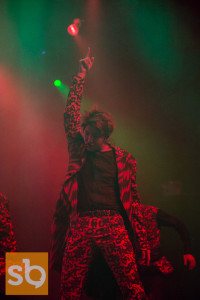 The other funny moment from the Q&A session occurred when VIXX asked fans where they should sight-see in NYC. Times Square was the clear choice until Hongbin asked, “How many say ‘my home’?” to which the crowd went wild. Hongbin shined during the Q&A portion of the event, even teasing Ravi in English over Ravi’s ideal type (hint: it’s you).

The showcase continued with more great selections from VIXX’s discography and fans especially loved “G.R.8.U” and “Beautiful Killer.” The boys were seemingly tireless, aside from wiping off their sweat, and their choreography was on point. And although N is the member touted for his dance skills, it was Leo whose dancing took the spotlight. The boy can move, and it’s hard not to get stuck staring at him even when he’s not singing. 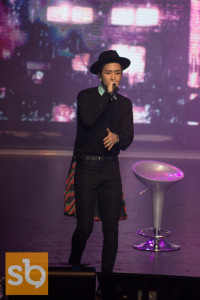 The most anticipated song, however, had to be the song that began VIXX’s rise to fame — “On and On” — and the boys tried their best to deliver. Unfortunately, the mic cut out during the most climactic part of Ravi’s rap. Ravi himself was visibly annoyed as were most fans. The mics were fine for the first half of the showcase, but during the second half they muted during important parts, most notably during the aforementioned incident and during some of Leo’s lines.

To try and compensate for this, the background music was increased, but it resulted in a messy performance. I don’t blame this on VIXX, but the sound crew should have done a better job. It is unfortunate this happened during prominent parts as VIXX was impressive live. I’ve followed the group since debut, and their live vocals have improved greatly over the years.

And although I love Leo’s high notes, Ken was hands down the best live singer out of the group. His vocals were stable and easily and clearly heard above the background music. Lately, it has seemed as if Ken has gotten less exposure due to the rise of Leo’s popularity, but their NYC showcase reminded me why he is one of the main vocals of VIXX. 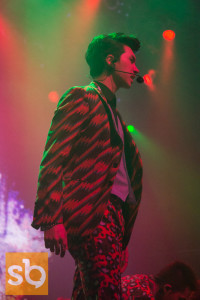 Although VIXX said their goodbyes after “On and On,” they returned for an encore and performed “Rock Ur Body” and “From Now On You’re Mine.” “Rock Ur Body” was a delight to watch because there was no strict choreography. Instead, the boys performed and had fun on stage, jumping around and providing fan service to both the lower and upper levels.

Even though the concert felt short at barely an hour and thirty minutes, Vixx performed a variety of songs from their discography and made the concert worthwhile. They are fantastic performers, especially Ravi and Leo. Ravi charismatically works the crowd, and Leo goes hard for every single song — there is none of his Ice Prince-ness on stage. Ken and Hongbin have great vocals live with Ken being the best singer of the night and Hongbin proving that his deep voice in “Error” was not the result of technological manipulation. Even Hyuk shined, bringing a maturity to the stage I didn’t know he had. And, of course, I can’t forget leader N who took charge of both Vixx and the crowd to make the night unforgettable!

Editor’s Note: Many of you have been anticipating our interview with VIXX (we were, too). Due to tight schedules with two performances in two different cities back to back and poor communication among the organizations in charge, our interview was unfortunately cancelled. But we did get great photos and videos, and we’ll be sharing the footage we captured along with the rest (and there are plenty) of the images on our Tumblr.

Enjoy the showcase? Participate in the Hi-Touch? Share your favorite moments from the concert below!