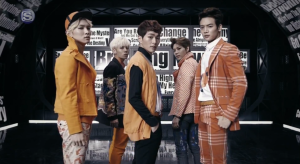 During their November 1st Hiroshima concert, Shinee members emotionally announced that they have been invited to hold a solo concert at Japan’s Tokyo Dome. SM Entertainment later confirmed that Shinee will perform at the prestigious Tokyo Dome on March 14th and 15th of 2015.

The Tokyo Dome concert is slated as a “Special Edition” continuation of their current SHINee World 2014 ~I’m Your Boy~ arena tour, with 30 performances taking place in Japan between September and December of 2014.

Alongside the announcement of the concert, it was also revealed that Shinee will release their 11th Japanese single on March 11th, 2015, three days before the Tokyo Dome concert is to take place.

These exciting announcements serve as an indication of Shinee’s continued focus on Japan. To date, Shinee has released 10 singles and held three arena tours since their Japanese debut three years ago under Universal Music Japan. Shinee has seen notable success in Japan. Their most recent Japanese album, I’m Your Boy, ranked number one on the Oricon Weekly Chart, making Shinee only the second Korean male group to secure the number one spot (the first being TVXQ).

While this is not Shinee’s first appearance at Tokyo Dome, it will mark their first solo concert at the venue. Performing in Tokyo Dome is a major milestone for any performer, as the 55,000 seat venue operates on an invite-only basis. It is exceptionally notable for foreign artists to be invited.

Shinee will be joining the short list of K-pop artists who have conducted solo concerts at the venue since Rain’s groundbreaking 2007 concert. Over the past few years artists like Big Bang, Super Junior, Kara, JYJ and TVXQ have made appearances.

Readers, how do you feel about Shinee’s upcoming Tokyo Dome concerts?