Got7 Face Ideals In "Stop Stop It" 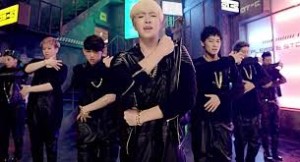 Got7 has had quite a debut year, making a splash with the cocky “Girls, Girls, Girls” and the more laid-back “A”. Now, they’re rounding out their first year with their first album, Identity, and the title track “Stop Stop It.” Unfortunately, compared to their previous releases, “Stop Stop It” is a bit of a letdown.

Like or hate Got7’s previous tracks, they made an impact. They were catchy, memorable songs that popped from the K-pop landscape. More importantly, “Girls, Girls, Girls” and “A” had personality. They defined Got7’s image as playful, a bit arrogant, but overall nice guys. “Stop Stop It” does not measure up to their previous songs because it has no personality.

“Stop Stop It” is an incredibly generic song. It’s so bland that it makes milk seem edgy. It lacks energy, exciting vocal opportunities, or really anything unique. The Got7 members do their best on the delivery, but this song is so blah that it’s beyond saving. The music is generic, and the lyrics are the typical, entitled nonsense about the friendzone and how their “friend” should give them a romantic chance. The only thing unique about it is the god-awful atonal autotune effects, like it’s still 2008. I have a hard time believing that this is the best song on Identity when everything about it screams “album filler”.

That said, while the song is blander than dry toast, the MV is one of my favorites in a while. It continues the grand tradition of Got7’s 5 minute videos. It opens with JB prancing around on a rooftop ledge; A girl comes out from the building, he confesses that he likes her, wants to date her, and if she doesn’t reciprocate he’ll jump, et cetera. She is not impressed by JB’s blustering and does what most girls would do: rolls her eyes and heads away from the idiot. When the door opens again, JB sees his doppelganger and gets so startled that he falls off the ledge. . . 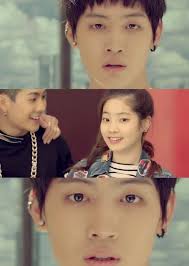 . . .and straight into a parallel universe. Whereas the old world was gray and dingy, this new one is bright — almost supernaturally so — and filled with vivid colors and patterns. JB is flummoxed enough, but then the same girl comes in and heads straight for JB, because in this world she’s his girlfriend.

Throughout the MV, we see the young couple cuddling. Unlike the opener, where she was unimpressed and had an epic ice-queen face, in the alternate world she’s a typical ideal girl. Cuddly, bright clothes, and never seen without a face-splitting grin.

Yet JB is not happy with this. He realizes that this girl may have the same face as his crush, but she’s not the same girl. This happy, bubbly girl is lovely, but she’s not her. Driven by this realization, he heads to the roof where the whole shebang began. When he ends up back in reality, he’s right where he started — getting ready to talk to his crush.

“Stop Stop It” can be taken in two different ways, and both of them are extremely refreshing to see, especially in the K-pop industry. Option one is that JB learned that pursuing a relationship with someone who is willing to change themselves for you isn’t worth it. A girl who starts off tough and icy, but turns into a bubbly ball of sugar upon getting into a relationship isn’t being honest.

Now sure, she could put up a cold front while actually being a nice person inside, but it’s just as plausible that she is a bitch who’s putting up a girly front because that’s what she’s supposed to do. You can’t trust that the side of themselves they show you is really them, and if not, then you’re dating a facade. Everything that you think you know about them might well be a lie. Or it might not. Either way, dating someone who has no facades is usually easier on the heart.

The other way to take “Stop Stop It” is a lashing out at the idea of “The Ideal Girl”. In the real world, JB’s crush is cold, distant, and sarcastic — the patently obvious opposite of an ideal Korean girl. Yet JB still likes her like this, even though she doesn’t feel the same.

When he falls into the parallel universe he has her, but not really. She’s sweet, she’s bright, she’s shiny. And she’s not the girl JB fell for. This is what he’s supposed to like, but he doesn’t. He’d rather date a girl with some edge, and when he realizes that, he gets another chance at the girl he really wants. She might not be to everyone’s taste, but hey, the heart wants what the heart wants, and there is nothing wrong if that want is a bit atypical.

“Stop Stop It” was a bad choice for the title track of Got7’s first album as a song, but the MV makes up for that in spades. One can only hope that Identity as an album is strong enough to make up for its title tracks failing.