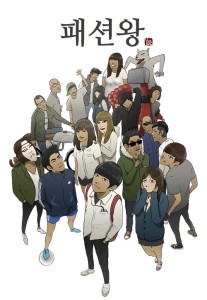 Being the first film ever to be adapted from a Naver webtoon, and not to mention a majorly successful series that hit a record of 4 million views, Fashion King cannot avoid being subjected to heavy expectations from the comic’s fans.

For the original webtoon version of this story, the author Kian84 is said to have “captured [Korean] teen-culture with wit and satire” with a matching sketchy drawing style. The characters may appear in over-the-top appearances and behaviors, but they are also realistic enough so that teenagers can relate to. Missing these appeals, the film is considered incapable of doing justice to Kian84’s work.

In all honestly, the product is not a bad representation of Kian84’s original work, as some reviewers have pointed out. The cause for a mixed reception of this film perhaps has more to do with fundamental differences between two modes of representation than with how bad of a director and writer Oh Ki-hwan and Yoon In-wan have been.

For those who have not read the original series, Fashion King is an acceptable choice for a leisure activity over the weekend. If you strictly watch the film with only a mindset of seeking entertainment and do not expect too much, then this 114-minute product is quite enjoyable indeed.

The film does not have an outstanding plot, but at least the story line makes sense with no big illogical absurdities. High school “loser” Woo Ki-myung (Joo Won) is a usual target for bullying in his class. However, one day he discovers the breath-taking and powerful realm of fashion, where he learns to become someone with 간지 (kanji) — awesomeness, or coolness. Developing a crush on the prettiest girl in school, he enters into a competition with the prince-like Kim Won-ho (Ahn Jae-hyun). He then wins the Fashion King title, finds true love, and attains true confidence.

This is a very cliche narrative, but a profound plot is not the focus of director Oh. In fact, for Fashion King, the story should be simple enough so that the cast, the humor and the visual effects can have more room to shine. 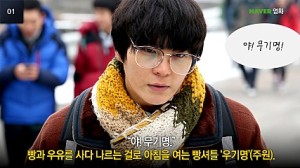 Joo Won, as always, proves his top-class acting skill. Fashion King tells a story about a boy growing into a man. In the beginning of Woo Ki-myung’s adventure, he is such a pitiful kid. Joo Won’s acting is definitely convincing when rendering this feeble nerdy kid who suffers from fellow classmates’ daily attacks and contempt. Everything about him reveals an unhappy, but accepting attitude for someone whose mere wish is to pass a day without troubles (which of course hardly realizes).

Later on, when Ki-myung embarks on the path of kanji, we see a teen boy chasing after his goal wholeheartedly with that innocent dedication youngsters tend to embrace. It is also hilarious watching a man-in-the-making Joo Won doing those weird exercises under the supervision of his quirky mentor – underground fashion designer Nam Ki-jong (Kim Sung-oh). Toward the end of the film, our male protagonist struggles with his past, but he chooses to not run away and finally succeeds in the last catwalk challenge. Besides the pure hotness by the name of Joo Won, the audience can clearly see how that awkward boy back then has matured through his long certain strides on the runway.

Over the course of this transformation, there are enough transitions so that audience do not feel like they are watching three different characters. However, this persistent portrayal of Woo Ki-myung is at the same time a downside. Until the end, Joo Won stays as a goody-two-shoe guy with no “flaw” in his character. He loves his mom, he is loyal to his friends, and being a victim himself once he never tolerates bullying. He does not harbor any negative characteristics. Somebody may find this one-dimensional figure pretty boring. 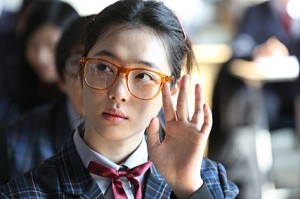 For the more amateur role-takers, Sulli and Ahn Jae-hyun are not too bad themselves. Sulli carries out quite nicely the task of being a cute lively female side-kick. Once again Korean entertainment products just have to stick with the stereotype that a nerdy girl is destined to be ugly (and messy). Nonetheless, at least Sulli looks adorable with that girl-next-door, geeky appearance. For Ahn Jae-hyun, it would be way too harsh to call his acting a failure. For his character Won-ho, Ahn fulfills pretty much all the basic features: acting cool, being an arrogant bastard, and being a model.

Despite a good cast and an easy-to-follow plot, one criticism for the film is that it tries to jam in way too many things. It seems to be making a social statement about high school bullying at first. Then it is full-on comical in the middle. Toward the end, it turns into a heartbreaking drama when the director suddenly includes a very emotional scene of Woo Ki-myung’s mother crying with realistic hand-held camera shots. Too many elements like this can a bit overwhelming.

Now onto the reasons why netizens are so not satisfied with the cinema version. The very factor to be considered here is the target audience of each genre. Webtoons are specifically aimed at young netizens, who would just read on their smartphone instead of properly enjoying every page in front of a larger desktop or TV screen. Each chapter in the series will be consumed within perhaps 10 minutes of these people’s daily commute. Meanwhile. films like Fashion King strive for a larger audience base not only within Korean society, but also globally. Instead of trying to generate something hyper-artistic or meaningful, it is a commercial film at best. 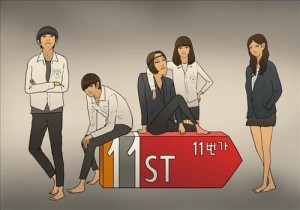 A characteristic of webtoons, as we have discussed here on Seoulbeats once, is that series belong to this genre “are so invested in character development that outer beauty is rendered needless”. Unlike manga, glamorous and polished drawing is really not what webtoons are about. It tends to minimize the visual representations and focuses more on developing the “psychological depth” of the character. Webtoons like Fashion King can even have no clear plot line that connects the whole series, it can just consist of small little stories that together create a very certain atmosphere.

In a sense, director Oh has sacrified the character’s depth to emphasize more on the surface representation. It is understandble if the aspect where the film stays the most loyal to the fans is the construction of the characters’ physical appearace. A weird-looking cast is easy as well as it is catchy. In this aspect, the film is so accurate to the point that the characters seem to be walking into real life straight out of the webtoon, with all the details about their ridiculous or “awesome” styles.

On the other hand, the cinema adaptation has even outdone the original when it comes to impressive fashion showcasing. Accompanied by enticing background music, lighting, runway stages, the beautiful setting of Dongdaemun Design Plaza, and above all Joo Won and Ahn Jae-hyun’s very intersting outfits, Fashion King is indeed a satisfactory showtime.

The biggest lost for the film compared to the webtoon is perhaps the very sensation every Korean boy can understand and relate to. Scene by scene, the original work has deftly captured a generation’s emotions and lifestyle through various pop culture and sub-culture references and jargon. For example the one scene about Ki-myung that every kid would be able to immediately tell it is about the real-life Jang Geun-seok, or designer Nam is a direct mentioning of Bae Jung-Nam — a well-known underground fashionista among teenagers and an Internet celebrity. All in all, this series resembles a scrapbook that puts together pieces about the life of any average Korean teenage boy in the 2000s.

For many Korean netizens, such a sense of familiarity is no longer present in the film. In order to reach out for a larger group of audience, it is inevitable for the director to compromise elements that only teenagers would understand and go for something more common. Even though the film itself is not a bad production, it is missing out perhaps the most important element that creates this series’ fame from the first place — a connection, a sympathy, and a voice that represents so well how young Koreans of the early 21st century have lived their everyday life.