Dabit Makes a Sad Comeback with "Zone Out" 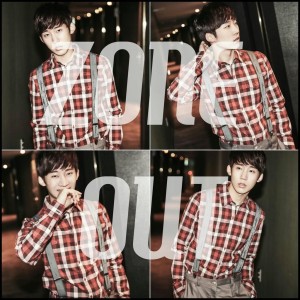 It’s been almost a year since Dabit debuted and released a song. But, he has finally made his return. While his debut “Whoo Whoo Whoo” was a jazzy, upbeat number, his follow-up is in a different direction. “Zone Out” is an emotional and sorrowful ballad about a break up.

Given his previous release, it’s not terribly surprising Dabit goes for the more classic feel for the song. “Zone Out” really is minimalist in its approach. The simple piano backing his vocals is fantastic. While there is a light electric guitar being picked in the back, as well as momentary drums, the music is really stripped bare. The song has the feel of a live, intimate performance and his actual live performance sounds just as good as the recording.

The simple manner in which the song is produced matches well with the MV; it features just Dabit in various scenes. It’s shot in both black-and-white and color, although the color portion is only temporary and small. There are no fancy sets, dancing, or even overly-dramatic acting. While there are plenty of still shots of Dabit singing and of the beautiful coast, the MV for “Zone Out” is actually about taking a journey.

In the opening sequence, Dabit is shown lounging on the couch, ignoring a phone call. Given that the song is about a breakup, it can be presumed that the caller is his ex. Or, it can be thought that Dabit is in such an emotional state that he is ignoring everyone. Either way, he’s not in the condition to communicate with the outside world.

Following a brief title sequence, we begin to see the journey Dabit is taking. First, he wakes up and, once again, tries to ignore the world. When the realization hits that he’s single again, he fights back the tears and hides under the covers. 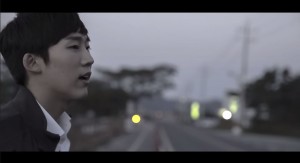 Eventually, he takes a trip to the coast. It appears to be a last minute decision as he’s forced to hitchhike once off the train. Or at least try to hitchhike, because it seems he’s failing miserably from his exasperated expressions.

It’s during his time on the beach that the color comes back to the MV. Why now? Well, I’m not exactly sure. Perhaps it’s a small sign of moving on – or at least deluding himself into thinking he’s gaining clarity.

The darkness returns when he goes to what appears to be a nice hotel. What better way to recuperate after a breakup than a hotel suite? The MV does drift into clichéd MV sadness during the ending scenes. At one point, Dabit is fully dressed in a bathtub; for no reason, of course. However, instead of being wet or weeping, he’s writing. Writing serves as a catharsis and it’s this moment that the dam holding back emotions bursts. It’s this cathartic action that ushers back in the black-and-white.

At the end of the MV, we see Dabit finally break down completely. He gets angry and throws his precious journal around, and of course no breakdown is complete without some ugly crying. Unlike quite a lot of MVs, the crying actually looks realistic; the gasping and shaking while trying to hold back all the emotions that you’ve been bottling up. Dabit actually shows decent acting skills that make the emotions believable. 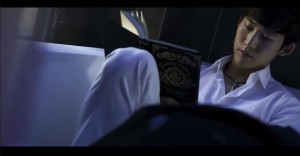 I suggest watching the MV without sound at least once. You are able to get a better vision of the emotional progress a person makes after a break up — trying to avoid and distract from the truth, then no longer being able to escape the sadness.

Dabit has distinct vocals, which put him in the category of other great male vocalists such as Roy Kim and Wheesung. His voice also means he does an impeccable cover of Yoo Seung Woo. This is why he’s someone that people should pay attention to. “Zone Out” perfectly showcases his uniqueness and allows Dabit to show he has simplicity and sensitivity when it comes to his songwriting and performance. Thankfully, his efforts end in a pretty outstanding ballad.