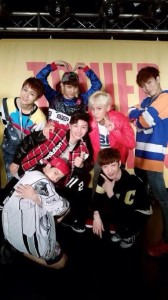 BtoB has had their work cut out for them, this past week being filled with promotional events for their debut Japanese album.

Their first Japanese single is “Wow”, which is a Japanese-language remake of their 2012 Korean song. The group dropped their single at a press conference on November 11th in Shibuya, Tokyo, at Tower Records.

And it turns out that BtoB has its fair share of popularity in the country, taking the number 1 spot on Tower Records’s daily single chart. They also topped the charts for preorder reservations the day before the album was released. BtoB not only killed in the physical charts, but all three packages of the single took the top three spots on the online chart as well.

On November 12th, the group formally debuted in front of fans at the Toyusu Pit, performing an official debut showcase. It looks like this is but one of many for BtoB, with more showcases and hi-touch events planned for cities like Nagoya and Osaka.

The full PV itself for “Wow” was released on the 8th, and for their first Japanese song the boys were quite impressive. Ilhoon even opted for a real Japanese rap intead of repeating a Korean one (as so many Korean artists tend to do when first debuting in the country).

Check out the full PV and let us know what you think about BtoB’s Japanese debut!