Boys Republic has returned with their third single of the year, “The Real One,” successfully completing their 2014 Fantasy Trilogy. “The Real One” follows February’s “Video Game” and July’s “Dress Up” with a new “battle of the eras” concept: 1920s Boys Republic versus 2014 Boys Republic. Despite gaining ground in Malaysia, Indonesia, Thailand, and the Philippines, Boys Republic has yet to make a significant dent in the Korean music industry. Will this be the song to do it?

The “battle of the eras” music video begins in — what else — black and white, with film noise to add to the 1920’s feel. The members stand in shadow boxes as works of art: walking, cane-toting, top hat-wearing, dandied up works of art from Jay Gatsby’s era. Their 2014 counterparts enter, and the twinkling piano and strings intro gives way to the start of the song. This is a dance-off between the times, with both teams doing identical choreography. Aside from a few face shots to satisfy stans and .gif makers, the focus here is primarily on the “mirrored” choreography. Since the members and their alternate selves do the same choreography, they move in opposite directions. It’s a bit jarring if you ask me, especially if a mirror image effect was the intended result, but it seems to be an intentional choice on the director’s part. The transitions between modern-day Boys Republic and classic Boys Republic are seamless, making the video more than a simple dance-off. The choreography itself is decent, with a nice number of smaller hand-focused moves, though the crotch grabs and the naenae seem almost anachronistic given the music video’s setting. 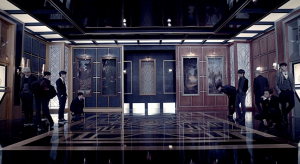 The music video is ultimately a boxed music video. It’s fashioned as an actual building lobby, but a box is a box is a box. Boxed music videos often fall flat because they’re poorly utilized, with members occupying a small fraction of the box and doing little else than dancing. The boxes are flashy for flashiness’ sake—colorful, but rarely adding to the greater concept. This box, however, completes the concept, with its gold accents and deep shadow boxes, and the members fill it well. (Props to whomever designed it.) In addition, the camerawork is solid, and the washed-out colors add to the understated/classic concept.

The song is a great hip-hop influenced single centered around a girl who is The Real One. (No, the song title wasn’t a ploy for you to figure out which team was the real Boys Republic and which team was composed of well-designed androids.) “The Real One” is catchy without being obnoxiously repetitive, though I doubt the constant “jjarajjanjan” will leave my head anytime soon. The song’s tempo is slower than some current K-pop songs, but it has the perfect tempo for a song that aims for swagger. The song moves with a consistent sound, save for the trumpet blares during the song’s final bridge complementing Minsu’s rap. Onejunn especially shines with his smooth, fitting vocals. Musically speaking, “The Real One” is on par with “Video Game” and far ahead of inconsistent “Dress Up” and outdated “Party Rock.” 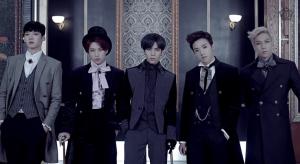 Boys Republic went from an 8-bit influenced song in “Video Game” to a a more traditional pop sound with a boys-next-door-in-pastel image for “Dress Up.” Visually speaking, their wardrobes for “Video Game” and “Dress Up” resembled B1A4’s and SHINee’s leftovers. Their styles for “The Real One,” both old-fashioned and modern, suit them well and feel original in an industry full of duplicates. Though this change in sound and image may come across as a last-ditch attempt at relevance, Universal Music Korea and Happy Face Entertainment made a wise choice in planning out future concepts and packaging them as the Fantasy Trilogy, a trio of singles designed to show various concepts. Future changes are still up in the air, but if they continue to go in this direction, I’d be delighted.

Boys Republic’s “The Real One” shows growth and maturation without resorting to heavy lyrics or dreary concepts. This feels like the real deal for them, both musically and visually.