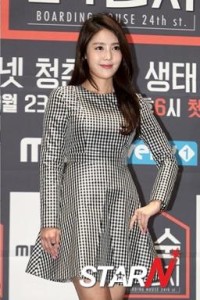 And now for some good news!

It was only about three weeks ago that Super Junior member Sungmin‘s relationship with musical actress and The Three Musketeers co-star Kim Sa-eun had been revealed, so fans were naturally surprised to hear news that the couple were to tie the knot.

A representative from Sungmin’s side is credited with breaking the news, claiming that the couple would be wed on the 13th of December in a private ceremony. This news, however, was refuted by Kim Sa-eun’s agency; the conflicting reports gave pause to celebration and mourning, as fans waited for SM Entertainment to, as seemed likely at the time, refute the news.

But now, Sungmin himself has confirmed the original story, right down to the date. Writing on his personal blog — which was also posted to Super Junior’s official site — Sungmin expressed his regret over not being able to tell fans of his decision himself, and asked for their understanding and well wishes.

He also talked about his anxiety over revealing this news, and thanked both his fellow Super Junior members and his agency for their support. SM also made their support publicly known, tweeting a sweet congratulatory message to “Sungmin-ah~”.

While this may not have been the way Sungmin and Kim Sa-eun wanted to reveal their marriage, at the end of the day good news is still good news. Congratulations to the couple, and may they have a long and happy married life!