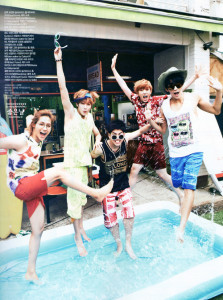 Debuting in 2011, B1A4 has slowly but surely built up a loyal fanbase over the years with catchy songs and funny music videos. They’ve even managed to become somewhat known as artists for their involvement in their latest mini album, Solo Day, having written and produced all the songs themselves.

On top of these accomplishments, the boys exude an innocent charm, emphasized by their philanthropy and naive, countryside image.

However, hidden in the lyrics of some of their songs, B1A4 show hints of straying from their virtuous persona. Although in real life the boys are sweet goofballs, re-imagining them as bad boyfriends isn’t too hard with lyrics such as these.

B1A4 turn into jealous and controlling boyfriends in “So Fine.” The lyrics are peppered with admiration for the girlfriend which is quickly contradicted by the boyfriend’s distaste for the girl’s outfits.

Today, you look even prettier
Short skirts and thick makeup –
Of course pretty things are good but
Other guys looking at you bothers me
Please only show me baby

The reason why this song puts B1A4 in the “bad boy” category is because their insecurities manifest as possessiveness and unfairly ask the girl to stop dressing how she wants. Nowhere in the song does the girl give the man any indication of being a flirt or cheating, but the man cannot stand that his girl looks good to others. Telling her to change her behavior is not a sign of a good guy.

In “Baby Goodnight,” B1A4 transform into the stereotypical bad boy player by going out behind their girl’s back. They put on flashy clothes and dance the night away with not a single thought of their sleeping girlfriend. And although they admit that what they’re doing makes them bad, they still claim that they should be able to do so every once in a while.

Thoughts of missing you are out the door today as well
But today I am a busy body, I’m a bad boy
I’m allowed to play like this sometimes
Because I can go to you tomorrow (sorry)

Normally, I’d agree. After all, no one has to be with their partner every single second of the day. However, the tone of the lyrics takes a much more flippant, “whatever, she’ll forgive me anyways” kind of attitude that suggests that maybe the singer doesn’t care about his significant other as much as he claims to.

Of course, you never know what you have until it’s gone and B1A4 experience that in “Yesterday.” While the overall theme of the song is regretting your actions and realizing you’ve taken your partner for granted, the boys admit that they were not that great of a boyfriend to begin with.

I complained like always as if it’s a habit

I was late to our meeting time like always

On your two pretty eyes, your two white cheeks
the tears that flow on them, I’m becoming used to them
…
Even if I try to talk kindly
Even if I try to not be late in replying back
Oh it isn’t as easy as I thought

The alarming part isn’t the complaining or being late — plenty of people have those faults — but instead the indifference the boy has to the girl’s tears. It implies that this has happened many times before and, taken in context with his bad habits, that it is often due to his actions.

The one song in which B1A4 truly believe that they are bad — “Good Love” — is the song in which they come across as good guys. They lament that they are bad boys for making their girl cry when the context of the lyrics tells a different story. Yes, their ex/girlfriend is crying, but they also explain that love comes and goes and that sometimes people just fall out of love. This conveys a sense of drifting apart rather than direct conflict between the two parties, unlike some of the previous songs.

Despite the lyrics of the selected songs above, B1A4 have a clean, wholesome image that plays up their sweet charm. These songs represent only a fraction of their overall discography and listening to most their music, B1A4 are indeed loveable idols. But no one is perfect all the time and sometimes it is interesting to delve into the imperfections of said idols. Whether it’s being a bad boyfriend or being a player, B1A4’s short stints as bad boys hopefully doesn’t persist past their lyrics.