With Jessica officially ousted from Girls’ Generation, the impenetrable sisterhood lies at the brink of crumbling down, holding a reminiscent of their past glory in their legendary music videos. One such MV is “Gee.” So in this installation of K-pop Throwback, it’s worth our time to reflect on the good ol’ days of sugary sweet aegyo, sisterhoods, national girl groups, and Girls’ Generation.

“Gee” is one of the most uncomplicated K-pop MVs of all time, be it in terms of musical composition, cinematography or choreography. However, it still has over 120 million views on Youtube, the record of nine consecutive wins on KBS Music Bank, and is one of the few music videos that even non K-poppers are aware of. The song came just after DBSK’s “Mirotic” and the Wonder Girls’ “Nobody”, and it was released in the same year as Super Junior’s “Sorry Sorry.” But something about “Gee” worked magically and exclusively. It became a model for later girl groups; however, none of them were able to generate the same wave of finesse, cuteness and success.

During my early K-pop days, I remember coming across “Gee” after having watched “Bad Girl,” and I (almost) went into a crisis. I could not reconcile myself with the fact that the biker girls I had ooh-ed and aah-ed over only minutes ago were actually neon-loving, bbuing-bbuing obsessed infants. I was that traumatized and betrayed by the change.

Musically, “Gee” signifies the importance of a hook in K-pop. The hook is very easy to hum, thanks to its monotony and single alphabet appeal “G.” The hook also advertises the band (and brand) name – Girls’ Generation (GG). Therefore, even when Jessica says “GG” in “The Boys” we are simultaneously reminded of two things – the band and the iconic song.

There has been considerable debate on the concept of “Gee.” For some, the trope of the mannequin plays right into the hands of male fantasies while others feel that the lack of a definite male figure actually supports female subjectivity. I was of the former opinion at first but soon changed my mind when I realized what the song was all about: fun.

“Gee” is literally about Girls’ Generation having fun. Of course, they’re talking about that insignificant “Employer of the Month” Minho, but that too is part of the fun. If you think the girls are taking Minho seriously while happily vandalizing the whole store, then I’m judging your comprehension skills extra hard.

The choreography is nothing compared to the complicated choreography of “The Boys” or even “Genie.” I have two left feet, and even I can perform decently to the chorus. It’s way too simple to cover compared to “Sorry Sorry,” which just adds to its accessibility. Most importantly, whether you dance or sing to it, or just plain listen to it, you cannot help but feel chirpy. I haven’t forgotten the love-hate relationship a lot of fans share with the song. You’re definitely not showing this to a potential K-pop convert, over something as polished as Exo‘s “Growl,” but at the same time, you cannot deny that it’s one of the songs that defines K-pop as a genre. 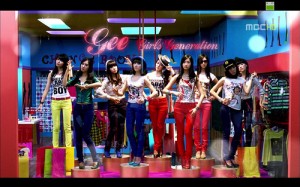 Two interesting ideas presented in the MV are that of the Girls’ Generation sisterhood and of the quintessential Nation’s Girl Group. The sisterhood aspect is pretty evident with the girls playing around together. A key scene would be the last part of the music when Tiffany realizes that they’re not mannequins anymore, and taps on the girls’ shoulders literally awakening them to their freedom. The Nation’s Girl Group line of thought also emerges from this argument but in addition, it panders towards the ideals of ‘virginity’ and ‘purity.’ If you’re representing South Korea internationally, you need to accept the lady-whore dichotomy and educate yourselves in fitting into the former.

“Gee” encompassed that. Nine girls giggling over a random guy, with not even the slightest sense of an awakened sexuality, aggressively asserts purity. To make matters clear, they put in the random scene of the girls in white, against a white background, sitting close to each other sans heavy makeup or crazy hair colours. They don’t look like superstars; they look and feel like the girls next door. Also, they don’t indulge in lace dresses, peach skirts, or pink sets, which is why I don’t buy the infantile argument when it comes to “Gee.”

The song’s phenomenal success can also be affirmed by the number of times it has been parodied by fellow K-pop artists. This is interesting because, of course, they’ve been parodied by boy groups. These male performers had no costumes to rely on and, hence, had to base their parodies on their exaggerated body gestures and facial expressions. Even then it never felt as funny as Shindong parodying “Troublemaker” simply because “Gee” doesn’t allow much space for comic exaggeration. In many ways, the MV is untouchable and difficult to tamper with.

“Into the New World” was haphazard in terms of portraying a solid image for Girls’ Generation. “Kissing You” was too forgettable. But then came “Gee” and it became the game-changer for Girls’ Generation, and K-pop in general. Jessica may be a former member of the group now, but she loses nothing because she will continue to be an irreplaceable part of Girls’ Generation’s golden era that started with “Gee.”