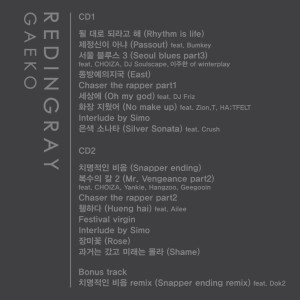 So, we have one-half of Dynamic Duo making his solo debut on the 16th. No prizes for guessing which half.

With Sulli completely disappearing from the entertainment world, it seemed natural that Choiza wouldn’t be able to carry out much activities either since their scandal is still hanging over their heads. Thus, it seemed natural that Gaeko would be handling things on his own for a while. And it was merely a matter of time before he released a solo album. I mean, there’s really no better time than now, with one of the Duo put on hold.

His album title is REDINGRAY (with a released tracklist), representing his red passion alive in a gray city. And although Choiza won’t be able to promote with him, his teammate will be featuring on this album. Along with Choiza, Bumkey, Zion.T, HA:TFELT, Crush, Ailee and Dok2 will all be making appearances on his first solo full-length album. A rather illustrious group of names for his debut.

It’s said that this upcoming album will contain a lot of Gaeko’s own inspirations and stories, which is significantly different from the Gaeko of Dynamic Duo. Whatever that means, we’ll see what he has in store for us on the 16th.

Are you looking forward to Gaeko’s debut?