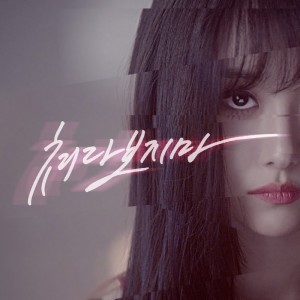 Over the last three years, Song Ji-eun has made a reputation as a strong solo singer with daring choices in symbolism in her music videos. The main vocalist of Secret isn’t afraid to push the envelope, showcasing themes of crucifixion and murder in her past works. With latest single “Don’t Look at Me Like That,” Ji-eun stays in full form, keeping the dark, somber themes in her visuals.

But before we dive in, it’s useful to also consider what TS Entertainment teased us with before the single dropped.

In an exclusive tip to Dispatch, the company hinted that “Don’t Look at Me Like That” would explore love not often criticized by society, including homosexual and interracial couples, as well as a relationship featuring an older woman with a younger man. The lyrics were to be “shocking” and different from Ji-eun’s past songs, and Bang Young-guk, who featured on her first single “Going Crazy” as a trainee, would feature on the track.

To this, I scratched my head, but due to interest, I went with it. High hopes right? Now, onto the video.

Did I miss something?

Given that the video did not deliver on the promises made, TS Entertainment’s media play was a bit of a letdown, but I suspect that they ended up scrapping whatever was originally planned for the video. I can get a sense of where the rap could have fit in well, and the lyrics did seem to be consistent with the theme of love defying the expectations of society, with lines such as:

Don’t look at me like thatWe’re just in love, that’s allDon’t hate on us, however you’re viewing usWe’re just a little differentJust leave us alone

Even with the lyrical-visual disconnect, what did end up in the song and video is good. I like that Ji-eun takes an adventurous route in her music videos, committing to the visuals just enough that it doesn’t feel half-done. The video for “Don’t Look at Me Like That” offers some themes that she’s partially shown before, but delivered in a different medium. 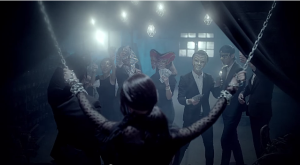 The video opens with Ji-eun, bound in metal chains, being led through a gloomy industrial basement by a man in a masquerade mask. In front of a crowd of masked spectators, the man presents Ji-eun as an auction piece on a stage. The presentation throws the crowd into a frenzy, whipping out stacks of money to purchase Ji-eun.

Eventually, the masked man yanks her into the crowd, where other masked men and women touch her, clearly trying to assess her value to them. As Ji-eun gets more and more uncomfortable, a fire suddenly breaks out in the auction room, apparently caused by Ji-eun herself.

At the video’s end she stands in a different dress, this one red instead of the Victorian-style black dress she wore at the auction. The chains are still tied to her wrists but her captor and the potential buyers are all strewn across the floor after presumably suffocating in the fire.

Since she’s depicted alone, it’s difficult to make a direct connection to the types of relationships mentioned in the news bite. Nonetheless, there’s a fair amount of interesting commentary in the video that is certainly culturally relevant. In light of all of the scandals to plague K-pop as of late relating to idols, dating, working conditions, and violations of human rights, it’s easy to extract this type of symbolism in Ji-eun’s video. 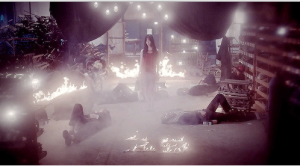 While “Don’t Look at Me Like That” as a song focuses on equality in love, “Don’t Look at Me Like That” as a video focuses on equality in personhood. What happens to Song Ji-eun in the video is basically an homage to human trafficking and slave auctions, and the shots of greedy hands pawing over her as if she isn’t human are hard to ignore, especially once one considers that she is a woman being placed in this circumstance in which her body is a commodity to be sold.

Ji-eun gives a wonderful vocal performance here as well. Her smooth voice suits slow-tempo ballads very well, and there’s a fair amount of vocal variation in “Don’t Look at Me Like That,” allowing her moments to belt powerfully on the chorus and to pull back for softer lines on most of the verses. 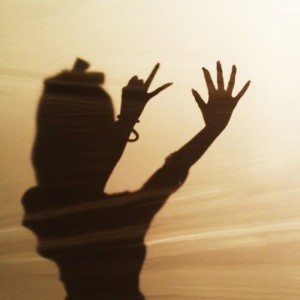 Although the song is fine as is, I do find myself wanting to hear a rap towards the bridge, just to bring in some variation and break apart the repetitions of the chorus. The song isn’t really hurting for it, but the backtrack lends itself well to a rap feature, signaling that maybe one was planned and later removed if the rumors were true.

I’m torn on whether I would have liked to see the rumored video plans come to fruition with Ji-eun’s latest comeback. Compared to her past efforts, “Don’t Look at Me Like That” is surprisingly safe for her, considering “Going Crazy” and “False Hope” have some shocking and controversial themes. This video is good, but perhaps a little under the standard of Song Ji-eun’s usual material.

As a counterpoint, if the mentioned couples were included, would the video veer on the line of exploitation without any meaningful content or commentary? It’s hard to say without knowing the full picture of what could have been. The lyrics definitely would’ve been spot on for such a concept.

Nonetheless, she adds another solid song to her résumé, and continues to craft her own identity outside of her group. With the mysterious “25” in flames at the end of the video and Ji-eun’s recent Instagram post about a new project related to the number 25 (also her age), maybe “Don’t Look at Me Like That” isn’t the last of Ji-eun as a solo act this year.