BtoB Makes Comedic Comeback With "You're So Fly"

Following the humorous MV “Beep Beep” from earlier this year, BtoB make their comeback with another laugh-inducing MV in tow titled “You’re So Fly.”

On the surface, “You’re So Fly” is just a pretty darn amusing story about attraction. It brings plenty of laughs from beginning to end. This is only aided by the hilarious facial expressions of vocalist Changsub.

First, we see the guys enjoying some time outside a convenience store (in a warehouse…), Sungjae clearly playing the suave guy with the cool car. Later on, the “ugly duckling,” played by Park Na-rae, awkwardly comes along, bumping into people and trying to get BtoB to look at her. When a pretty woman, played by Jang Do-yeon, walks into the scene, the guys go ga-ga over her and try various methods in getting her attention. Out of jealousy, the “ugly duckling” switches the pretty girl’s can of coffee with “BtoB coffee.”

As the members end up drinking from the can, instead of the girl, the fun times start. Whoever is typically seen as unattractive is suddenly beautiful in their eyes. This eventually leads the guys to seek medical help. Peniel isn’t exactly the best doctor and uses it as a ruse to go after the “ugly duckling” himself.

In the end, we see the group defend the “ugly duckling” and some hilariously awkward head rubbing by Ilhoon. Meanwhile Sungjae enjoys a love-shot with the pretty woman. All-in-all, the MV is entertaining.

However, is there a deeper meaning to the MV? There are three possible implications within the humor. 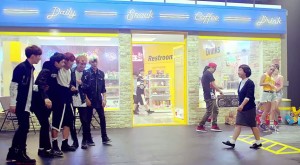 During those times, the guys will hear nothing bad about the person. This included physically removing a man who points out the unattractiveness of the “ugly duckling.” That sounds like typical behavior for the “crazy in love” phase. People will fight over whoever they are attracted to, whether it makes sense or not. The lyrics themselves support this idea since the song is about being completely besotted.

Second, there is danger in alcohol and drugs. Granted, this lesson is pretty veiled, done in a way that you don’t realize that this could possibly be given. Some of us have probably heard the phrases regarding others and inebriation: Alcohol can turn a 4 into a 10, and then you wake up with a 2. Ignoring the superficiality of such statements (for the purposes of this analysis), it does make a point within the MV.

The guys had no interest in the unappealing “ugly duckling” until they drink from a suspicious can provided by said lady. From then on out, she receives all the affections of the boys, instead of the typical bombshell character. Only Sungjae was unable to drink from the can, and thus had no side effects. Therefore, we can surmise that the MV is expounding how mind-altering substances will alter your perception and make you do things out of character. Oh, and don’t accept drinks from strangers.

Third, societal superficiality of attraction is also brought up. The guys are thought to be mentally unstable for their attraction to the unappealing “ugly duckling.” You see the boys being examined by doctors and even acting like they’ve lost control of their senses. Is there something inherently wrong with being attracted to someone outside what appearance society deems to be acceptable? I don’t think that the producer/director is agreeing with this idea. Instead, the MV seems to point out how absurd it all is by making it a mockery, especially since the boys are never shown to stop being attracted to the “ugly duckling.” Sort of like “hahaha, yeah, I’m crazy. I’m alright with that.”

Or perhaps the MV is just funny without any meanings whatsoever. 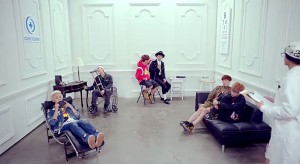 From the MV, we can see that the dance for the track is also a bit silly. Even though they use chairs as props and treat us to some greasy looks, the dance isn’t as sexy as you’d expect in relation to the song. Instead, it’s cute and dorky, particularly during the “lalala” parts of the chorus.

Speaking of the “lalala,” as to the song itself, it’s another catchy track from the group. It takes a few listens, but eventually you can sing along with the chorus fairly easily. While the song is not as instantly catchy as “Beep Beep,” “You’re So Fly” is still a good song. The track is instrumentally a dance-R&B hybrid. It combines electronic danceable sounds with a smooth beat. This combination style really fits the group well. The vocalists can show off their higher registers, and the rappers get more lines. Well, except for Peniel, anyway.

The lyrics are slightly sleazy, though.

Oh this is the moment
There’s no need to think about it
Just come into my arms
The place to be is a club filled with girls?
No no, I’ll follow you around like your private soldier, like a flowing stream
Lala, I’m heart is pounding, hot hot, it’s getting hot, look at me
I mean what I say, don’t play hard to get, don’t spin around but just come right now

They have the appearance of not just being about being smitten, but rather being a bit overeager. Despite the girl being evasive, the guy keeps pursuing. He comes off as creepy and obsessive when in love, even though he appears to have just met the girl.

The retro feeling music and funny MVs are becoming a trend for BtoB. Personally, I hope this trend continues. They seem to be able to unleash their inner silliness that we see in their behind the scene videos. Overall, “You’re So Fly” is fun, but these guys need to learn that going slow goes a long way.