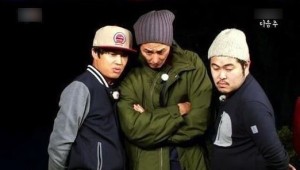 It was another eventful week in K-pop — really, what is it about K-pop and eventful weeks in 2014? Friendships were tested, heroes were made, legends returned, loves were lost and found and the weary returned home. The following are the top 5 Things I Loved in K-pop last week. If you’re not up-to-date with your K-pop, beware because spoilers most definitely will arise.
5. I Am A Man

Not I, but Yoo Jae-suk and his cohorts on his latest variety venture are — a talk show of men, by men and for men. The show discusses various topics that men in Korea have to deal with and co-stars actors Kwon Oh-joong and Im Won-hee and gag men Jang Dong-min and Heo Gyeong-hwan. My affection for Yoo Jae-suk notwithstanding, I found the show to be interesting and funny, which also seems to be what a lot of women in Korea are also thinking who have been tuning in — possibly trying to understand the psyche of their men. The show is not doing great in the ratings, but I’m happy that KBS has been providing it on their global YouTube channel with English translations (episodes are a couple of weeks behind the Korea schedule). Check out their latest uploaded episode which deals with men in relationships or married to older women.

Roy Kim is back to K-pop after a year away studying at Georgetown University following a somewhat tumultuous debut. The title track of his album “Home” and its accompanying MV reflect how the struggles that happen in life can be overcome, or made a tad easier, when you have a loving family and/or a warm home to return to — no matter how humble it may be.

3. Trying to love a Blade Man

Blade Man is more often than not a bit off balanced with the main “hero” more crazy psychotic than crazy good most times. Once in a while, though, there are moments, just moments, that are so good I can’t help myself and keep watching.

Known to some as the ‘Godfather of K-pop’ and to others as the ‘President of Culture,’ Seo Taiji, the legendary singer/song writer in the realm of popular Korean music, has made a comeback after years lying below the radar. The first single from his new album was released in two parts, the first a collaboration with IU and the second, his own version, released on the 10th. It’s a surprisingly soothing song with electronic beats and a haunting MV that reflects some of Seo Taiji’s memories and regrets while growing up in Sogyeokdong, Jongno.

I think YG’s got a winner with iKON. Every week on their survival reality show Mix & Match they continue to put out awesome performances. Jin-hwan‘s group did an adorable version of Bruno Mars‘ “Treasure” with the help of Akdong Musician‘s Lee Soo-hyun. It’s hard to imagine that, even with a solid performance like this, the members are in jeopardy of being cut from the group because they are, at best, in second place and, at the worst, last.  There are only two more weeks of Mix & Match left until fans find out who will be in the final line up for iKON.

Those were my picks for the top 5 Things that happened in K-pop last week, but were they yours?