Side B: ZE:A's Hidden Gems 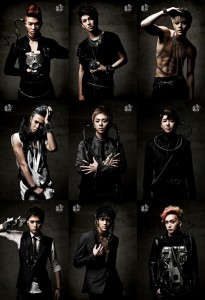 Beneath the K-pop industry’s glossy exterior lies the hidden labors that almost all K-pop idols endure. ZE:A’s leader Lee Hoo was the latest idol to acknowledge such activities and while things seem to have been resolved, the incident serve to highlight ZE:A’s precarious position in the world of K-pop.

Since their debut in 2010, the nine member group has never once won #1 on a music show (excluding Immortal Song 2) despite having many members relatively well-known to the public — Kwanghee, Dongjun, Siwan, and Hyungsik all come to mind. It’s a shame as their extensive discography is littered with many little-known gems.

In this Side B, we take a look at some of those gems and explore their musical growth as we await further news on their status both within their company and the larger K-pop industry.

From their second EP, Leap For Detonation, “Man 2 Man” is underwhelming at first but once the chorus kicks in, it’s hard not to enjoy the song. The vibe of the song — simple with a hint of aggression — follows the lyrics of one man calling out another for making a girl cry. “Man 2 Man” is far from flashy but the simplicity of the song is part of its endearing quality.

ZE:A’s second full album, Spectacular, is where the hidden gems begin to multiply. “Love Is Gone,” the album opener set the tone for the rest of the album with a marked increase in quality from past releases and the lack of auto tune. The boys also show improvement both in singing and rapping.

The subdued “Never End” reflects the lyrics of lamenting over one’s mistakes in a relationships and asking the other person not to leave. Once again, the music of the song is simple but still appealing, with the chorus elevating the song.

“Dirty Cat” is definitely the stand out on Spectacular. It’s reminiscent of “Man 2 Man” albeit more polished. The fast paced beat and saxophone makes the song fun and energetic. Not to mention the unexpected but oddly fitting cat meow in the latter half of the song. If you didn’t know what song to use to introduce your friends to ZE:A, “Dirty Cat” is the one.

ZE:A took on 80’s influences in “Crazy,” an uptempo song that eschews their former simplicity. The song deserves several listens, especially with a focus on the background music. The synth, subtle guitar riffs, and cymbals transform “Crazy” into an entertaining and refreshing song. In fact, it is one of ZE:A’s best songs to date.

Smooth vocals are well-paired with an acoustic guitar on the unfortunately named “U’re My Sweety.” What stands out in this song is ZE:A’s harmonization — it’s perfect and charming — and the toned down rap. Compared with  “Begin With A Kiss”, “Ur’e My Sweety” is more mature and refined, reflective of their growth.

While ZE:A had a rocky start with a weak debut, a dip into their discography reveals the growth of their prowess and the increasing quality of their musical production. The group has many solid B-sides tucked away in their EP’s and albums and it is a shame they are not more well-known. Although the fate of ZE:A is unknown due to behind the scenes issues with the company, here’s to hoping their next comeback is better than ever and that they finally, finally win #1.

Which of your favorite ZE:A B-sides should have made the list? Let us know in the comments!