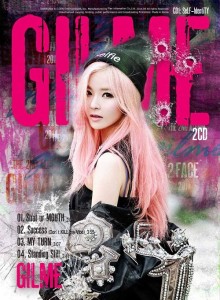 In a real comeback fashion, Gilme has recently released “Success (Don’t Kill My Vibe)” off her latest album 2 Face. The album is a double CD album with two promotional tracks. The other title song, “My Turn,” has not yet gotten the video treatment but has been promoted during her live stages. All of this commotion comes four years since Gilme’s last album, Love Actually, which was released in 2010. This is not to say that Gilme has been completely absent from the K-pop industry. She has been a prominent singer on Immortal Song 2 and had digital releases sporadically in recent years — especially dabbling more heavily within the R&B genre. However, “Success (Don’t Kill My Vibe)” is solely rap. It is interesting how she has made more of a name for her singing but may not be as well known for rapping. Gilme absolutely impresses with this comeback.

1theK notes in the description of the video that Gilme “shows her charisma where she tells about the truth of her past where she’s been locked up.” Let me just say that I did not know any of that when I first watched this MV. I assumed her lyricism implied more about creative lockdown and of being forced to hide her true identity in the industry.

“ Why do I have to keep putting on this mask of music that doesn’t even have me?

Until when do I have to keep this on?”

There is a running thematic allusion to being stifled and held back. Gilme’s mask makes her feel suffocated in multiple arenas. She is struggling to breathe under the tyrannical hold of the symbolic mask, and “Success” reveals her inner struggle to find herself and derive meaning from gaining control over her work. 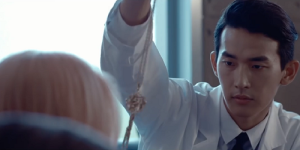 This song from Gilme is excellent. It starts with a piano intro before the horns and drums kick in. After the beat drops, she unleashes a fiery rap barrage and continues her rapping for the whole duration of the track. The song production is fairly standard, and the real star belongs to the words of the song.

The MV mirrors the lyricism with Gilme putting on the aforementioned mask. She attacks the rap verses in a dark room with only one light illuminating the fringes of her body. There is no place to hide, and Gilme appears as an earnest figure spewing the words of her struggle. (Side note: Perhaps the light can also represent the drive keeping her going all these years — although that might be a stretch and an over-analysis).

There is another prominent sequence of scenes where Gilme is talking to a therapist. He ends up trying to induce a hypnotic state where she would discuss the things that are bogging her down. Boy, does she have quite a few chips on her shoulders. This is probably one of the strongest hints of being locked up. Her lyrics suggest being apprehended:

“Key to the handcuffs that held me back

I don’t need them any longer.

I will get rid of them.

The new name I got after destroying them all is success.”

She metaphorically attacks this control by those who are in power. It is intriguing that she refers to wresting control and using success to propel her from the perils of her past. It is empowering to see her own up to her past while reclaiming her future with her drive to succeed.

While the video did have interesting imagery to accompany the song, a lot of the shots simply showed Gilme delivering her rap. This did end up working quite well because it drew focus on the impassioned story she was telling. To be fair, some of the other sets she sang over had intriguing geometric shapes such as the music set with elongated mics and the set with rectangular window-looking objects.

Gilme has certainly impressed me with her writing in this comeback song. The story is full of double entendres, and her motivation to gain autonomy over the success of her career is a positive outlook. The choice of words she used like “scarecrow,” “mask,” “puppet,” “zombie,” “Pandora’s box,” and “survivor” are strong comparisons that illuminate her past analogously.  Honesty and great writing make this a success, and Gilme delivers her empowering anthem with a profound gusto.