Mesmerized by Secret’s “I’m In Love" 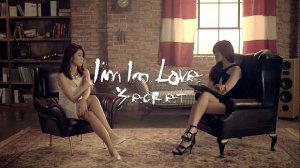 The ladies of Secret are finally back again with their new EP Secret Summer. Along with it, they have shot a dramatic MV for their title track, “I’m In Love.” The group has spent a fair amount of time with promotions in Japan this year along with increased solo activities. After working with Hyosung on her solo song “Good Night Kiss,” Duble Sidekick have taken on production for the quartet with this latest title track. The MV plays on the colors of black and white to represent the psychology of love.

If we look at Secret’s discography, “I’m in Love” would fall somewhere between “Poison” and “Talk That” in terms of sound. The production isn’t as bold as “Poison” nor is it as emotional as “Talk That.” I think that is likely my gripe with “I’m in Love.” It is a safe single that attempts to emulate the Secret sound without contributing anything new or interesting. It is safe and feels like any other standard Secret track. Luckily for the group, their group has a strong ability to sell any song and the end product is still quite catchy. However, the production side leaves much to be desired. The verses were well emoted, but the chorus is a bit forgettable. The girls repeat “think I’m in love,” but there is really no conviction there.

One thing I do appreciate about this track is that it allowed Hana to both sing and rap. Her rap breakdown came about midway into the song, and the change up was welcome. Hana’s part gave the song character in its production. Perhaps this is where the rest of the track should have headed. Instead, it felt like there were three different types of songs in this track. Each part had its moments, but in this case the sum of the parts may be greater than the whole. Hyosung’s breakdown cut out almost every instrument except for the piano three quarters of the way through the song, but it was jarring and an awkward transition within this song. Hyosung got a majority of the lines this time around while Jieun also got a chance to show off her vocals on the choruses. It did seem like Sunhwa had only a few short lines which is a shame because all of the ladies of Secret can hold a tune. 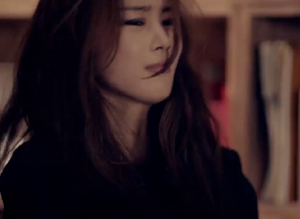 The MV is well done. The video is fairly simplistic. It features a variety of sets and utilizes them well to produce a nuanced tone. The acting in this MV is a highlight. All the girls play two different characters – the forlorn and the confident. Sunhwa especially stands out in her confident solo scenes as she is dressed in black. She brings out an aggression based in passion just with a few different movements. Sunhwa’s eyes and emotion helped to sum up the lyrical content and inner strife.

Speaking of the clothing color, it teeters between the girls dressed in white and black. In this case, the color that they wear in the therapy room represents their state of mind. The director attempts to emulate the push and pull of conflicting feelings in this tangible aesthetic. Using the duality of black and white to express the opposite ends of the spectrum is clever and the girls are able to pull it off with their acting chops.

The ending really sold the video. As the MV progressed, quick jagged lined cuts added an erratic theme. As the cuts became more consistent during the therapy scenes, the parallel between Hyosung and the therapist became drawn. At the end, she is seen sitting across from herself. Then, it became obvious that the video was making a statement on how a person will analyze themselves and agonize when they are confused in love. 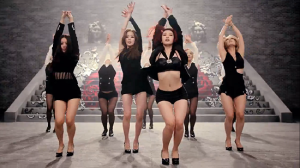 Another thing that made this video so great was the dancing. I always felt that Secret had some of the most charismatic dancers, and it shows in this performance. The girls hit the beats and exert a commanding stage presence. While the dance may not have any signature dance move, Secret put their all into adding a dramatic tinge to the dance. They are sexy and confident in their moves, so they pop even amongst their sea of backup dancers.

Overall, I feel conflicted on this release. I adore the video but find the song lackluster. It is truly a testament to the talents of these ladies that they can take uninspiring material and make it captivating to watch on screen. The video is certainly another great addition to the Secret videography as it pairs great editing with a good thematic plot. I am certainly looking forward to seeing the live stages as Secret are sure to give off great energy.