Say Yes Comes Back with "Get Out" 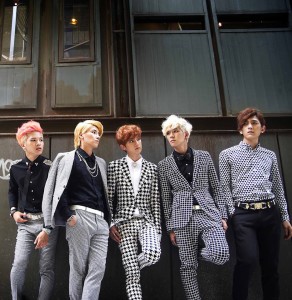 After almost a year away, band Say Yes has returned with a new mini album, and a new image.

With their first release, “Say Yes,” the group had embraced a clean-cut image, innocent image. The track also took on more of a sweet pop-rock feel – which lead to those ridiculous CNBLUE comparisons. However, their latest track, “Get Out,” brings a stronger, bad boy image with a rougher sound. This is actually welcomed, since Say Yes manages to not look like kids playing pretend.

“Get Out” is a rock love song – or rather a song depicting love lost. The track expresses how a woman has become the “red sun” for the guy. In other words, the woman has hypnotized the man with her beauty. Even though the couple is not together, the man cannot forget her and asks for her to “get out” of his mind. Poor guy still wants the girl.

English introduction tracks can be good or bad in K-pop. Initially, the introduction throws the listener off, with the strange inflections used. In the end, it just gives off a “meh” feeling – neither good nor bad, just random.

The reason “Get Out” is likely to infect the brain is the little shouts and syllables throughout the song. First, there is the “dararara” peppered throughout the verses and at the ending. Then, we have the “yeahs” during the bridge. The band also invites listeners to join in the song singing “nanana.” Even if the audience isn’t inclined to like the song, the pull to sing along with Say Yes is still there.

Oh, and they actually have members who rap. I’m not talking the “rapping” we see that some bands like to employ. But, rather, members who seem to have some sort of skill and flow that makes you believe they aren’t just speaking quickly. They also have the attitude to match.

“Get Out” follows typical rock instrumentation; except for the random, unneeded whistle. If there is one bad thing in the instrumentation, it’s that dang whistle.

Filmed in the Philippines, Say Yes runs amok and creates a bit of trouble in the “Get Out” MV. The MV begins with a car chase and ends in a humorous arrest. (In a nice car, too.)

Initially, before figuring out the lyrics, the shots of the swimsuit clad women are a bit out-of-place. The song is about a beautiful woman, so it makes sense. Truthfully, the club shot is probably the only part of the MV that is truly relevant to the lyrics. The guy sees his girl with another man and throws an angst-filled tantrum in the streets. What a waste of a guitar, though.

I also think we now know what happened to the huge stone that Block B lost in “Nillili Mambo:” Say Yes stole it and took the gem to the Philippines. Why else would they be running around with that briefcase?

“Get Out” is a rambunctious take on criminal activity. We have gambling, good-looking females, chasing around someone carrying a briefcase, close up shots of a guy in front of some graffiti. Yes, that sounds a bit stereotypical of MVs depicting crime. However, the differences lie in the details, such as the band playing in the middle of the street and the party scenes.

The story line is essentially this: three of the members are up to something suspicious at a casino and gather a briefcase filled with, 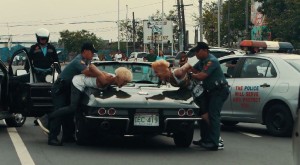 what we’ll assume, is cash. The other two members are the big troublemakers who throw the other three for a loop. After fighting, the two troublemakers take off with the briefcase, with the rest fast behind them in pursuit.

The troublemakers make a bit of a mistake: stopping to play slots. That’s truly a “Here’s Your Sign” moment. Who stops to play games when being chased for stealing money? Understandably, this is a funny bit to the plot.

They are of course spotted by their pursuers and make their getaway. However, they are randomly caught by the police. Where did the police come from?! Perhaps a responsible citizen called after seeing the group chasing each other down that street. Or maybe the three members called the cops themselves out of desperation. Or even better, Block B called wanting their loot back. This will probably remain an unsolved mystery.

“Get Out” is an ambitious MV for the group, and they do a decent enough job. While it lacks some plot cohesion, it’s still a fun watch. Also, a little rock amongst the pop never hurt anyone.

Say Yes seems to be finding their identity amongst all the other K-pop bands out there. A combination of rock and pop rock, Say Yes mixes things up with their unconventional instrumental abilities – which would be nice to see included more in their next title track. Keep a look out for what they come up with next, which will hopefully be before another year passes. 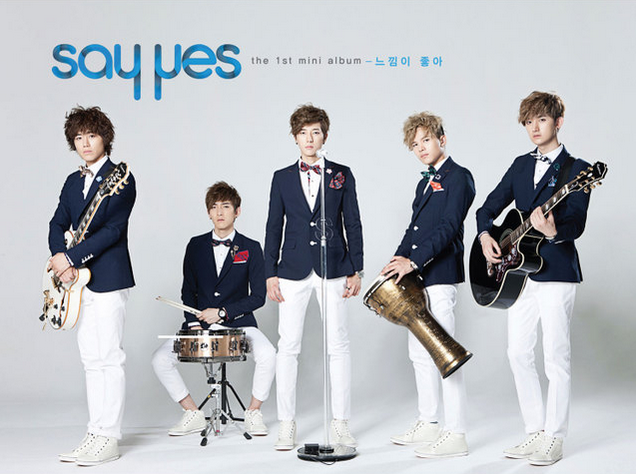 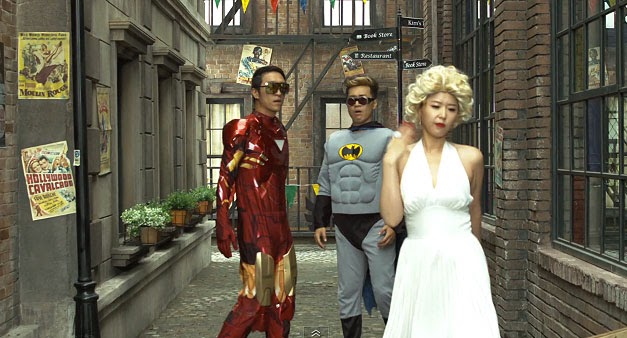