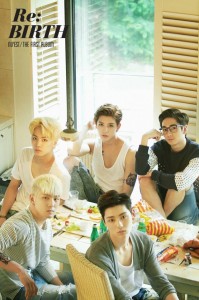 When NU’EST debuted, they appeared to be a group who would tackle pertinent issues of society. However, it seems the group is now heading toward more typical K-pop topics. After saying “Hello” and “Sleep Talking,” NU’EST is now intent on saying “Good Bye Bye.” Compared to recent tracks from the group, “Good Bye Bye” reignites interest and brings something pleasantly new from the group.

Initially, the music seems to be a departure from NU’EST’ typical electronic fare. The piano line takes center stage, coupled with a strong bass drum. There is also a bass line in the bridge that effectively transitions the song into the bridge.

However, about 2 minutes and 40 seconds in, we are reminded that this is NU’EST, which equals electronic music. Therefore, we get the breakdown, albeit a slow one. As soon as it appears, this dubstep break disappears and the main instrumental line comes back. It’s just a bit heavier till the end of the song. This lack of persistent electronic music, with mostly subtle background electronic noises, makes the track pretty pleasant.

“Good Bye Bye” is a farewell song to love. This is not a new topic, but nothing is new when it comes to song topics. The track actually sends a few mixed signals. The members understand that the relationship wasn’t good, and are saying good bye – just as the title suggests. Later on, though, the song refers to a future meeting:

My eyes and your lips
When they meet again, we will shine

While the song speaks of strongly moving on after a breakup, the MV seems to depict the opposite. NU’EST is having a tough time with things. Or maybe the pain exhibited is only a dream – only way to make sense of JR‘s final scene.

In general, the MV depicts what we usually expect from a breakup song: looks of sorrow, while posing in random rooms, and then screaming. Yet, “Good Bye Bye” also uses some rather…unconventional…plot points to further the notion of an emotional struggle.

JR’s simulation of eating a live fish was definitely the highlight in the MV. Not only does it make the audience uncomfortable, it is a bit more shocking than what we’d normally expect in K-pop.

Minhyun has taken another extreme path in expressing his pain. However, his path is actually commonplace in society: tattoos to express emotion. People do this, so it wasn’t an odd path. Now, tattooing yourself is a whole other story. Who knew that Minhyun had professional skills and a kit? That could have been a bit more realistic, such as using a pen or needle. 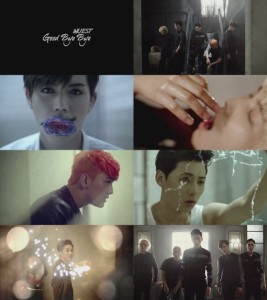 Baekho and Aron are relatively calm compared to the others. Well, if you consider tearing off wallpaper to be calm. Baekho vents his frustrations out on a poorly decorated room, destroying walls, and probably his fists when slamming them constantly. He’s clearly the muscle of the group, since he can break a mirror in the next room. Aron, however, is like a lost puppy crying in an alley. He likely is drunk after leaving a dive bar, and the alley is just as good of a place as any to take a nap.

After the breakup, Ren is actually exhibiting physical sickness. Either he is upset to the extreme or he ate some bad food. Particularly, eating a smoking flower. In the scene depicting him being sick, one moment he’s bent over a toilet, and in the next second, a flower appears in his mouth. Since burning flowers appear later in the MV, it can probably be assumed that it represents him releasing the painful love he still holds.

Of course, a moment needs to be taken to appreciate Ren. Ren had long been recognized for his strong androgynous appearance – to the point he’s prettier than most, and sometimes mistaken for, girls. However, “Good Bye Bye” unleashes his “manliness.” This is sure to get fans all riled up.

In the end, the MV does depict the message of the song: saying goodbye and moving on. Once the dubstep break ends, we see the members suddenly jumping in the air. While it seems rather odd, it’s just the start of them breaking the bonds of the relationship. In a moment of freedom, the group has some fun with sparklers. Yes, it’s cheesy, but it makes the point.

NU’EST continues to change their style with every, extensively spaced out, comeback, so it’s hard to determine the path the group is taking. “Good Bye Bye,” personally, is the best title track the group has released since “Action.” While the MV is a bit darker than their past efforts, it is still a step up and interesting to watch.