The music video title says, “Jeon Min-ju, Yuna Kim_ Good bye Rain ft. Hyun-kyu of Bromance” which is quite a mouthful but considering how it is Jeon Min-ju’s debut, it makes little sense to not have put Yuna Kim as a featuring artist as well. This is only the beginning of the several problems of this botched music video.

Touted as “little BoA”, Min-ju had an unlikely expectation to meet and at the same time, a solid image to make – and she failed at both for little fault of hers. After all, how do you make any impact when: you’ve been consciously styled as BoA, given limited lines and mediocre choreography, and are overshadowed by not one, but two artists? While one can excuse Yuna Kim’s presence as part of the promotion for their upcoming group, what is Hyun-kyu doing in a video that is clearly talking about a woman’s perspective?

Things get cartoonishly dismal when Min-ju starts lip-syncing to Hyun-kyu’s lines. It’s pretty much like watching Ren lip-sync to “Something” except Min-ju is not as convincing. What at first glance feels like a laughable mistake by a rookie turns out to be a preconceived direction by the genius behind the MV. This is not to say it doesn’t sound nice; it just looks very weird, and a part of you may attribute it to an overlooked mistake or poor — really poor — editing. 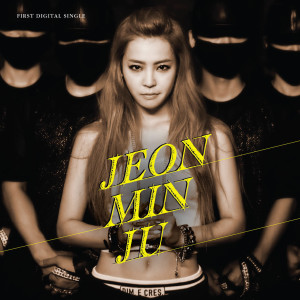 In terms of editing, the MV is a complete mess in this department. We crib a lot about the lack of storylines in MVs, where people dance in a box, but this video could have actually used that clichéd concept to their benefit. Instead of creating a painful hodgepodge of drama stills and dance stills — that too in random places — it could’ve produced a cohesive dance version video. And this makes more sense because Min-ju is supposed to be a great dancer.

However, I did not see the “great dance” from Min-ju in this video, and it’s not only because of a conceptual flaw. The choreography is not at all sharp, and the execution even sloppier. You have an entire dance break dedicated to showcase her talent but the choreography is so ill-fitted to her that it feels as if she’s not putting her heart into it. Or maybe, she’s just not that good a dancer. Either way, the one thing that could’ve made the video somewhat memorable was to not pay any attention to it at all.

Finally, the whole experience of watching this video becomes unbearably irritating because of the poor quality and the poorer camera work. K-pop videos fall on their excellent visual qualities, to make up for loopholes and weaknesses in other areas — for instance, audio and musical flair. When a video fails to meet this basic requirement, you know that the MV has very little chances of doing well, be it in terms of gaining casual viewers or potential fans. And then you have an exceptional camera performance. It dances around — even more than Min-ju does herself — trying to create dramatic effects that end up inducing visual nausea.

What could possibly have been a power-packed dance performance to a ballad, with BoA’s dancing vigour, fizzled into a confused mess of artists, bad music and bad choreography. Her debut is not only unimpressive but unfortunate, because someone forgot to put the debuting artist under limelight. To cap off, “Good Bye Rain” earns itself a dismal 1/5.