As a regular viewer of 2 Days 1 Night, I have always perceived Jung Joon-young as the weird guy with a lucky streak who claims to be a rocker. So when I finally listened to “Teenager,” I was definitely not prepared for the “baby face, deep voice” or “Chanyeol 2.0” spectacle. Making alternative rock more palatable to a pop-oriented audience, Jung Joon-young taps into his vocal skills and arranges them masterfully in his compact, impactful and relatable music video “Teenager.”

Musically, the song is sombre and restrained. Joon-young’s heavy voice only adds weight to the song, making it dense and grave. There is no release as such, no moment of complete abandon, partly because of his voice quality and partly because of the arrangement, but it doesn’t hinder the quality of the song nor the experience of listening to it since it proves to be a conceptual necessity. Paradoxically, however, the song leaves one feeling light. In fact, it attempts to propagate the message of shedding your binds and following your dreams through the music video. This lightness and breeziness is maintained by the unusual inclusion of the violin, piano and acoustic guitar, which create airy background music to the heavy vocals.

The pop element of this song is glaringly visible to the anime connoisseur because this could easily be the perfect ending OST of an angst anime. In fact, the crescendo sounds very similar to Trinity Blood’s “Broken Wings.” Joon-young knows screaming is not his forte, and he doesn’t delve into it either except after 4:00, but that too is for a limited time and doesn’t sound particularly jarring. 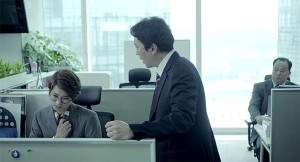 Coming to the MV and the lyrics, both complement each other perfectly. Despite the fact that I couldn’t get hold of any proper translation, a grueling war with Google Translate did reveal, however dismally, a strong connection between Junggigo’s lyrics and the MV. The song with its title “Teenager” literally tries to rouse the ‘teenager’ in the boring adult. It’s interesting how instead of going for the clichéd phrase – “discover the child in you” – it calls for the ‘teenager’ – the epitome of rebellion, assertion and enlightenment – to rise and dream.

While the music video may seem to support the act of accomplishing one’s dreams, the basic aim is to persuade people into dreaming. Adulthood often aggressively demands an eternal stay in the “real” world, relegating imaginations and dreams to passing fancies or childish indulgences, making adulthood boring, dry and monotonous -– a punishment. Joon-young doesn’t ask for an abandon of adulthood. Even when he leaves his job and goes for the concert, there is no implication of the fact that he went for the concert instead of working – the post-it on his computer screen shows that he had prepared for the concert and that it was after 5 i.e., after the symbolic “9 to 5” period. All he says is that you shouldn’t let “adult” concerns control all aspects of life; learn to breathe, learn to live.

The video opens with a reference to a popular American rock song “Hold the Line” written by David Paich and performed by TOTO. The title itself reiterates the concept of restrained freedom – rein your freedom, be the controller of your own freedom – and the lines “It’s all about the way you do the things you do/ The way you do it/ You’ve got to hold it/ Hold it” from the song succinctly captures the message of “Teenager.” 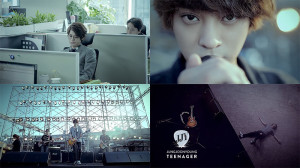 Apart from the broader message on freedom and dreams, Joon-young posits himself as the quintessential teenager within the first few seconds of the video. His clothes reveal that he is in a period of transition, a misfit amongst the well-suited adults. He listens to rock songs instead of indulging in the ‘manly’ pleasure of watching a Victoria’s Secret fashion show. He is bullied by his senior and is shown to be suppliant to hierarchy except, just like a teenager, he decides enough is enough and walks out.

Joon-young transforms into a ‘teenager’ when he gets rid of his formal clothes and his spectacles -– all signs of maturity -– and slips into casuals. There is no vandalism nor an overdose of the rebellious black – an overt expression of rebellion – as Joon-young keeps it subtle and relatable, be it through his casual attire or his not-so-animated singing. This kind of revolt seems more accessible and practical.

Ending on a high note, when Joon-young finally falls on the dusty ground, there is a sense of exhilaration but not tiredness. The moment is ephemeral, but it leaves you with enough energy to enjoy it — overspending yourself is not his idea of freedom.

This music video proves that it’s often best for artists to take charge and compose their own songs since it allows for them to highlight their strong points and experiment with their singing style. And it makes it possible for them to dream and chase their dreams.