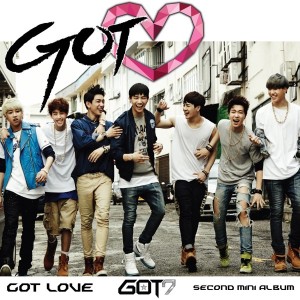 Among the youngest boy bands of the Big Three, it could be argued that GOT7 is in the most comfortable situation right now. While EXO‘s year has been filled with an assortment of scandals and WINNER is, after a long time, finally gearing up for their official debut, JYP Entertainment‘s new moneymaker seems to be settling into the scene and slowly developing its image.

Although the group only debuted about half a year ago, they have already ticked off some of the essential steps any band has to take to be considered a proper idol group. Through their YouTube show Real GOT7, their fans had the opportunity to get to know the members individually and their dynamics among each other. It also gave them a platform to unveil their fan club name (“I GOT7” — not the most creative choice). In preparation of their comeback, they have participated in their own official variety show as well, and have visited Arirang‘s After School Club multiple times, as any group with at least one fluent English speaker should.

All of this, of course, was to prepare fans for the release of their new record GOT♡ (alternatively titled Got Love). With five new songs and three remixes, the group has pretty much exhausted the format of the mini-album and has listeners hoping that the next comeback might involve a full album.

But, let’s first take a look at the current situation: The first song on the album is “U Got Me“. It already combines two of the group’s most notorious features — the title is yet another play on their name and as the album’s introductory song, “U Got Me” screams ‘I want to be hip hop’ just as much as GOT7’s former outfits do.

By employing an engaging rhythm a la “Drop It Like It’s Hot” during the verses, the song luckily is much more successful in fulfilling this claim than the clothes were. “U Got Me” is securely in the hands of the group’s rappers, who do an okay job. The R&B-infused chorus gives the vocal department an opportunity to shine, which especially JB uses to his advantage. The lyrics are the usual fare of the speaker confessing to a female how much he likes her, and how her charms overwhelm him.

As is often the case, the second song on the album is the single “A.” With its intention of presenting the members as sweet (and slightly teasing) boyfriends, this is a pretty stark contrast to the first song. It’s not difficult to understand how “A” might split fan opinions the way it does: If you enjoy an upbeat dose of pure pop goodness, with the occasional violin thrown in the mix for increased romantic effect, you will definitely like this song. Otherwise, this might not be the one for you.

The lyrics are an interesting spin on the content of GOT7’s debut song “Girls Girls Girls“. While their debut had them boasting in a rather general way about their appeal to the female population, “A” seems to continue the speaker’s storyline. Even though he is now focusing his attention on only one girl, the speaker still cockily asserts that he is aware of her affection and that she should just admit that she likes him already.

The following song “나쁜 짓” is probably the most irritating thing on the whole album. GOT7’s singing and the electronic beats underlying it are not harmonizing very well, which keeps the listener from getting immersed with the music. This song could be a grower but it also has huge potential to be the most annoying song after a very short while. 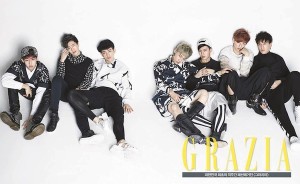 The song’s English title, “Bad Behavior”, seems like a (deliberate?) reference to another famous Canadian hip-hop artist but the lyrics shatter this perception. The speaker is once again talking to his potential girlfriend, imploring her to be honest with him and to talk to him about problems they seem to have in their relationship.

“Good Tonight” is partially known to the listener already; at least if they have been interested enough to watch GOT7’s latest music show appearances. It continues on with the rhythm that seems to permeate the whole album, but is perhaps more of a party/sing-along song for the general audience than either “U Got Me” or “나쁜 짓” are. It’s a pretty good one at that, as the listener will barely be able to keep their toes from tapping along. GOT7 is doing a good job in this, and especially Jr. and Youngjae surprise with their great falsetto in the later part of the song.

The lyrics might be an invitation by the speaker to party the night away, but some of the lyrics suggest a more explicit content:

The last new song, “Forever Young“, would be a nice R&B song if JYP Entertainment had not chosen to give it a decidedly dated appearance by tainting specifically the rappers’ voices with a bit too much autotune. The lyrics are nothing new either, as they are once again a confession of love by the speaker. Apart from the misplaced and repetitive use of the word “shawty”, it’s still a nice song which would make for a good theoretical outro from the album.

This is not quite the end of GOT♡ though, since it was decided to add three remixes of “A” to the album. The first remix by collapsedone seems like a direct continuation from “Forever Young”, maintaining that summery feeling by adding a simpler instrumentation, featuring a prominent guitar sound, to the song. This makes “A” sound much gentler and more romantic than the original version. 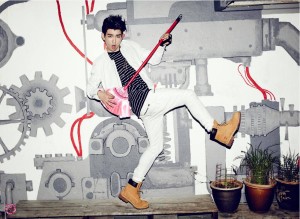 The second remix by TOYO goes for a slow R&B vibe. The idea in and of itself is good, with the music sounding like it could be straight off of Crush‘s (amazing) debut album, but the singing is a bit too quick for this music; making the song seem much more hectic than was probably intended.

The last remix by FRANTS finally completes this steady intensification by going for an all-out dubstep sound. This version is recommendable since it changes the song the most and therefore is the most interesting experience, but dubstep has been so overused these past years (particularly in K-pop) that many listeners might not appreciate this remix.

All in all, GOT♡ is a stable effort. The cohesion on this mini-album might not be the best, as JYP Entertainment simply tried to accommodate too many different genres on it. But the songs individually mainly range from listenable to jammable, which is the reason for the album getting 3 out of 5.

For future albums, it would be advisable for the rappers in the group to keep working on their skills since they did not always deliver convincing performances on this one. Even though the singers’ voices are much appreciated, it seems wrong that they should be the best part among members who are continually touted as a rap/hip-hop group.