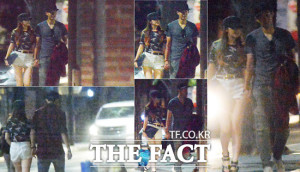 2014 is becoming the year of the idol relationships. The latest addition is Minah of Girl’s Day. News has been released regarding her relationship with soccer star, Son Heung-min.

News source, The Fact, were the first to reveal the couple. It appears the couple was spotted on two dates earlier this month. After conflicting statements, Minah’s label, DreamT Entertainment, has confirmed that Minah and Heung-min have been on just two dates. The two were previously friendly with each other and decided to see if there was any romance, also.

Unlike previously revealed relationships, this one only took two weeks. That’s right: Minah and Heung-min have been “dating” for two weeks. Two reported dates hardly count as an actual boyfriend-girlfriend situation. Since this is in the fledgling stage, and truly too soon to call it an actual relationship, it remains to be seen what will happen in the future.

There has been criticism that Minah is dating out of her league: he’s too good for her. There are also accusations that the dates began closely following the breakup of Heung Min and his previous girlfriend. Given the negativity, there could be another instance of where a relationship damages the popularity of a group — hopefully this nonsense won’t be the case for Girl’s Day.

Son Heung-min is scheduled to go to Germany, where he plays for Bayer Leverkrusen. Girl’s Day is currently in the middle of promoting “Darling.”

(The Fact. Images via Xsportsnews and The Fact)