'Roommate' and the Ensemble Cast 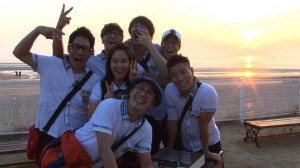 A big draw of watching variety shows, especially cast-centered ones, has to be the ensemble casts that comprise the mix of personalities and roles that interact and react with each other. Given that Korean variety shows all tend to be scripted to different extents, having the necessary mix of personalities, such as the “Dumb and Dumber duo,” the Stooge, and so on, is vital to create the situations for the humour and antics one anticipates in variety. Variety shows that have successfully capitalised on this formula have been rewarded with high ratings, relative longevity on networks and general love for the cast. Examples include Running Man, 1 Night 2 Days, Infinity Challenge and the first seasons of Family Outing and Invincible Youth.

A relatively recent addition to the roster of variety shows, Roommate, as its name suggests, promises to reflect the hijinks and drama of putting together a number of celebrities in a house to live together. Despite the initial premise, it would hardly be unfair to say that Roommate took several episodes before it started to have a semblance of, well, actual roommate-type fun when the cast began warming up to each other.

Of course some of the initial roughness can be attributed to growing pains. The fact that several of the more well-known cast members have more schedules and hence less screen time has resulted in complaints that members like Bom, Chanyeol and Lee Dong-wook serve as nothing more than viewer-bait while the lesser-known members dominate each episode’s 100-minute running time. However, for better or for worse, the disparate threads that are the various members have begun to converge to form a more coherent narrative arc for the series’ premise to play out. 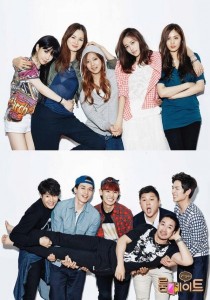 The most recently-aired episode 6 is a prime example. Unlike the previous episodes, where choppy editing resulted in each episode looking like a random collection of footage from different incidents throughout the week’s filming, episode 6 was able to deliver a sustained, overarching “narrative,” in which Bom and actor Min-woo team up to convince everyone that they are dating (for real). While the episode essentially serves as an extended hidden camera, it nevertheless is a refreshing change from earlier episodes due to the unexpected rapport of our Highly Odd Couple, who go to great lengths to flaunt their newly-minted relationship but then meet their match in the (deliberate?) obliviousness of the other members.

For all the buzz about having a bunch of celebrities living under the same roof, there has been very little drama — manufactured or otherwise — but at the same time, having the entire cast only come together for meals and late-night meetings makes it difficult to appreciate the “family” dynamics that are much more quickly established in shows like Family Outing. Of course, part of it lies with the fact that these celebrities do, in fact, have careers and other commitments to fulfill while filming, but the revolving-door nature of some members’ appearances hardly adds to the entertainment value of the program.

However, if the Bom and Min-woo episode has proved anything, it is that Roommate’s strengths perhaps lie instead in the smaller interactions. Personally I’m most sold on the heartwarming mentor-mentee relationship that has grown between veteran rocker Shin Seung-woo and idol Chanyeol, especially when they discuss music composition together. The Sora/Bom/Ga-yeon trio, with their age gaps of roughly 10 years between each of them, is also equally endearing, such as when Sora and Bom attempt to share their beauty secrets to “staying young forever” with maknae Ga-yeon. Thus, what Roommate lacks in cast-wide bonding, it more than makes up for when the members interact with one another in pairs or trios. 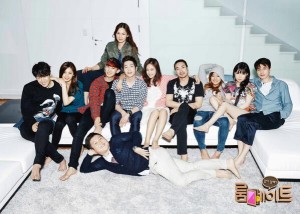 Maybe it’s because it’s still in its infancy, maybe it’s bad scriptwriting, or maybe it’s just that the members themselves have yet to find their respective variety niches, but surprisingly Roommate has yet to create memorable variety personas for the majority of the cast. No one really fills the comfortable variety archetypes, such as the Comic Relief, the Ace, the Pretty One, and so on, on Roommate. One can only crack the “Shin Umma” joke so many times every time Seung-woo cooks, and in a cast of 11, having only one variety moniker after 6 episodes speaks to the fact that, for now, the show is still searching for its variety-legs, so to speak.

At the same time, the most recent episode makes it possible for one to be cautiously optimistic that the cast members of Roommate have the potential for the same type of endearing, viewer-rating-inducing chemistry that their counterparts on other variety programs have. If not, well, at least I got to see forever-2NE1-fanboy Chanyeol play the piano accompaniment for “Missing You” to Bom on Roommate.