Highlights of the K-pop Dream Concert 2014 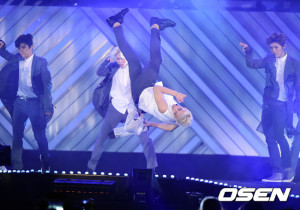 Dream Concert claims to be a government funded event intended on tackling social issues and themes every year and while I didn’t see explicit social themes in the concert, it is a fact that the proceeds from the sale of official merchandise at the event will be given to the underprivileged youth.

The concert overall was bland and boring leaving a few moments worth a seal clap. As a viewer, I was deprived of a “wow!” moment. The artists seemed tired and uninterested most of the time.

It’s ironic how the artists practice day and night to make an impact in a concert but it’s the fans who sweep away all the attention with their incessant and energetic cheering. A few performances into the concert, and I stopped straining my ears to listen to the idols because the audience with its cheering and fan chants was so much better! Despite fans walking out before SNSD graced the stage, there was no dip in the energy or encouragement, and the show continued as if nothing had happened. While almost every artist got an immensely enthusiastic and encouraging response from the audience, two performances stood out: B2ST and A-Pink.

From the light sticks to the “Shadow! Shadow! Shadow!”, B2ST fans saved a lacklustre performance from being ignored. They managed to create quite a beautiful night and set a higher bar for fandoms to follow in later concerts.

A-Pink’s “No No No” has made me realize that it’s not any popular song — it’s the national anthem of the K-pop industry. A very militaristic, devoid of sugar and fluff, “No No No” was sung by the audience drowning A-Pink’s voices, which did not matter because the fans and non-fans were way better.

Now you would like to think that this was the only battle that happened during the concert, but I beg to differ: Minah and Hyeri‘s fan service battle, Hyeri‘s lonely battle of wrong lip syncing, Flimsy half-skirt EXO vs. Tattered half-skirt B1A4, Flying Tao vs. Flying Mark. While they were all entertaining in their own way, the dance battle between VIXX and BTOB was the best act of the night because apart from performing fantastically, they were playing around, having fun, and had great song selections.

It was not a performance that picked up as it progressed, but rather, it was one that grabbed attention right at the beginning with the rap battle between Ilhoon and Ravi. The rap battle was not half-hearted — a complain I have with most of performances of the concert — it felt more like a duet than a duel with both rappers performing exceedingly well. This was followed by VIXX dancing to “Slave to the Rhythm” — an act that should be made a concert and variety show staple — and a no-nonsense Leo wobbling at the end.

With their easy choreography, laid-back instrumental, and mid-air flips, BTOB’s “Beep, Beep” felt like a fitting answer to the strict choreography of “Slave to the Rhythm”. All of these blended into the final performance that ended with a bang, both literally and metaphorically. BTOVIXX needed to happen. Up next VIXXO?

The implicit themes of this year’s concert seemed to be boring clothes and mid-air flips. While the first was applicable across all genders, the latter was a boy group specialty. BTOB did random mid-air flips, Tao did his signature “Overdose” mid-air flip, which was a strong contender for this prestigious, gravity defying title, along with Speed, but the one I finally decided upon was Mark from GOT7.

Part of it relies on the fact that I know embarrassingly little about GOT7. I did not have a clue that Mark was Taiwanese American, and much less about the group’s “martial arts tricking” dance style. With that uncomfortable confession off my chest, I must say that I was surprised to see the lanky boy taking back-to-back flips. Not only was he easily twirling about mid-air, he didn’t seem to lose focus and continued to add on to the energy and the fun of the “Girls, Girls, Girls” performance.

This category shouldn’t be there because the outfits this year were atrociously boring, and Girl’s Day was no different except within the mass of blacks, whites, greys, and occasional shades of red, their white dress with just a pinch of soothing Persian green looked surprisingly great. I guess it is a pleasant change from the compulsory midriff bearing almost every ‘sexy’ girl group has been subjected to leading to the creation of really odd outfits. The only tough competition to them were the dancers in Jiyeon‘s “Never Ever” performance.

Within the limited range of underrated performances, Speed and Topp Dogg’s performances were really impressive. However, Topp Dogg tipped over Speed by the intense execution of their act. If Speed was about having fun with complex choreography, then Topp Dogg was all about aggression and finesse. The group performed as twelve and did not seem at a loss without a member. In fact, the choreography still appeared tightly knit.

The aggression got fascinatingly overpowering during the mini dance battle with the members shoving each other unlike the amiable Ken who hugged it out in the actual battle. The energy did not dissipate with every passing minute but in fact seemed to grow, causing their final performance to be one of the most powerful performances of the night.

Apart from the obvious fact that I am running out of titles, EXO has been chosen for this category because EXO-M was nowhere to be found during the ending ceremony. Them being here has nothing to do with my personal biases. I just found it highly intriguing to not find the M members within the same frame and also not get hold of any conclusive report regarding their absence. Also it has nothing to do with all the VIXXO moments and definitely, not to do with Hong-bin lifting D.O.

Readers, what were your highlights from this year’s Dream Concert?