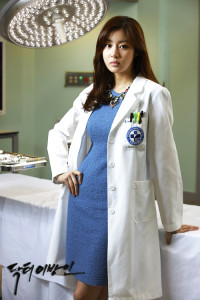 SBS‘s Doctor Stranger continues its reign as ratings gold. This mish-mash of spy thriller, political drama, and medical drama with elements of the classic rom-com proves still fascinating as the drama properly hits its stride.

In this run of episodes, the biggest mystery for hero Park Hoon (Lee Jong-suk) is whether the skilled anesthesiologist Han Seung-hee (Jin Se-yeon) is secretly his lost love Song Jae-hee (played by the same actress) from North Korea or simply a lookalike with the same profession. As viewers, we do not know who she truly is, only that she is collaborating with North Korean officer Cha Jin-soo (Park Hae-joon) on a secret, nefarious mission for their country. Their ultimate plan is so secret that they never discuss it in detail. My wild guesses multiply by the episode, ranging from plastic surgery (Officer Cha tells Seung-hee “I made you”) to amnesia to blackmail. Meanwhile, the battle of the surgical teams heats up, with large amounts of money, prestige, the fate of Myeongwoo Hospital itself, and the lives of two newborn twins at stake. 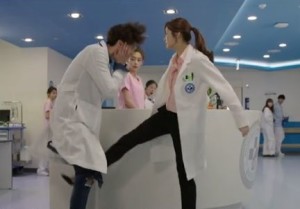 However, before I go any further, it has to be said: The second lead is stealing the show. Thanks to a winning combination of stellar writing and superb acting, Doctor Oh Soo-hyun (Kang So-ra) is causing me to fall in love with her. Her character has a wonderfully complex personality and a real backstory–not a Plain Jane by any means. Thankfully, I also find that she is not written as a perfect Mary Sue. She has an inferiority complex when it comes to her own technical skills, which are believably somewhat lacking, and she possesses a deep desire to prove herself, similar to Hoon’s pathological desire to save every patient.

She also has interactions and relationships with more people than just Hoon because refreshingly, she has a life and career that are not solely focused around the lovable Hoon and less lovable Jae-joon. Her conniving adoptive brother seeks to undermine her at every turn because even though she is the illegitimate child and he the legitimate, their father favors her over him. Her relationship with her father, the owner of the hospital, is equally contentious. In addition, her heartfelt conversation with fellow doctor Seung-hee in the fifth episode caused Doctor Stranger to even pass the Bechdel Test, I was delighted to notice. Seung-hee, the first female lead, is likewise complex and competent, and I love that these two women are not written as trying to tear each other down. K-drama writers, take note! 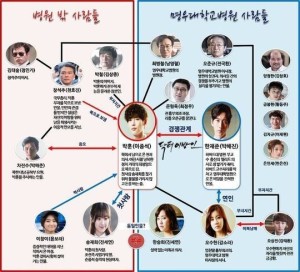 I appreciate that the drama has chosen to tackle not one, but two separate adoption storylines. Illegitimate daughter Soo-hyun went through a domestic adoption into her biological father’s family after her biological mother painfully gave her up. There’s another international adoption storyline that was recently revealed — I won’t say who in case you’re not caught up — but let’s just say I was very surprised to see Holt International invoked on-screen. A transnational adoptee myself, one problem in representation of adoptees is that they are often flat, clichéd, or repetitive, in part because rarely is there more than one adoptee in a TV show, which leaves only one character as a meager representative. Having two different adoption storylines in one drama is cause for celebration.

The moral saga to define “what a real doctor does” wages on, but Hoon pushes the point so much and so often that the writing feels more and more heavy-handed. It isn’t boring necessarily. But when the cast has ballooned to over 20 named characters, and at least 10 unsolved mysteries are swirling around at all times, I think the show could spend more time explaining exactly what the heck is going on with the numerous conspiracies and less time having Hoon recite the same ineffective speeches, since we understand that part of his personality pretty well by now. 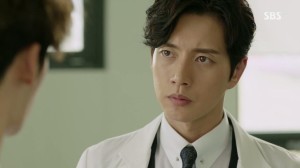 In addition, while second female lead Soo-hyun is engaging and sympathetic, the show has a problem with the very standoffish and unlikeable second male lead, Han Jae-joon (Park Hae-jin). But, if the huge hints are anything to go by, Jae-joon’s character arc is about to undergo a major game changer in the following episodes. I am hopeful that his transformation into a man capable of expressing his emotions will be realistic and nuanced, given the drama’s track record. Doctor Stranger still has my vote for best drama of the year so far, and I’m very excited to continue catching up.