After pre-releasing a MV for “No More” off their album, Beast returns with an upbeat dance music track “Good Luck.” It’s written by Beast’s own member Jun-hyung, and he, biased as he is, has rated it as his top composition to date. “Good Luck” is a prime example of K-pop’s ability to mesh hard-hitting electronic synths and pops with classical music elements.

The intro of the MV immediately hooks the listener with its grand sounds of piano melodies and string instruments. Yoseob opens the song with a raw, heart-wrenching verse, which showcases his unique vocals perfectly. It almost seems like a theatrical play as the character belts out his monologue. 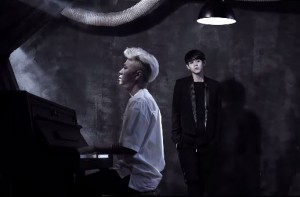 Lest you think this is going to be a Beast ballad, the electronic beat immediately enters, and we’re reminded of Beast’s incredible well-roundedness with their strong vocals and challenging choreography. For a breakup song, “Good Luck” is one of the few that does not merely dwell on the grief and angst. Instead, it seesaws between begging the lover to stay behind and wishing her the best of luck in finding someone else.

The MV brings us the grieving process of a breakup, albeit in a more sinister manner. Either the members take turns to play the role of the jilted man, or the female lead is having multiple affairs simultaneously, mainly because the members all need their screentime. Well, lucky her either way. Let’s go with the second interpretation just because it’s more scandalous. First, we see Doo-joon leaving his sleeping girlfriend in bed, but not before putting on her shoes and covering her with the sheets. As we all know, putting shoes on for your lover foreshadows her departure; thus, this small initiative he takes is his way of sending her on her way without him. 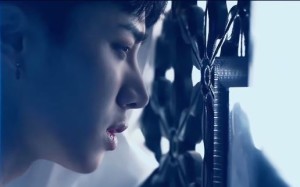 Then, the baton is handed to Ki-kwang in this scene, and he spies on her from right next door while she’s in bed with a distracted Dong-woon. Ki-kwang is devastated to discover her infidelity, and Dong-woon is reluctant to come to terms with it. Lastly, the creepy scene with an emotionless Jun-hyung and many women in identical plain black dresses further emphasizes how all other women lack any colour or appeal to him (the female is dressed in a black dress with golden embroidery).

The Las Vegas concept is drilled into our minds during the dance scenes, with the neon signboards flashing contrasting messages — “Make you mine” and “Wishing you good luck” (not very sure why there is a Chinese sign in Vegas). The gambling motif is fitting many times over, implying how the guy was just a mere game, a gamble to the girl. “I’m just one of your many break-ups but/You are my first and last” sheds more light about the different levels of investments both parties had in the relationship. Also, the woman leaving him is a gamble in itself since she’s taking a risk by leaving someone secure for an unknown future. On the other hand, by not putting all her eggs in one basket, she’s actually maximising her winning odds. So, she’s a much more skilled gambler than our innocent boys. 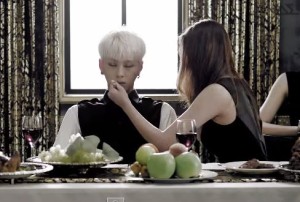 The shocker in the MV comes when one of the women receives a bag of token coins before taking a knife to stab Jun-hyung. Coins fall on the ground after the deed is done, symbolizing the proceeds from the gamble. She betrayed him for money, and her betrayal was akin to a stab through his lovesick heart. And although he totally saw it coming, he did nothing to stop it.

While I initially assumed the song was about a man who broke up in a considerably amiable manner, I received a different vibe from the chorus:

Still the nice jilted lover? It actually sounds more like a bitter ex-lover, sarcastically wishing his old flame good luck, and blessings with her new partner. Although the verses demonstrate his everlasting love for her, it oscillates in the other direction when it reaches the chorus, seemingly fed up with begging her. 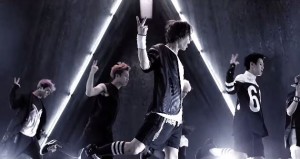 That said, the alternating camera takes between the vibrant Vegas scene as well as the monochrome underground setting once again reflects the pendulum-like feelings about letting the girl go. The peace sign incorporated into the choreography is also ironic. Although they use it to convey “Good Luck,” they can’t be bothered to even face the woman, exuding a heck-care attitude. In fact, the way they flash the peace sign is similar to how one would execute a “Peace out, bro” chest thump.

While the dance choreography looks impressive, I do wish there was more development of the storyline since it definitely has the potential to make much more of an impact. It has the ornate sets, the ominous undertones, and the Vegas motif — all ingredients to an intricately woven love story. For a MV with a relatively mature tone to it, I find it ridiculous that some members are dressed in soccer knee socks — celebrating World Cup season?

In all, Beast once again manages to impress fans and non-fans alike. “Good Luck” is a solid release, with the syncopated beat of the repeated catchy phrase “Good Luck” remaining as the earworm in the listener’s mind, while enticingly mixing electronic sounds and classical instruments. It’s a challenging song with tough choreography and tougher vocals. But no doubt, Beast will manage to pull it off; I’m already looking forward to the live stages.

What do you guys think of the MV?

P.S. What’s up with Hyunseung‘s headscarf?