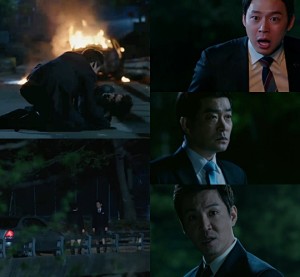 After pushing the final two episodes back a week out of respect for the victims and families of the horrific Sewol ferry tragedy, 3 Days reaches its conclusion. The resolution of President Lee’s fight to stay alive is literally explosive. The pyrotechnics department went all out to ensure that every character in the show got his or her moment with some form of incendiary device.

The last four episodes of the series were most definitely the show’s most dynamic. Kim Eun-hee was certainly not going for subtlety at show’s end. Inevitably that meant the use of some of the lovelier camera and editing techniques fell away, mainly to ensure that the show wrapped up in a way that would both satisfy most viewers and take less time to clean up during post-production. In the long run, Kim left a few things open-ended and unanswered. For example, she mentioned Do-jin’s father as a potential inspiration behind his actions at some point in last month’s episodes. In the end, his mania was pure madness and narcissism.

Making Do-jin just another maniac with daddy issues would’ve unnecessarily forced the audience to empathize with a man whose rationale was much simpler and, quite frankly, much more intriguing and pertinent to the character. I questioned the introduction of Do-jin’s father from the get go. His being brought up unnecessarily forced a kindred objective between him and Tae-kyung that would’ve, no doubt, left the audience with a puzzling and useless sense of unease. It would’ve also just been a means to eke out some shred of humanity in an inhuman monster. 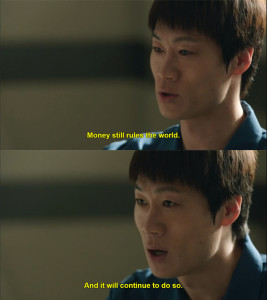 That being said, the story managed to conclude in a manner that was both logical and visually enticing. Kim also managed to sprinkle in her own sociopolitical viewpoints without appearing overly preachy or painfully obvious.

Though 3 Days is most definitely a straightforward action drama, the commentary on capitalism is not lost. Presumably it’s Do-jin’s obsession with money and getting as much as he possible can that drives him to commit homicide without so much as a twitch of his eye. His ideologies draw in a number of secondary and tertiary characters. After all, the sheer scale of Do-jin’s ambitions requires as many people working inside most, if not all, parts of government.

Kim follows through, adding more duplicitous characters to the list of shady people working for and inside the Blue House. At one point in these last four episodes, the audience is incapable of seeing any new character—major or otherwise—without thinking they’re somehow connected to Do-jin.

Unfortunately, that means there is an element of predictability in Kim’s desire to be unpredictable. Cliffhangers, especially in the final episodes, are obvious, if only because we know nothing “final” can happen to the main cast until the director yells “Cut” for the last time. However, the story is intriguing enough that the cliffhangers don’t detract from the sheer amount of craziness that ends the series.

Do-jin’s desire to kill President Lee is as complex as the character himself. He doesn’t simply want President Lee to die. He wants the last moments of his life to be as horrific as possible. Staging his supposed final hours as a recreation of the Yangjinri incident from sixteen years ago, is not only maniacal, it’s cold-blooded to the point of being obscene.

Do-jin’s perverse sense of purpose is frightening. He would willingly sacrifice the lives of every citizen of this small town just to carry out his bidding. It became about more than wanting to permanently silence President Lee. In the end it became about sending one message: the lives of innocent people are meaningless. They’re just a chip to bargain with and only as useful as their ability to garner him more money and more control.

Meanwhile, Tae-kyung is stalwart. 3 Days became much bigger than its namesake, pushing beyond simply needing to clear Tae-kyung’s name. With the dynamic between Do-jin and President Lee, it was inevitable that Tae-kyung’s story would be pushed back to a secondary story line.

At this point his desire to understand why his father was murdered has long since been abandoned as he shifts his focus to protecting the President at all costs. At times his blind devotion to his duties becomes frustrating. The President constantly asks Tae-kyung to put his life on the line to keep him alive so he can “make things right.” But at one point President Lee finds himself incapable of holding up his end of the bargain, willingly going to meet Do-jin alone, knowing full well the crazed director’s only goal is to kill him.

Still, Tae-kyung protects the President even when the President voluntarily puts his own life at risk. Unsurprisingly, this makes Tae-kyung the most noble character in the show. He’s our intrepid hero, hell-bent on preserving the sanctity of the Secret Service, whose job it is to put their lives on the line for the President’s protection. 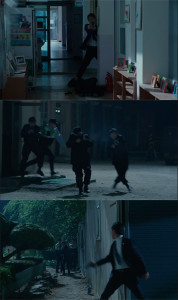 The last few episodes also saw a ridiculous amount of deaths. One viewer even commented episode 15 was obviously written to the soundtrack of Drowning Pool’s “Let the Bodies Hit the Floor.” Almost everybody in the Secret Service was wasted. The shootout between Blue House bodyguards and Do-jin’s men is on such an epic scale it’s almost comical.

However, again, Kim manages to make the outrageous and predictable work for the narrative scope of the show. This OK Corral-style showdown has an element of necessary shock that allows the viewer to finally understand the moral polarity between those who want the President dead and those who would defend his life to their last breath.

The last episode was halfway well-executed. On the one hand, we finally see Do-jin’s inevitable demise, and the way in which it’s accomplished is the show’s most poetic: President Lee coaxing Do-jin to detonate the whole town of Yangjinri, declaring that his deeds will come back to kick him in the jiggly bits, then essentially acting out his own attempted suicide bombing, as if content with the fact that in order to save his citizens and end Do-jin’s life he must sacrifice his own.

Truly, President Lee may be the most fatalistic character in drama history (okay, that’s probably an exaggeration). He absolutely sees no other way to both protect his citizens and fulfill his penance than to actually give his life. Even if Do-jin was the show’s most compelling character, a collective sigh of relief had to be loosed when it all finally—and literally—blew up in his face.

Then episode 16 goes the way of the hasty wrap-up—tying up loose ends, namely regarding Tae-kyung. A few montages fill up the time left over that the last bits of the script couldn’t completely fill. The most laughable part of the show by far was the eventuality of the romantic tension between Tae-kyung and Bo-won. While the development of their attraction was both natural and subtle, as far as K-drama romances go, the requisite montage of their “romantic moments” was probably the most ridiculous thing I’ve seen in a drama.

Set to Gummy’s emotional belting of the show’s love theme, we get a series of moments in which the pair is just trying not to die: getting run over by a twelve-wheeler, getting shot and blown up, suffering countless gashes and bruises. All this spells romance. But I guess for 3 Days, what else can you expect? Poor Tae-kyung and Bo-won.

The closest they ever got to an actual date was in episode 14, when they finally think the dust has settled and Tae-kyung asks Bo-won if she’s eaten. He then commences to order every item on the menu, saying essentially, “When I get a chance to eat, I make it count.” I will admit, though, Kim didn’t make Tae-kyung out to be some smooth secret agent. He is truly useless as a romantic lead, thus further establishing his character’s dedication to his chosen occupation. 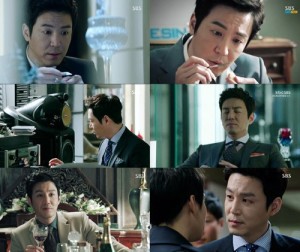 Ridiculous potential romance aside, the characters were strong and propelled the story forward at a reasonably level pace. The show’s obvious star was Choi Won-young. Without a doubt, he was the show’s MVP (in this case, most vicious psychopath). He portrayed Do-jin with such chilling precision, I’d be surprised if he wasn’t at least nominated for a few awards this season. He’d certainly be deserving of any and all accolades that came his way.

3 Days is mostly successful. It tells a straightforward story and doesn’t stray too far from Kim’s goal. Though there are moments of obvious predictably, the show was intriguing enough to at least be one of the better action dramas out there, if simply because it maintained its due course and didn’t get drowned in subplots. At show’s end, I can confidently say 3 Days was a great drama experience that ended at the right time and made for an exciting viewing experience.