Side B: A Pink Pop with Sweetness 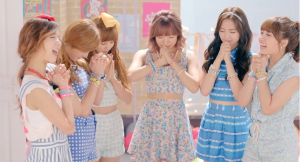 A Pink, a group known for their old school bubblegum pop sound and cute image, recently staged a comeback with their 4th mini album Pink Blossom. Their distinctive use of bubblegum pop is noticeable throughout their discography, but there are quite a few tracks that add a new spin on their wistful formula. Their later albums especially hint that A Pink may be heading towards a more nuanced, contemporary pop sound. Even if their concepts revolve around the pure and innocent image, their throwback aegyo image makes them novel among their contemporaries.

In addition to their unique musical style, A Pink benefits from their stellar lead vocalist, Eunji. At times, the overused high note can come off trite, but when given the right song and moment, her voice soars sweetly. The other vocalists in the group Bomi, Naeun, Chorong, Hayoung and Namjoo have steady voices and contribute to melodic harmonies. There are noticeable producers present in much of A Pink’s earlier works. Shinsadong Tiger and Super Changddai helm a good portion of the tracks, helping to develop the distinct color of A Pink’s sound.

A Pink’s debut EP Seven Springs of A Pink featured a slew of catchy pop songs. “Boo” stood out for its synth-heavy production. The song has an extremely bubblegum chorus but is able to create a more modern K-pop sensibility with the use of audio technology. The autotune and rapping section from Chorong and Namjoo allow “Boo” to display a good sense of rhythm. The lyrics express the charming desires and thoughts directed towards their love interest. It is all a bit sweet but the production helps to keep it from being too saccharine.

Sometimes, the production of A Pink’s songs can be polarizing. This is the case with “Yeah.” The song produced by Shinsadong Tiger and Choi Kyu-sung feature the girls singing in hyper speed. The BPM is no joke. At times, the vocals approach a chipmunk-like tone. Even though the song is a sugar rush, I find the tempo of the track and feeling of the song thrilling if not exhausting by the song’s end.

“Cat” is an absolute gem in A Pink’s discography. The words are in line with A Pink’s lyrical history, but they stand out for utilizing a feline metaphor. Their curiosity and wide eyed bewilderment is expressed through the context of the anthropomorphic cat. The jazzy piano melody adds to the character of the song. It is charming, aloof and overall a great song from the group.

Even though a good portion of A Pink’s songs feature lyrics expressing their feelings for a love interest, “Up in the Sky” (featuring Junhyung from Beast) does not. The lyrics look to inspire positivity in reaching for one’s dreams. All in all, their first full album Une Annee was truly an avenue for A Pink to showcase that they were more than a bubblegum novelty act. The album featured degrees of variety with songs like “Cat,” and this song showed more adventurous lyrical content.

Before their Secret Garden promotions, A Pink lost a member, Yookyung,. After their first album found moderate success, this mini-album solidified A Pink as a top girl group in K-pop — it has been their most commercially success release to date. While “Lovely Day” doesn’t deviate from the lyrical commonality in their prior tracks, the instrumental helps to highlight the girls’ crisp vocals. The use of instruments, like the piano, helps to give the song a fresh and organic atmosphere. The vocals are expressive and the song emits warmth.

Finally, I want to highlight a track that embodies the essence of A Pink. “I Need You” is a bubblegum mid-tempo track that is also grounded with its use of guitar and stringed instruments. While the production on some of their older songs occasionally overtakes the vocals, the girls all sound great on this lighter track. Eunji’s stellar vocal delivery and full tone is on display here.

While other girl groups have been transitioning to a sexy concept, A Pink have made a name for themselves with their consistently cute image. They have a vice grip on the aegyo corner of the market, and their b-sides have only served to further that depiction of them. Their earlier releases were especially distinctive because of the unique nostalgic use of bubblegum pop. Since then, they have slowly grown to take on more nuanced productions. Hopefully, as they continue to grow, they will find more ways to take chances even if they are kept within the confines of their concept.

We hope you’ve enjoyed this edition. Check out our other Side B features and let us know who you’d like to read about!