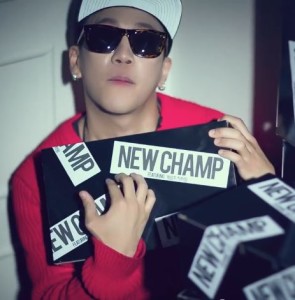 Although he’s been active in the underground rap scene, as a member of NewBlock Babyz Crew, rapper New Champ has finally made his official debut with “Yahage”(“provocatively” or “sexy”). Enlisting the help of label-mate Kye Bum Zu and Ji Hee Pil, New Champ requests his girlfriend dress less provocatively.

Lyrically, New Champ should get a little bit of benefit of the doubt. Telling women how to dress, especially when you are their boyfriend, is largely seen as controlling and misogynistic behavior. And yes, expressing jealousy for others when they look at your girlfriend is usually frowned upon. Rightly so.

However, in this instance, I don’t believe that is the intention. Fully looking at the lyrics, New Champ doesn’t want his girlfriend to show her sexiness to everyone, and sometimes, including him. He finds her sexy even in jeans and a sweatshirt, or when she wears light makeup. The song is a message in “less is more,” but not meaning wearing less clothing. There’s excitement in the mystery and normalcy. Since there’s no mention of locking her up away from the world, or other such things, the song should slide as simply an admiration of beauty.

Additionally, given how much we complain about the oversexualization of females, especially recently, in K-pop videos, there should be a tiny bit of appreciation at someone speaking out about women covering up a little. Maybe not stated the most eloquently, but New Champ does make a point: one does not need to show a lot of skin or wear tight clothing to be sexy.

And let the beat drop. The bass truly comes out of nowhere. There is no subtle lead in, or other instruments, just Kye Bum Zu singing the first line of the chorus, and then suddenly we are overwhelmed with the bass line. Not that it’s a bad thing. Hip-hop and R&B song thrive on their bass lines. Essentially, we are instantly put in the groove of the song.

Because the bass line is so heavy, other instruments are mere background. There’s not much to say in that regard, since it tows the R&B line. However, appreciation must be expressed at how great Kye Bum Zu’s voice is on the song. He’s once again showing off his distinct and impressive vocals, and is a good addition to the track.

As to the MV, while good, there is one pitfall: the opening. The sound of heels on the floor has to be one of the most annoying sounds, ever. Yet, they constantly appear in MVs. Can we please stop this trend? It’s not a good start, especially for a debut MV. It is truly pointless and serves no real purpose, except maybe to give listeners the illusion that there are women really walking down the halls. Who really wants to hear that? Nobody.

Naturally, this wouldn’t be a MV about sexiness if there weren’t some sexy girls. If you want no other reason to watch the MV for “Yahage,” watch it for After School’s Kaeun, BEStie’s Uji, and Hello Venus’ Lime. These three gorgeous girls are the object of New Champ’s affections. Wow, do they look great, or what? The ladies put on a sexy fashion show, only to be told to change over-and-over again because the outfits are too sexy. That sounds incredibly unbelievable, but that’s what happens. We can suspend disbelief just for the MV.

It was a bit surprising at how dorky New Champ is characterized in the MV. While there are some more “swaggy” scenes – particularly those with Kye Bum Zu – there is mostly just New Champ hamming it up in a cute manner. For those who like derpy faces, this is a good MV to watch. There is no real attempt at trying to be attractive. The facial expressions were so overboard and exaggerated that some were worthy of cringing. However, that’s what made them so good. New Champ was able to fully express the emotions involved with the lyrics and MV plot, and does so in a great comedic manner.

The ending was fantastic and the best part of the MV. All, or at least most of us, love an unexpected and humorous closing scene, and “Yahage” delivers. It’s every fans life. Fantasizing about someone, but realizing you are simply a spectator. Stroking a screen, eating ice cream at home, and ugly crying alone.

We can probably all relate to New Champ on some level. Perhaps that’s the message of the MV. As fans, we constantly complain about sexualizing biases and wanting to keep them – and all their hotness – to ourselves. The “Yahage” MV is our thoughts in video format.

With a unique voice, and great support group, New Champ is poised to make a few waves. New Champ will also be participating in Mnet’s Show Me the Money 3, so keep an eye out for this up-and-coming rapper.