It’s no secret that abs are central (or should I say ventral?) in the highly calculated regime of “perfect” idol bodies. The near-impossible-to-achieve ideal of flat stomach, chocolate abs, rock-hard definition, is a source of major fascination and fan pleasure–there are entire blogs dedicated to the worship of idol midriffs. Yuri, Krystal, Jungah, Soyu, and Hyoyeon are a few regular names that surface whenever discussion of abs arises. For this week the topic is the message behind female abs exposure, and next week I’ll be talking about male abs, since males in K-pop are also very subject to bodily scrutiny. (Also, click the links in the article for images, please!)

Abs have always been around in K-pop, but the way they are put on display today is different than how they were shown–or not shown–ten or even five years ago. Looking back on earlier successful female groups, it’s relatively difficult to find images of Fin.K.L. or CSJH The Grace showing stomach, and when there is an image, it is connected to values of youth or girlishness rather than power or sexiness: the idea of outgrowing clothes during teenage puberty, resulting in a shirt a size too small. Moving forward to SNSD‘s debut, it’s surprising to find that their outfits do show abs comparable to their outfits now, though still within the familiar concept of youth and innocence: a way of showing sex appeal without doing a sexy concept. In comparison, it is surprisingly more difficult to find images of the Wonder Girls showing their abs during this time period. In group pictures where the midriff appears, first Hyuna and later Yoobin (the designated “sexy” members) are the sole members to reveal. 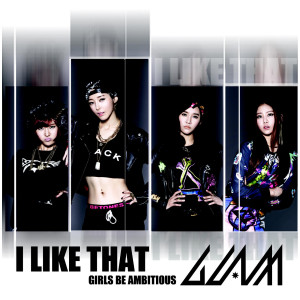 Exposed abs nowadays are often used to signify female power, choice, and sexiness. The top has become more cropped and less top for more and more groups. In MVs, girl groups show their abs with pride, confidently undulating in high-cut shirts or low-cut pants. The formula for a concepts seems to be abs, cleavage, and/or legs, whereas in the past it was more common to see only legs and/or maybe cleavage. I’m not saying that the message of “exposure is power” is actually true, but that many female K-pop groups, particularly those with “fierce” or “sexy” comeback concepts, promote this aspiration.

Let’s look at some examples. GLAM, though they do not wear high heels, short skirts, or cleavage-bearing tops, are marketed by putting talented B-girl Zinni front, center, and in charge of major abs exposure. As a group, SNSD‘s shirts got shorter for “Run Devil Run” and even more for “I Got A Boy,” when they donned sneakers instead of heels. After School, Girls’ Day, Dalshabet and Rainbow confidently display midriff on a regular basis, and rookies like M.O.A. and Kiss&Cry do as well. The old characterization of midriff as representing youth and innocence is still present–Apink show midriff occasionally, but it is more reminiscent of Fin.K.L or old school SNSD’s contexts of youth–and overall, the flashing of abs has become overall much more common and much more linked with confidence and body scrutiny than it was five or ten years ago. 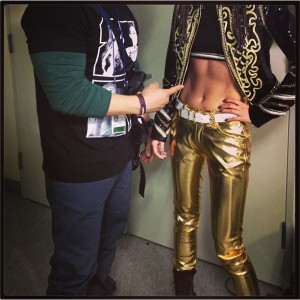 It doesn’t get much clearer than Dara from 2NE1 posting a close-up of her abs on Instagram, complete with a finger-point and English caption “Abs.” Society makes it permissible for a female idol to openly post a picture of her abs and receive praise for it, while I cannot imagine any female idol posting a picture captioned “my boobs” or “legs” without total backlash. Or look at 2NE1’s Minzy striking a confident, abs-exposing pose: think about how strange it would look if she were wearing a short skirt or an uber-feminine outfit and doing the same pose. In the media at least, toned abs are linked with confidence and strength, in a way that other ideals of female beauty like skinny legs and large breasts are simply not linked.

This brings us to “midriff advertising”, a term coined by Dr. Rosalind Gill. I’ve numbered the major points to make the definition clearer:

(1) an emphasis upon the body,

(3) a pronounced discourse of choice and autonomy, and

(4) an emphasis upon empowerment” —Supersexualize me, Dr. Gill

Gill writes mainly about midriff advertising in a “Western” context. I’d guess that we’re seeing the trend hitting K-pop a bit later than in some other specific music industries. In the United States and England, think Madonna, Britney Spears, Christina Aguilera, the Spice Girls, and overall the movement of 90s “girl power” pop, with Madonna paving the way in the 80s. There are definite similarities with the midriff trend in K-pop, though obvious differences exist as well.

Basically, what midriff advertising for K-pop means is that the sudden overstocking of chocolate abs in a hungry market comes with some values attached. The prominence of abs refocuses attention on a specific part of the female body, but while cleavage or legs are often marketed as “for male enjoyment only” and result in discussions of female exploitation, the abs are marketed as a symbol of female empowerment and choice–“she wears crop tops for herself” or the attitude of “she worked hard for it, why shouldn’t she show it off?” Midriff advertising is supposed to make women feel empowered rather than exploited. 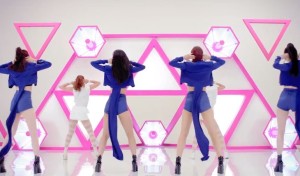 Why does this matter? Well, there are problems that come up again and again when venerating the abs as a symbol of power. Fact: Super-defined and toned abs are not achievable for the majority of the population no matter how much you work out or how little you eat. It requires an extremely low body fat percentage, and females in particular usually require a larger body fat percentage than males, making it especially difficult for women to achieve the flat ideal. Plus, idols can and do use makeup and shading to enhance the appearance of their abs, just like the shading of cleavage, and in some cases are known to have unhealthy diets or lifestyles. When people say that someone “worked hard for their body,” it implies that there’s a system where you can tell how much someone works out by the way their body looks in certain clothes. There is no system. Fitness is not just about working hard, but also having the spare time or the equipment or the resources to work out. What’s more, a small percentage of people naturally have flat abs without working out or diet restricting, so luck is also a factor in who can get hard abs and who can’t. 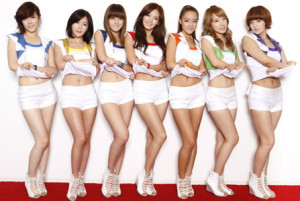 Abs are a more “socially acceptable” symbol of female sexiness and power, but what kind of power do they really hold? Remember when Rainbow‘s “A” choreography, where members pulled up their shirts by a few inches, was banned? Looking at many of the earlier article images, it’s clear that the purely scientific measure of abs shown when Rainbow raised their tops is many inches smaller than a whole history of abs exposure including Dara’s selfie or even “Into the New World.” So it’s not about the expanse of midriff shown. What is threatening about “A” is the action of miming undressing. What is implied by the ban is that a woman can strut onstage in a bra and skirt and be empowered (aka not banned), but to disrobe herself is inappropriate.

The standards for what is “sexy” for females are constantly changing. Is it preferable that abs symbolize empowerment rather than exploitation? Or is it misleading? There’s no right answer to these questions, but when it comes to midriff advertising and abs as a form of power, I’m curious: Do you buy it?