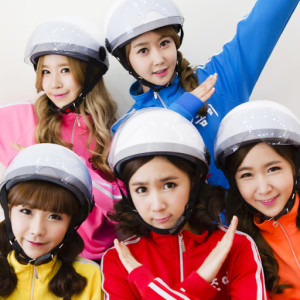 It is understandable that people were concerned about the content of Crayon Pop’s comeback. Crayon Pop’s “Uh-ee” is similar to PSY’s “Gentleman” in that it is the successor to an extremely popular global YouTube sensation. Although “Bar Bar Bar” didn’t quite reach the level of “Gangnam Style” it was still considered a serious contribution to the eccentric side of the hallyu wave. Luckily, fans will not be disappointed with the song “Uh-ee” as it meshes perfectly with the group’s image and past discography.

Crayon Pop are known by most people as the queens of headgear and track pants, which is simultaneously used as a compliment and an insult. Many viewers seem to find the group’s quirky demeanor jarring and use it to condemn them as nothing more than a marketing gimmick. However, if you look beyond the popularity of “Bar Bar Bar,” you’ll see that Crayon Pop hasn’t given up some grand artistic image to pander addictive electronica in the name of sales; this was their image from the beginning.

Starting with their debut song “Bing Bing,” Crayon Pop has kept similar elements throughout their promotions – which is far more than we can say for groups that flip-flip sexy and cute. The group has always had funny dances and they’ve always worn outfits that complimented the dances instead of resorting to high heels just for the sake of image. All of their singles have had a similar sound as well, and while that can be written off as “boring” I prefer to think of it as pleasantly consistent in a genre that is extremely fickle and trend-based. 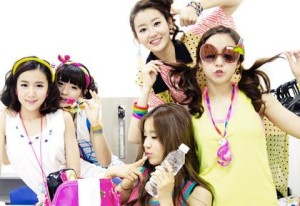 Another thing Crayon Pop has done consistently is release singles that are actually “singles.” Each of their songs tends to get released alone and then promoted before releasing another song. If you look at their album releases they are collections of the same songs over and over again with a one new track, or a new version, thrown in. They aren’t relying on filler songs and that means they have to pack a bigger punch with the one single they do promote to make up for it.

Crayon Pop has proven that they are capable of pulling off extremely catchy songs that have an equally catchy silliness to them, which brings us back to their new single “Uh-ee.” Dressed in work clothes and rubber shoes, the group takes on a new themed look. The song itself is influenced heavily by trot music and is being described as electronic house bbongjjack. Who knows which came first the song or the outfits, but both evoke the feel of an older working woman.

The combination of Crayon Pop’s trademark sound mixed with the upbeat trot makes for a catchy song you can’t help but bounce along to. On first listen, the chorus was a bit surprising because it didn’t pick up pace or volume like I expected it to, however after another listen I found myself liking the changes in tempo and the little sound effects the members created. The back beat lives up to the “electronic” description and it is what keeps the song addictive throughout. As vocalists, Crayon Pop manage to capture that trot sound while still keeping their own flair. 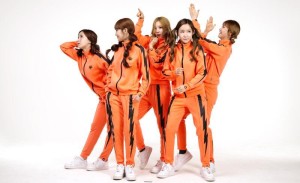 Yes, the song is similar to their past work, and yes, they are all still wearing matching outfits that have a theme, but those aren’t things to complain about. Crayon Pop keeps coming back with singles that fit their original concept and aesthetic despite the pressure in the industry to change constantly. Even if some onlookers may not enjoy it, the ladies of Crayon Pop are always eager to express their happiness with their concepts and how they contribute to the creative process.

If you aren’t into this type of music than the solution is simple; don’t listen to Crayon Pop. They’ve been clear about who they are from the beginning and it doesn’t look like they are going to change any time soon. There isn’t anything wrong with sticking to a concept, in fact it should be celebrated, because it means we always know where to go when we need to cheer up, or dance around, or just feel happy. I understand not being a Crayon Pop fan, they are marketing to a niche, but what I don’t understand is hating them when they’ve simply been true to their group’s concept. I give this trot-tastic song a rating of 4/5.