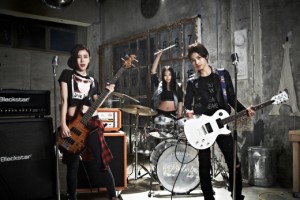 It’s hard to keep up with the flood of rookie groups into K-pop this year, and it’s only April! So I’ve prepared a roundup of larger rookie groups that had substantial debuts but weren’t reviewed on Seoulbeats. I’m including groups that debuted from January through March and that have over 20,000 views on their MV; I’m also sticking to only official group debuts, so no solos or sub-units. In no particular order, here are my brief reviews and predictions for these groups’ futures, along with their relevant stats like debut date, MV viewcount (at the time this article is being written), number of members, and company. If you missed any of these debuts, this list will hopefully give you an idea of which groups you might want to check out.

They obviously attempt the flower boy concept with cute facial expressions and a English chorus of “she’s my baby love” and “you’re my only one,” but some stylistic choices detract from the usual safeness of the “cute” concept. Much of the MV is in black and white, which automatically creates a somber mood for what should be an uplifting, cute concept. When the requisite rap break hits, the appearance of a stereotypically “macho” car is as confusing as the rapper sitting on the ground, outside the car, leaning on the driver’s side door. The dubstep influence intensifies after the rap, as well, which negatively impacts the cuteness of the song’s message. I also had to watch the dance practice to discover any idea of what the dance actually looks like, since it’s barely shown in the MV. They are synchronized, but certain members are clearly much better dancers than others, and their choreography features too much walking and standing and lacks enough complexity to compare to other recent male groups. I would place this as a forgettable middle-of-the-road debut, especially considering they have previously debuted in Japan.

This sexy concept MV is disjointed and confusing, as is the song. There is a ton of disorienting camera movement, overuse of low angles, and plain blurry shots, reminiscent of Stellar’s “Marionette,” except worse. The members’ skills are similarly underwhelming; there is way too much nasal talk-rapping from multiple culprits, and the half-baked, boring choreography fails to be sexy, especially with their ill-suited “army outfits” designed to show as much leg and midriff as possible. The techno dance breaks don’t work for the song or the MV, because the members’ forced expressions and choreography don’t match the frenetic beat at all. But the most baffling moment is when they suddenly break into LMFAO‘s former hit song and yell verbatim “Shots, shots, shots, shots shots shots EVERYBODY!” This group already had some member retention issues: right after debuting, Jelly and Yui left the group, only to be immediately replaced by Dain and Gina. Sadly for MOA, I do not predict this group sticking around for long.

This glamorous group have the most YouTube views of the bunch for good reason! From the MV’s start, Kiss&Cry are extremely confident and comfortable in their vocals, dancing, and their concept. The concept itself is mediocre, just another in a sea of sexy concepts, but the MV is executed well with a variety of scenes, the girls are fierce dancers and great vocalists, and the song makes up for the uninspired concept. It’s a catchy melody with a Latin-inspired beat that isn’t heard too often in K-pop; they also forego the usual rap break with a pure vocal line, which shows that this group will definitely be a power singing group, similar to Spica. You may recognize also main vocalist Dia from her popular cover of “Let It Go,” and her high ad-libs and belting are similarly superb in “Domino Game.” I’m tapping this group as definitely one to watch.

I’m giving SoReal credit for doing a ballad, which is always a risky debut choice. The slowed pace, gentle sound automatically helps them stand out from the usual upbeat, often club-ready debut songs typical of this year’s rookies, but debuting with a ballad means you have to knock it out of the park vocally and in the MV, and I don’t think this group does that. The members do their best to act their ways through very demanding emotional scenes but are not entirely believable in the final cut. The song has a mild, unmemorable melody, and the highlight is the innovative key changes in and out of the chorus. Overall it’s a forgettable debut.

They have the most elaborate costuming and sets of the groups reviewed today, and the styling choices are satisfyingly consistent and meaningful. Wearing fishnets, jean shorts, motorcycle boots, and baseball caps and set in an abandoned warehouse, a decrepit bus, and a dark stairway, the MV makes it excessively clear that Billion are going for a urban, tough concept that fits the proud, catchy message of “Dancing Alone.” A weakness is that the members don’t dance very much, and during the obvious techno dance break, male dancers instead enter to show their skills, which leads me to think Billion may be lacking in the dance department. Also, the black male dancers are obviously phoned in to add more “authentic street style” to the concept; it’s like every stereotypical signifier of urban culture was thrown into one MV. Billion have already drawn comparisons to 2NE1 for their concept and their looks (and difficulty with lip-synching), but this comparison is only bound to negatively affect Billion’s reception, since 2NE1 are well established as a top group. I think this is a group with potential that will stay around for multiple comebacks if they can avoid the 2NE1 copycat reputation. 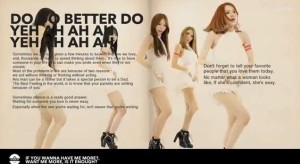 Like MOA’s “I’ll Call Ya,” this MV confuses me. It is another sexy concept, but there is also a theme of books and words that unfortunately fails to raise the debut to a new level. The entire MV is overlaid with a book spine, but words are also constantly projected over the members’ bodies. The end product falls more into advertisement or infomercial territory with the repeated chorus of “do do better” displayed onscreen. The words and the image obscure each other, so that I can’t see the members clearly nor can I read the words; the black bar at the bottom of the screen creates more confusion. The song is repetitive, as is the easy dance, and none of the members stands out vocally.

The cheerleader and schoolgirl concept is at full strength with Seventh Grade Class One, if you couldn’t guess from their group name and debut song title alone. “Oppa notice me” is the lyrical theme of the song and the MV, but it quickly becomes grating, with a fair dash of creepy. I say creepy particularly because unlike the obvious comparative of Girls’ Generation‘s “Oh,” “Oppa Virus” includes many actual men in the MV, and many of these men are old enough to actually be the girls’ fathers. The group direct their overflowing aegyo to an older businessman, a doctor, a soldier, among others. Bit-na also receives much more screentime than the other girls for no apparent reason. The song is cutesy without a discernible hook, the choreography simple, and nothing gives the members the chance to show unique or impressive talent. I’m curious as to whether the group’s gimmicky concept has staying power, but this debut does not inspire me to become a fan.

I saved my favorite debut for last. Bebop are a female K-pop band who play their own instruments, which lends them an impressive authenticity onstage. Not only do they have impressive vocal and musical talent, “I’m The Best” is an interesting and new concept that has a clear theme, a variety of cool sets and costumes, and a song that perfectly fits all of the above. It’s essentially a commentary on how female idols are forced to compete with each other in the entertainment industry. The members wrestle each other in a boxing ring, try to push the others out of the frame, and have a full-on food fight at a fancy dinner, all while ironically singing “I’m the center! I’m the center!” The song has a clear rock influence, which fits the chic and edgy styling of the girls in the band scene and highlights their musical abilities. This rebellious group are my new favorite rookies, and I encourage you to check them out.

Kiss&Cry and Bebop are my picks for rookies to watch, with Scarlet, Seventh Grade Class One, and MOA as my least favorites. I’d also like to mention a significant non-idol debut: Fresh Girls, a keyboard-guitar playing female duo who impressively visited every region of South Korea in their light spring MV “Fresher’s Song,” currently at 20,000 views.

So far we’ve seen BEAT WIN, K-much, Melody Day, MAMAMOO, GOT7, Seventh Grade Class One, Kiss&Cry, Lip Service, Bebop, MOA, 1PS, Scarlet, Wings, SoReal, Troy, Billion, and JJCC. Next week, I’ll take a look at even smaller rookie debuts like Aila and Vetty L. Let me know in the comments: Which groups are you keeping an eye on? Which ones disappointed you?