Thankful for BESTie's "Thank U Very Much" MV 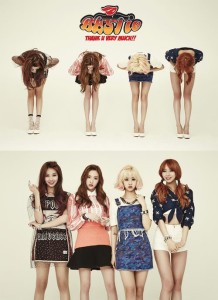 When you go through a big breakup there is a period of mourning during which no music seems appropriate except for dramatic ballads like MBLAQ’s “Cry,” but once that period is over you need something to pick you back up. This is why I love girl group songs about confidence and friendship being important after a breakup. SPICA’s “You Don’t Love Me,” GLAM’s “I Like That,” and now BESTie’s newest single, “Thank U Very Much,” are all songs that fall into this category.

All three of these songs also have MVs that match their songs’ lyrics – which in K-pop is always an added bonus. BESTie’s new song is definitely the most playful and fun of these promotion, though. SPICA’s song is powerful and confident, but also has a touch of man-hating in it. GLAM’s song defies society’s expectations of what a girl should do after a breakup, but it too has a negative edge to it. “Thank U Very Much,” on the other hand, focuses on the positive completely in both song and MV. So your boyfriend was a jerk? All the better for you! Might as well thank him for giving you a good excuse to get on with your life.

“Thank U Very Much” isn’t a feminist MV that speaks for women’s rights or anything like that, but it does encourage women to leave their romantic partner if they are being treated poorly. It gets tiresome searching for positive messages for being single in K-pop so even something as simple as being happy after a breakup is a theme worth appreciating. Many women – and men – can relate to the desire to hang out with your friends and to just get over it after a relationship ends so even if this song and MV aren’t going to inspire the next Nobel Peace Prize they might still make someone newly single feel better, and that’s worthy enough. 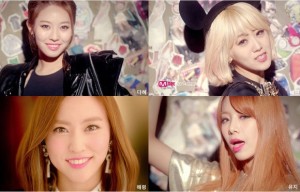 The MV itself isn’t ground-breaking or artistic, but it is fun and has good consistency in theme. Starting out with the main character looking at a doodled photo of her ex-boyfriend was an excellent way to set the tone for the MV; it lets the viewer get a sense of the story in the MV. The story continues as you see the main character complain to her friends as they comfort her, and it all culminates in a friends-night-out at the arcade where the group does a convincing enough job of looking like they’re having fun. It isn’t complicated as far as storylines go, but at least it is coherent – unlike lots of other K-pop MVs.

There was a good balance in the attitude and wardrobe in this MV. You couldn’t put your finger on it and say it was a “sexy” or “cute” concept, rather it combined a little bit of both into the healthy amount of fun. The blonde member fighting with the claw machine was cute and humorous and the other members interacting with her and trying to lock her in just made it cuter. Overall the blonde member provided a nice contrast to some of the other members in their sexier outfits. Her solo dance moves tended to be the cute ones while the taller, brunette members tended to be focused on for the sexy movements and alluring facial expressions. 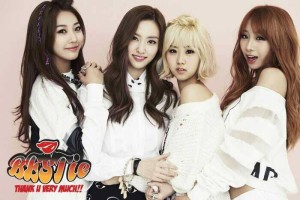 Other than the moments when they focused on one member, the choreography was basically non-existent but the little that they did show was either the typical butt-shaking or the typical cute arm movements. Luckily, they didn’t actually show much of the dancing so the lack of an original choreography hook wasn’t as detrimental to the MV as a whole. The outfits, as well, occupied the spectrum of both cute and sexy. The members had individualized outfits which allows for more personality to shine through. It was a nice balance of cute shirts, belly shirts, long-sleeve tops, and cute headgear, but boy were the circle lenses ever noticeable.

In the end, “Thank U Very Much” is a catchy song with a fun MV that doesn’t feel try-hard or boring. It is the type of MV that focuses more on matching the song than matching any specified “concept,” and that is what makes it appealing. It is the type of song to put on when you want to feel better about yourself or when you are getting ready to go out with friends. I’d like to see BESTie keep this fun attitude in their future promotions and hopefully they will continue to be given songs that show them as confident in themselves rather than pandering to others.