OSTs often go unnoticed, since they boast little promotion activities and rarely rank on the charts. With this big chunk of quality music flying under the radar, we’ve decided to start this new segment, which resolves to bring to light some of the best OST releases of the month, whether it’s from dramas, sitcoms, or movies.

Many dramas debuted this month — Three Days, Sly and Single Again, God’s Gift – 14 Days and so on, so we are fortunate to be blessed with the presence of quite a number of OST powerhouses.

Without further ado, let’s look at the best soundtrack tracks of March, featuring songs from the aforementioned dramas:

Oof, this track is just beautiful — the melody, the chorus, everything. The piano instrumental is amazing to listen to, but the chorus is a whole class act of its own. The sorrowful lyrics, combined with the haunting melody line and Shin Yong-jae’s soulful vocals allow for an extremely satisfying listen. Excuse me, while I replay this for the tenth time.

It’s a recognition of talent by the industry, when one is invited to record an OST. It’s an even higher level of recognition by the audience, when the single ranks high in the charts. No one can deny Eun-ji’s vocal talent in this song, her control and stability of her voice is practically perfect. Hopefully someday, someday, Cube Entertainment will be wise enough to give this girl a solo album. Too bad though, that she got demolished in March Madness.

I tried very hard to limit myself to choosing too many OSTs from one drama, but damn if Three Days didn’t pull out the big guns for their OST package — 4Men, Eun-ji, and then now, Gummy. Now that Gummy has jumped ship to C-Jes Entertainment, it’s great to see her get some exposure through labelmate Yoochun‘s drama. And of course, she doesn’t disappoint as her undeniable vocal talent shines through in this mellow soundtrack.

Lee Hong-ki‘s “Words That I Can’t Say”, Bride of the Century

I was initially planning to include AOA ChoA‘s version of this song, but then Hong-ki released his own version and just totally blew me away. I’m pretty sure anyone can easily identify Hongki’s voice, which has a very unique husky tone. It also makes every song he sings sound like a break-up song, which fits this to a T. This song could easily be passed off as an FT Island song, except one that’s much more toned down and raw. A great song, and all the more so because of Hong-ki.

2Young’s “My Girl”, Bride of the Century

The first non-depressing track in this list. In the OST world, it’s probably rarer for cheery acoustic tracks than for those emotional ballads. That cold be why this track is such a breath of fresh air. I’m never really heard of 2Young, but I definitely like their acoustic sound in this track. It’s laidback; it’s fun; it’s sweet; and I can definitely see myself listening to this song, while lying on the beach in summer.

Yoo Seung-woo‘s “What Do I Do”, Sly and Single Again

It’s a challenge to listen to this song repeatedly play in the drama, and not have the chorus stuck in your head, or rather, just that first line of the chorus. In any case, it’s unexpected for a song with such forlorn lyrics to have an upbeat rhythm that leaves my head bobbing.

A light-hearted and fun song, they chose appropriate candidates to bring across the excitable romantic atmosphere. It’s encouraging to see that J-Min is still alive and kicking, at least with regards to OSTs. J-Min and Dohee have pretty distinct vocal colours, and it’s an interesting, albeit random, choice to let them do a duet. I think it’s telling that J-Min is the stronger vocalist, especially since her parts are the ones most frequently used in the drama.

Some other notable releases from Sly are 1sagain & Just‘s “Beautiful Girl” and Sunny Hill‘s “Cunning Thoughts”.

If you can look at the lyrics alone, it can easily pass off as a love ballad. And then you think of God’s Gift and its characters, and then it hits you like a ton of bricks. Instead of describing a breakup, the lyrics are actually referring to a mom’s desperation and grief at the loss of her daughter. Then, all of a sudden, the songs takes on a whole different meaning, and Ji-eun carries her end of the stick impressively.

Another vocal powerhouse taking part in the OST showdown. This is probably the few songs of Yangpa that I’ve heard, and damn if I’m not constantly amazed at her abilities. Her vocal undulations and big notes makes this song engaging, and never veering into boring ballad territory.

Hopefully, the readers aren’t getting whiplash from this alternating mellow and upbeat tracks. LC9 is a group that died off after their disastrous debut, but wow, this track shows their vocals and talents a whole lot better than their electronic debut mess. Such a pity too, because the boys seem to have pretty decent vocal ability and distinct vocal colours that hint at the good amount of hidden potential. Maybe they should give the acoustic sound a shot.

Dasom & Kim Tae-hyung‘s “Ya Ya Ya”, Love Rides the Song

Ending off with this bright and unique track, this is actually Dasom’s OST debut. It’s a really fun track, featuring a variety of styles — the choral of voices, the duet back-and-forth, it almost sounds like a track of a musical production. I’m not watching the drama, so I’m not sure when this track plays in the background, but I do hope, at the appropriate moment.

So that’s my (extensive) list of OST standouts, what are some of your favourites? 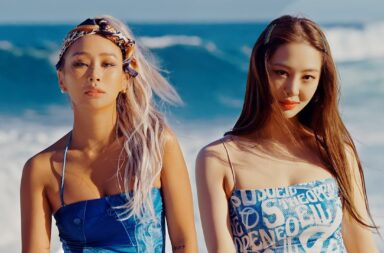