Living in a "4Minute World" 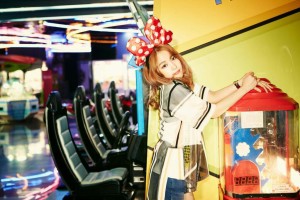 Almost a year since their last Korean venture, the ladies of 4Minute are back with a new mini-album. Their last release, “What’s Your Name?” and “Is It Poppin’?” were both hits in Korea, cementing their place in K-pop-dom even more, if anyone doubted their relevancy that is. Their singles last year proved to naysayers that they do have a sound that, while similar to several other artists (and I blame Brave Brothers for this), is completely their own.

Titled 4Minute World, the quintet gives us five tracks, all exploring the comfortable niche that they have found in K-pop. Nobody does sassy, playful, flirty, spunky and fun music like 4Minute and this mini-album explores further into the sounds they experimented with in their previous mini-album and all other releases before.

Surprisingly, the mini-album does not open with an intro track, something 4Minute and Cube artists in general are known for. If you are like me, “Wait a Minute” will having you repeating those very same words when you realize that this isn’t one of those minute-long affairs. Instead, the song goes for three minutes and is structured like a regular song. It sounds like one of the intro tracks 4Minute usually have and thus it seems like someone decided to try extending that intro track. Isn’t it a common complaint in K-pop, having intro tracks that people want to hear as whole songs? This is exactly what 4Minute does as the MIDI drums and instrumental plays on, exciting us for the incoming onslaught.

While it is a whole song, “Wait a Minute” still feels like an intro track to me, which isn’t a bad thing. While it is over the minute-long boundary, it still does its job to grab the listeners attention and win us over. It gives us a glimpse of what is to come, of what this album will be serving to us in its 18 minute duration.

Additionally, the track transitions smoothly, almost effortlessly, into the promotional track, “Whatcha Doin’ Today?” This is despite the different tones and melody that each song has. While “Wait a Minute” is more of a song to pump the energy of a person, “Whatcha Doin’ Today?” has a more playful tone, one that is more overt than the previous track. And yes, that is possible with these ladies.

The song talks about asking a guy out — a simple premise, really. The ladies play with the different concepts of a date – from asking him if he’s available to go get a cup of coffee, to go to the amusement park, etc. This is all played out with a subdued (for 4Minute that is) melody during the pre-chorus that picks up as the chorus soars right before slowing down for the verses.

After keeping the members in their traditional roles for the last two singles, this song sees a return of vocalist Ji-yoon sharing rap duties with Hyuna, a much needed contrast. Hyuna’s rapping is more on the cutesy style that can be quite jarring to the ears in large doses. By having Ji-yoon take over a couple of rap lines, it keeps the song from going overboard and ruinging the tone set up.

It is quite obvious why this is the lead track. From the dynamics we get from the song, the playful tone and spunkiness of the song, it’s exactly up 4Minute’s alley. It’s different from the tracks being promoted by other groups and will set them apart.

The third track is “I’ll Teach You” which is sung by Ji-yoon, Ji-hyun and So-hyun. It’s about time they split the group into two for some tracks. We hardly get to hear Ji-hyun’s voice in most songs and it’s a breath of fresh air to actually hear her sing for more than five seconds. It starts more steady and slow than the previous songs. It is slower in its build, opting for a slow and steady climb instead of the full-force climb 4Minute tends to use.

Lest someone thinks this song is a ballad or a mid-tempo track from the description above, it is not. Not straight up at least for it does go into a mid-tempo break right after the first chorus, at 1:10 for Ji-hyun’s wispy vocals.

Overall, this track is an interesting track to have in this mini-album, and interesting in all the right ways. I never knew I needed a 4Minute track like this until now.

The fourth track is a duet between Ga-yoon and Hyuna, and had caused a small blip of controversy for it’s lyrics which expresses a woman’s feelings for a man. It was deemed unsuitable for broadcast by SBS several days before the release of the mini-album. The reasoning behind this was because of the metaphorical expressions used in the song, something Cube Entertainment maintained as open to interpretation. Meanwhile, MBC has already given the song the thumbs up. Cube Entertainment stood it’s ground and the song was released as is.

And we should be happy that it was not changed in any manner. The song is the most mature we’ve heard from 4Minute, without going into the ballad territory. It is a song secure in the curves and bends of it’s rhythm and melody. Ga-yoon’s vocals are a contrast from Hyuna’s higher tone and keeps the song from going stale, if that was any fear at all. As a whole, it’s a slinky song with lyrics that can be considered as littered with innuendos.

Ooh, Sweet body
Uh uh you’re sweet like a custard
This is probably your first time feeling this
Ooh, Sweety honey
You won’t be able to forget me tonight
Uh uh

I’m a slightly dangerous girl at night
Baby, I’m so dangerous
Don’t hesitate and come deeply inside
Hug me baby, touch me
Let’s go crazy as if tonight is the last night
It’s breathtaking oh my paradise
No oh oh

And to that I say: more power to you, 4Minute, for making the song work. Here’s to hoping we get more in the next releases. K-pop needs some more mature, dual-meaning songs from females.

The last track is “Thank You :)” and yes, that smiley face is included in the track name. It is the slowest track in the album and is an excellent exit from the energetic mini-album. Carried largely by a guitar, the vocals of Ga-yoon and Ji-yoon lifts any listeners soul and it is blatantly easy to see that this song was written with these two in mind. But So-Hyun and Hyuna shine as well, both having a rap verse and Ji-hyun’s voice is equally served with this song, though it does tend to be overpowered by Ga-yoon’s vocals just as her line finishes. 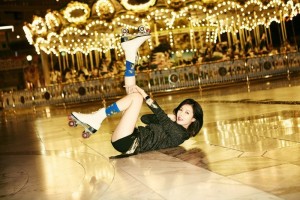 The album was quite a good listen, better than their last release. It explored the different sounds in their niche and expanded what sounds they had found comfortable for them from previous releases. It shows a constantly growing 4Minute and a production team that is more steady in their knowledge of not just what works with 4Minute but what sounds best for each members vocals. This is a good thing because 4Minute is comprised of members with diverse voices, more diverse than usual in K-pop given that there are times girls in girl groups sometimes sound the same.

It’s also apparent that while the Brave Brothers are everywhere and anywhere in K-pop, 4Minute is a client that will always get the freshest tracks. They aren’t going to get hand-me-downs and throw-aways. With this in mind, it is easy to see why 4Minute are so comfortable in their niche. Not only do their songs suit their general personalities, the songs are seemingly made for them and them only.

Needless to say, this mini-album will be something worth listening to over and over again. Must listens are definitely “Wait a Minute” for that pump in your energy in the morning, “Whatcha Din’ Today?” when you’re feeling a bit flirty in sight of whoever it is you’re crushing on and “Come In” for that seductive pull we never knew 4Minute (or rather, Ga-yoon and Hyuna) could do.